There has been some discussion of central bank forecasts and policy projections, including some blog posts by Tony Yates, Tony Yates part II, Narayana, David Andolfatto, and an editorial on Bloomberg.

The FOMC's dot plots are part of the economic projection materials published four times per year after the March, June, September, and December FOMC meetings. Many central banks in the world publish forecasts. For example, several times a year, the Bank of England publishes detailed forecasts in its Inflation Report. As far as I can tell, the Bank does not offer a projection of its policy rate, though it reports a market-based forecast of the policy rate. The Swedish Riksbank publishes forecasts, and also prominently displays a projection of its policy rate at the top of its home page, as a fan chart. The Bank of Canada offers inflation projections, but does not project its policy rate.

There are aspects of central bank forecasting that are very different from private forecasting, however. For example, the Bank of England, the Swedish Riksbank, and the Bank of Canada all target inflation at 2%, and they provide forecasts of inflation, which is the thing they are trying to control. Thus, implicit in the central bank's forecast is a policy exercise. The ultimate forecast is conditioned on a particular path for policy instruments, and the process by which that policy path was chosen involved alternative policy simulations - which would produce different forecasts. If monetary policy really matters to me, I would want to know a lot about that process. Indeed, I would like to know the path for policy instruments that underlies the forecast, the whole structure of the model that was used to generate the forecasts, and the add factors that were applied to the model to produce the forecast (trust me, the add factors are really important). But most central banks are too secretive to give me all that stuff (that's "me" as if I were you).

So what about the dot plots? In principle, this provides some of the information that people affected in important ways by monetary policy are looking for. Narayana gives a good description here of how the dot plots are constructed. Each dot represents what an individual FOMC member thinks the optimal policy rate would be at the end of each future calendar year, given his or her forecast of other macroeconomic variables. That's important. This is not an individual's forecast of what the FOMC will actually do, it's what the individual thinks he or she would do in the future if the world evolves in the way he or she thinks it will, and if he or she has ultimate decision-making power. Of course there's a lot the dot plots don't tell you. Which dot is who? Maybe that dot doesn't get to vote this year? What's the forecast of other variables associated with each dot? What's the model (if any) that was used to evaluate policy? It would be nice to know which dots are associated with who, so that I could at least know who to ask which questions.

Let's look at some dot plot examples (all from the Board's web site). Here's one from January 2012: 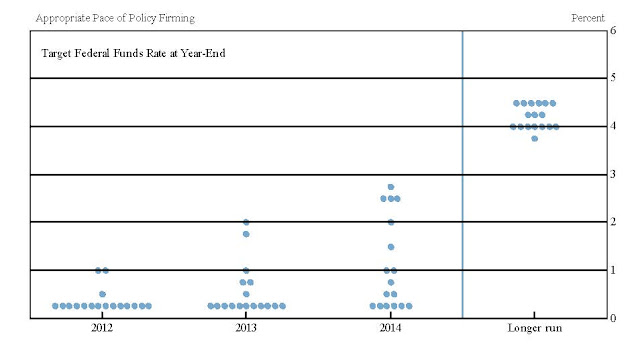 So, in January 2012, of 17 FOMC members, 3 think liftoff should happen by the end of 2012, 6 by the end of 2013, and 11 by the end of 2014. And in the long run, they're collectively thinking that the policy rate will be above 4%. So, what actually happened (liftoff in December 2015) appears delayed relative to that projection. But so what? Maybe the economy evolved in ways that these FOMC participants did not anticipate? Let's look at another one. This is for March 2014: 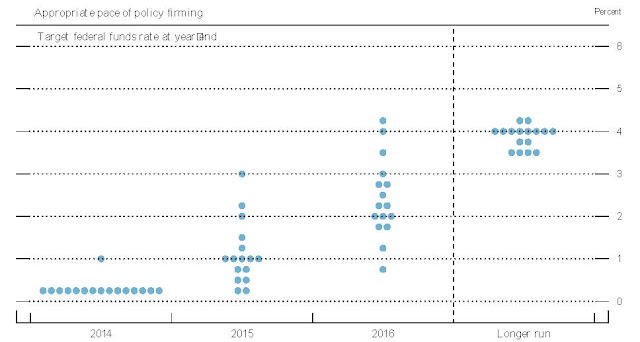 So you can see, comparing this chart to the last, that the committee's views have changed in two years' time. In 2012, they thought they would be lifting off by the end of 2014, but in March 2014 all but one are convinced that liftoff by December 2014 is off the table. For 2014 and 2015, the March 2014 projection is consistent with what actually happened - no liftoff in 2014, and liftoff by December 2015 (just barely). But, in March 2014, FOMC participants were predicting a policy rate that, on average, was above 2% by the end of 2016. That appears to be unlikely now.

Finally, this is the dot plot for September 2015: 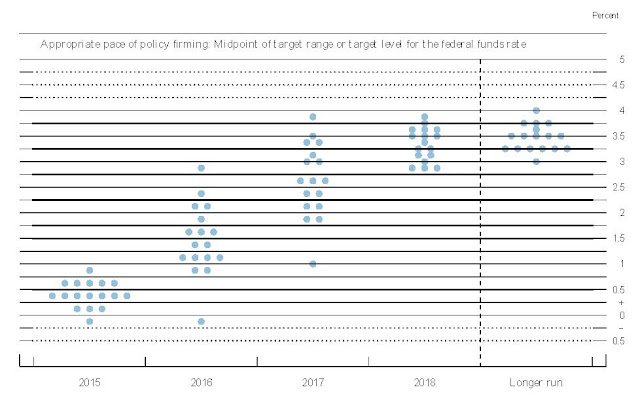 This shows how liberally the projection exercise can be interpreted by the participants. Note the outlier - one participant thought it would be optimal to have a negative policy rate, at least until the end of 2016. As Janet Yellen pointed out in Congressional testimony in February, she is not entirely clear that negative interest rates on reserves are even feasible in the United States, given both the legalities and our institutional structure. So, if one were to say, in September 2015, that negative interest rates would be optimal in December of 2015, and in December of 2016, it's not clear what that means, as the feasibility of such a policy still appears unsettled.

Some people are worried that the dot plots might be interpreted as commitments. If they were interpreted this way, that would be bad. The September 2015 dot plot above, interpreted as a commitment, says the FOMC was committing in September 2015 to roughly five quarter-point rate hikes by the end of 2016. If so, we would say they were failing. But that's not the right interpretation. What we should be doing is asking what has happened since September 2016 to change FOMC participants' views, how those views have changed, and whether that makes any sense. And the dot plots help you make that assessment, though maybe they don't tell you everything you want to know.

The Bloomberg editorial suggests the dot plots should go:

...it would help more to stop releasing information that begs to be misunderstood as a commitment to a specific path for interest rates, when the Fed is making no such commitment.

By this logic, I think, saying anything at all means you are "begging to be misunderstood." By now, I think the dot plots have helped people understand what the FOMC's policy statements mean. For example, the information in fed funds futures has typically predicted a lower policy rate trajectory for some time than what is in the dot plots - and typically the market has been right.

Narayana has some other suggestions about forecasts. From the Bloomberg editorial:

...Narayana Kocherlakota offered two other suggestions. First, delay publication of the dot plot to coincide with release of the Fed minutes: That way, it would be seen in the context of the Fed's internal debate on policy, rather than as part of its collective judgment on interest rates. Second, release a collective medium-term forecast of output and employment, modeled on the Bank of England's so-called fan charts.

The first suggestion would seem to make us worse off. This delays useful information, which is costly, and there is not much benefit to be had. The information in the minutes is only an outline of the FOMC discussion, and there is little to connect with information in the dot plots - hard to connect the dots, basically, even given the minutes. Second, a "collective medium-term forecast..." by all FOMC participants is not feasible, given the decentralized structure of the Federal Reserve System. So much for that.
Posted by Stephen Williamson at 3:43 PM