In October 2015, after a September payroll employment estimate of 142,000 new jobs, described as "grim" and "dismal" in the media, I wrote this blog post, arguing that we might well see less employment growth in the future. That conclusion came from simple labor force arithmetic. With the working-age population (ages 15-64) growing at a low rate of about 0.5%, if the labor force participation rate failed to increase and the unemployment rate stopped falling, payroll employment could grow at most by 60,000 per month, as I saw it last October.

After the last employment report, which included an estimate of a monthly increase of 38,000 in payroll employment, some people were "shocked," apparently. Let's take a look at a wider array of labor market data, and see whether they should be panicking. 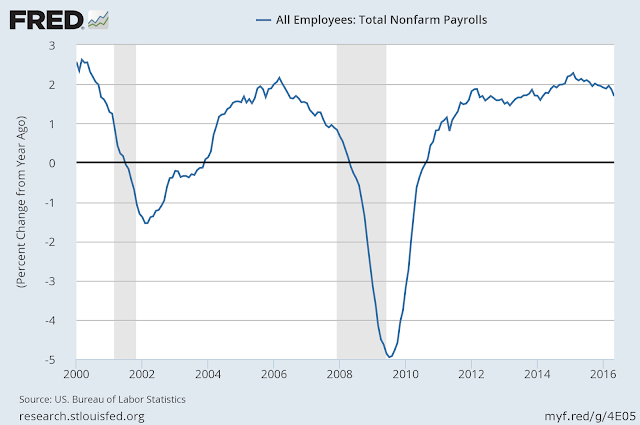 That wouldn't quite make your cat climb the curtains. Employment growth rates were above 2% for a short time in early 2015, and the growth rate has fallen, but we're back to growth rates close to what we saw in 2013-2014.

What's happening with unemployment and vacancies? 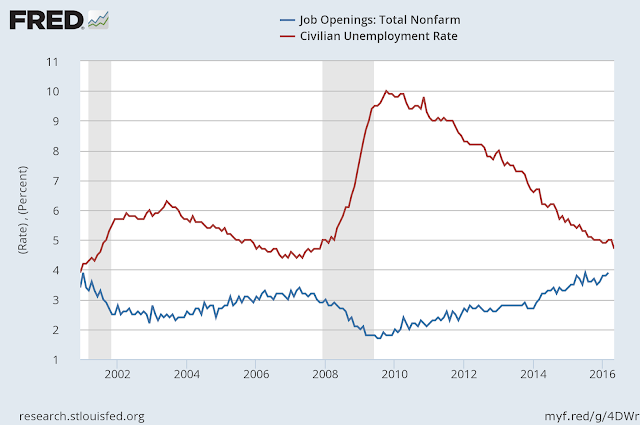 The unemployment rate is currently at 4.7%, only 0.3 percentage points higher than its most recent cyclical low of 4.4% in May 2007, and the vacancy rate (JOLTS job openings rate) has been no higher since JOLTS came into being more than 15 years ago. Thus, by the standard measure we would use in labor search models (ratio of vacancies to unemployment), this job market is very tight.

If we break down the unemployment rate by duration of unemployment, we get more information: 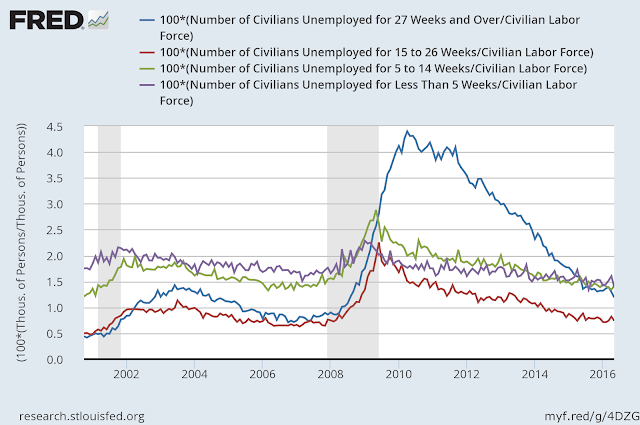 In this chart, I've taken the number of unemployed for a particular duration, and expressed this as percentage of the labor force. If you add the four quantities, you get the total unemployment rate. Here, it's useful again to compare the May 2016 numbers with May 2007. In May 2007, the unemployment rates for less than 5 weeks, 5 to 14 weeks, 15-26 weeks, and 27 weeks and over were 1.6%, 1.4%, 0.7%, and 0.7%, respectively. In May 2016 they were 1.4%, 1.4%, 0.7%, and 1.2%, respectively. So, middle-duration unemployment currently looks the same as in May 2007, but there are fewer very-short-term unemployed, and more long-term unemployed. But long-term unemployment continues to fall, with a significant decline in the last report.

Some people have looked at the low employment/population ratio and falling participation rate, and argued that this reflects a persistent inefficiency: 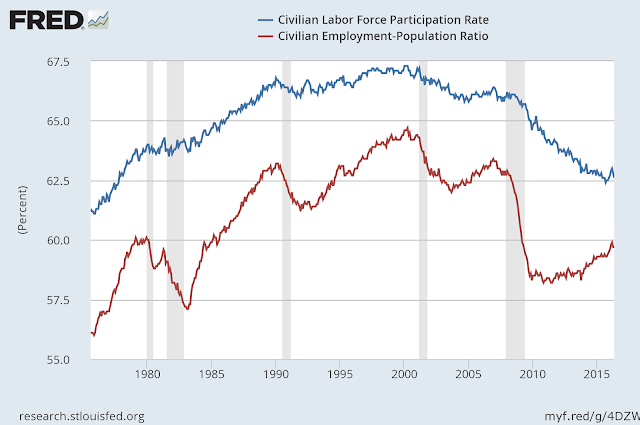 Another key piece of labor market information comes from the CPS measures of flows among the three labor force states - employed (E), unemployed (U), and not in the labor force (N). We'll plot these as percentage rates, relative to the stock of people in the source state. For the E state: 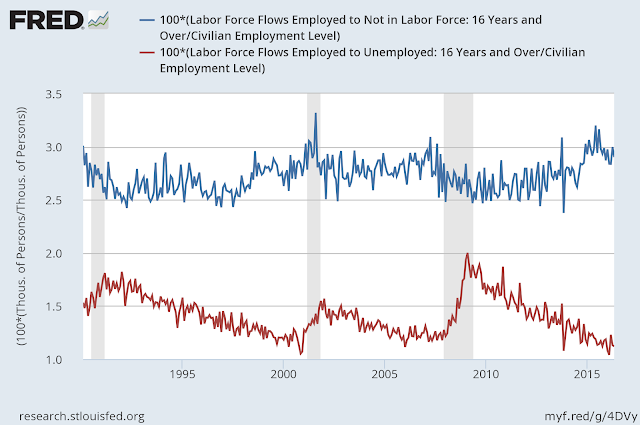 The rate of transition from E to U is at close to its lowest value since 1990, but the transition rate from E to N is relatively high. This is consistent with the view that the decline in labor force participation is a long-run phenomenon. People are not leaving E, suffering a period of U, and then going to N - they're going directly from E to N. Next, the U state: 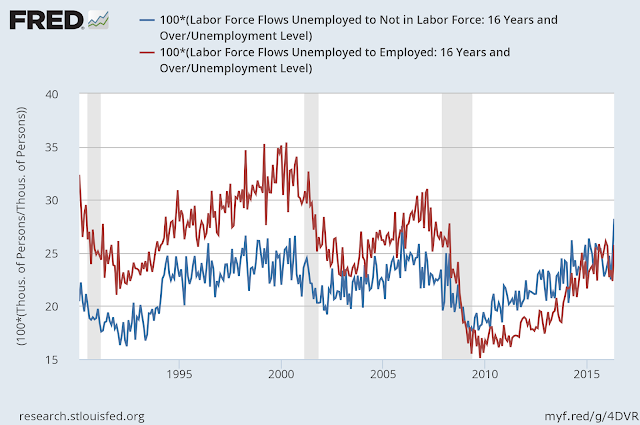 In this chart, the total rate at which people are exiting the U state is lower than average and, while before the last recession the exit rate to E was higher than the exit rate to N, these rates are currently about the same. This seems consistent with the fact that the unemployment pool currently has a mix that tilts more toward long-term unemployed. These people have a higher probability than the rest of the unemployed, of going to state N rather than E. Finally, for state N: 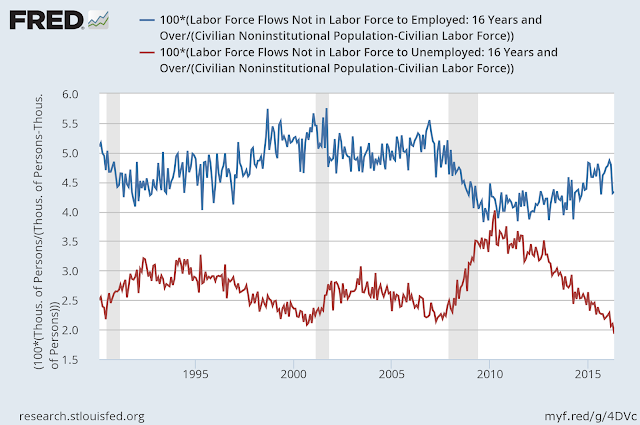 Here, the rates at which people are leaving state N for both states E and U are relatively low. Thus, labor force participation has declined both because of a high inflow (from both E and U) and a low outflow. But, the low outflow rate to U from N (in fact, the lowest since 1990) also reflects the tight labor market, in that a person leaving state N is much more likely to end up in state E rather than U (though no more likely, apparently, than was the case historically, on average).

The last thing we should look at is productivity. In this context, a useful measure is the ratio of real GDP to payroll employment, which looks like this: 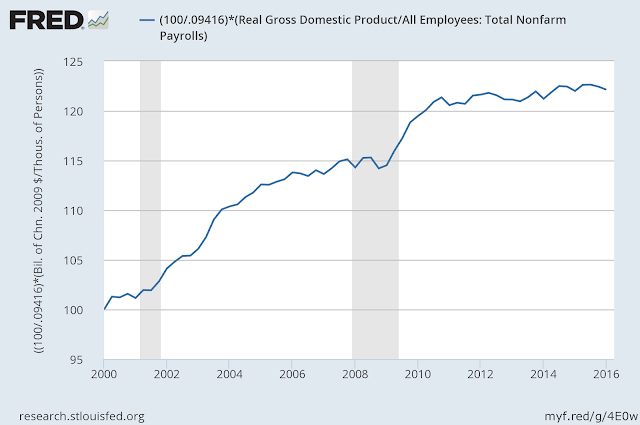 1. The recent month's slowdown in payroll employment growth should not be taken as a sign of an upcoming recession. The labor market, by conventional measures, is very tight.
2. The best forecast seems to be that, barring some unanticipated aggregate shock, labor force participation will stay where it is for the next year, while the unemployment rate could move lower, to the 4.2%-4.5% range, given that the fraction of long-term unemployed in the unemployment pool is still relatively high.
3. Given an annual growth rate of about 0.5% in the working age population, and supposing a drop of 0.2-0.5 percentage points in the unemployment rate over the next year, with half the reduction in unemployment involving transitions to employment, payroll employment can only grow at about 80,000 per month over the next year, assuming a stable labor force participation rate. Thus, if we add the striking Verizon workers (about 35,000) to the current increase in payroll employment, that's about what we'll be seeing for the next year. Don't be shocked and concerned. It is what it is.
4. Given recent productivity growth, and the prospects for employment growth, output growth is going to be low. I'll say 1.0%-2.0%. And that's if nothing extraordinary happens.
5. Though we can expect poor performance - low output and employment growth - relative to post-WWII time series for the United States, there is nothing currently in sight that represents an inefficiency that monetary policy could correct. That is, we should expect the labor market to remain tight, by conventional measures.
Posted by Stephen Williamson at 3:53 AM