We have important monetary policy issues to think about, but Krugman's NYT column this morning was too much to resist, as it feeds directly into what I was addressing in my last post.

Krugman wants to draw lessons from 1938 and World War II for current fiscal policy in the United States. This encapsulates his argument:

But it’s both instructive and discouraging to look at the state of America circa 1938 — instructive because the nature of the recovery that followed refutes the arguments dominating today’s public debate, discouraging because it’s hard to see anything like the miracle of the 1940s happening again.

He thinks he has it nailed. Note the reference to the "miracle of the 1940s." I'll take that literally, as referring to the whole decade, and that seems to be part of the argument. Apparently we're to think of World War II as some kind of miracle.

The 1938 recession is a key part of the Great Depression experience. It has long been part of our macroeconomic policy narrative, and has been used before in support of Keynesian-style responses to the financial crisis, in particular by Christina Romer. The FDR administration took the budget deficit from 5.5% of GDP in 1936 to a state (roughly) of budget balance in 1938. A Keynesian interpretation of that is that the contraction in fiscal policy helped cause the 1938 recession. Milton Friedman and Anna Schwartz, in their Monetary History of the United States argued that monetary policy was important - principally the doubling in reserve requirements from 1936 to 1937. Hal Cole and Lee Ohanian argue here that you can explain a lot of the features of the latter Great Depression years as coming from FDR's labor market policies. This is far from an open and shut case. I think you could convince me that the state of the government deficit at the time had little to do with the 1938 recession.

Now, the most egregious part of Krugman's argument is the following. Here, he is talking about World War II:

Deficit spending created an economic boom — and the boom laid the foundation for long-run prosperity.

Now, let's have a look at the time series, which I show in the chart. 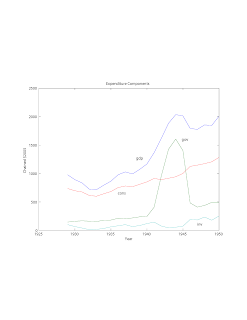 What I show here are real GDP, consumption (cons), investment (inv) and total government spending (gov) for 1929-1950.* What you see is a massive increase in government spending coupled with a large increase in GDP. What happens to the private sector? Note the dips in private consumption expenditure and investment expenditure during World War II. Where are the multipliers and accelerators? If this were a Keynesian phenomenon we would see the free lunch here. Private sector spending should have gone up. Of course, we know what was going on. This was a war, damn it. The US government implemented a massive shift in domestic production. Young men went off to Europe and the Pacific to become hamburger, women went to work, and everyone worked long hours. The labor force was not building houses and highways, and people were not buying Cadillacs. The resource reallocation was in part accomplished through non-market mechanisms. There were price controls and rationing. No one I ever talked to thought of World War II as good times. I think a lot of them would have been happy to trade 1943 for 1933. A key lesson here is that the level of employment, or the unemployment rate, may be a very bad measure of economic welfare.

Now, the incredible thing is that, after World War II, the US economy picked itself up and went on its way. In spite of the reallocation of resources for the war effort, production reoriented itself to private uses. Krugman seems to want to tell us that the government spending in World War II somehow put us back on the right track. To me this just looks like evidence in favor of the view that the private economy, left on its own, is remarkably resilient. Obviously the GI Bill - a government intervention - helped in the transition from a wartime to a peacetime economy, but it is nuts to say that World War II "laid the foundation for long-run prosperity."

Krugman sees the economy as an uruly child. You have to shut her in her room and tell her what to do, or she will mess up badly. From my point of view, what the child needs is a framework of rules, and I know that there are some things I will have to do for her. I need to defend her against powerful bullies, and I need to write some checks to provide for her education and keep her healthy. But part of my job is to cut her loose and get out of the way. If I keep her locked in her room, she might get her homework done today, but she won't prosper in the long run. And I'll be writing checks forever.

*Note that the components of GDP do not add up in the picture, i.e. it looks like GDP is smaller than the sum of consumption, investment, and government spending. Given the chain-weighting procedure used to calculate the components of real GDP, the real GDP components never, in fact, add up. This problem shows up with a vengeance in this instance.
Posted by Stephen Williamson at 10:43 AM