Bernanke's speech at the Boston Fed today provides a useful summary of current attitudes on the FOMC, and essentially encompasses what was in the last published FOMC minutes. The interesting parts have to do with Bernanke's views on the forces propelling inflation, the current policy choices facing the FOMC, and the tools that are available to the Fed currently.

With regard to the inflation objective of the Fed, Bernanke is quite specific:

The longer-run inflation projections in the SEP indicate that FOMC participants generally judge the mandate-consistent inflation rate to be about 2 percent or a bit below.

Several rationales can be provided for this judgment, including upward biases in the measurement of inflation. A rationale that is particularly relevant today is that maintaining an "inflation buffer" (that is, an average inflation rate greater than zero) allows for a somewhat higher average level of nominal interest rates, which in turn gives the Federal Reserve greater latitude to reduce the target federal funds rate when needed to stimulate increased economic activity and employment. A modestly positive inflation rate also reduces the probability that the economy could fall into deflation, which under some circumstances can lead to significant economic problems.

The upward-bias argument has to do with the well-known upward bias in CPI measures of inflation. The inflation buffer idea seems to go as follows. Inflation is costly, and variability in inflation is also costly, as it creates uncertainty. The way the Fed controls inflation is by moving the fed funds target around in the short run - up if inflation is too high, down if inflation is too low. If the average inflation rate is low, then the Fed will find itself frequently at the zero lower bound on the nominal interest rate and unable to increase inflation when it is too low. Thus, inflation is on average low, but too variable. By having a higher average inflation rate, inflation can be less variable. Of course, the Fed appears to be currently on the verge of attempting to increase the rate of inflation through other means than lowering short-term nominal interest rates, which are currently essentially at the zero lower bound. Indeed, later in his speech, Bernanke indicates that he has some confidence that the Fed can pull this off. What's the problem with the zero lower bound then? The last argument Bernanke makes for a 2% inflation rate is that this is sufficiently far from zero that we won't fall into a deflation. This reflects the view that deflation is somehow an absorbing state, and a bad one at that. However, deflation need not be absorbing, and much theory tells us it is actually a good state to be in. We actually do not have a theory that tells us why deflation is bad. Basically, Bernanke cannot really tell us why the inflation rate should not be -1%, 0%, 4%, or even 10%, rather than 2%, and neither can I. Of course, it is hard to argue with the idea that a predictable rate of inflation is a good idea, and 2% inflation certainly seems at least as good as anything else.

Now, as to what the Fed should be doing currently, Bernanke makes it clear that he thinks the Fed is achieving neither of the goals in its dual mandate. From his point of view the unemployment rate is too high, and the inflation rate is too low. Thus, if we have a Phillips-curve view of the world (which tends to promote agreement among inflation hawks and inflation doves) there is no conflict. Monetary policy should somehow be less restrictive. But how? Bernanke talks about two approaches: (i) purchases of long-maturity assets; (ii) statements about future policy actions that will alter inflationary expectations. In the first case, sometimes referred to as QEII (quantitative easing, second part), note that Bernanke is not clear about whether these purchases might be long-term Treasury securities or mortgage-backed securities. I'm not sure if this is an important policy statement, but it certainly seems at variance with most public statements by Fed officials I have seen, which make it clear that QEII, if it happens, will be purchases of Treasury securities.

What are the problems here?

1. Bernanke seems to think that all of the inflation risk is on the downside. I'm not sure that this is correct. While essentially all measures of inflation give a current inflation rate in the neighborhood of 1%, year-over-year, there are some signs that we could be due for more inflation, even if the Fed does not change its stated policy. First, the producer price index has been growing at a year-over-year rate of from 5.5% to 9.0% since January 2010. Second, consider the recent behavior of two monetary quantities, the currency component of M1, and total M1 (you'll see similar patterns in other aggregates) in the first two charts. 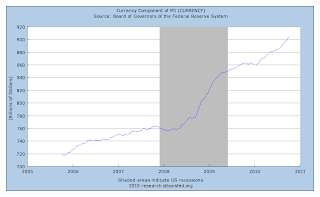 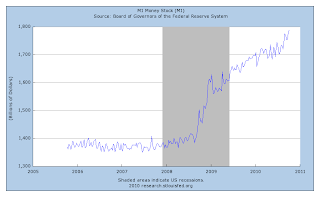 The rate of growth in currency has picked up significantly recently, and you can see a recent increase in the growth rate of M1 (these are weekly numbers). You can see a similar pattern if you look at M2. Thus, if you are an Old Monetarist or a New Monetarist, you might be expecting more inflation. Further, if we look at the difference between yields on 10-year nominal Treasury bonds, and 10-year TIPS (the "break-even" inflation rate implied by Treasury bond yields) in the next chart, note the recent history in the monthly data. 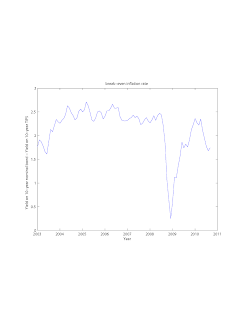 Now, in the last few days, the break-even rate has increased significantly, to 2.13% (the last time I checked today). While this recent increase is likely due to what the FOMC is expected to do at its next meeting, this perhaps indicates a need for caution.

Bernanke discusses some of the risks associated with QEII: the Fed has no experience with such a policy, and it is potentially risky for the Fed to mismatch maturities on either side of its balance sheet. Bernanke dismisses these concerns with this:

To address such concerns and to ensure that it can withdraw monetary accommodation smoothly at the appropriate time, the Federal Reserve has developed an array of new tools.7 With these tools in hand, I am confident that the FOMC will be able to tighten monetary conditions when warranted, even if the balance sheet remains considerably larger than normal at that time.

These "tools" are term deposits and reverse repurchase agreements, which the Fed appears to view as "reserve-draining tools," which it can somehow use to forestall inflation without raising short-term nominal interest rates. I think this notion is wrong. Whether reserves are held overnight or as term deposits, the Fed has to provide sufficient inducement (i.e. a high enough interest rate) for banks to hold a given quantity of reserves. If the Fed wants banks to hold more reserves, it will have to raise the interest rate on reserves. There is no getting around that. If the Fed wants to do reverse repurchase agreements, it might as well be selling assets. These "new tools" are not new in any sense. They are just other names for things that the Fed is already quite capable of doing.

Finally, Bernanke seems to be quite concerned with clear communication between the Fed and the public. Two good ways to start would be: (i) Drop the discussion of funny new tools like term deposits and reverse repos; (ii) Let us know what the Fed intends to do with the $1 trillion plus in mortgage-backed securities on its balance sheet. If we are in a phase where quantitative easing in some form is going to be on the table, we have to have some idea of what the Fed intends to do with the quantities on its balance sheet, under particular contingencies.
Posted by Stephen Williamson at 1:17 PM