The New York Fed released its plan for the second month of QE2 purchases, and this is available here. Essentially, this is identical to the first month, with a $75 billion net addition to the Fed's Treasury security holdings over the next month being the target, and an allowance of $30 billion in gross purchases for agency securities and mortgage-backed securities that are predicted to run off within the month. You can see some of the effect on the Fed balance sheet of QE2 operations up until now, in the first chart. 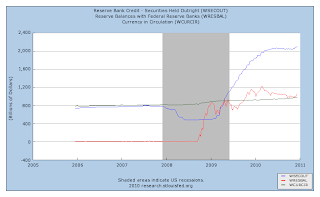 In the reported numbers, there was an increase of about $54 billion in securities held outright (blue) by the Fed from the week of November 17 to the week of December 8, a $67 billion increase in reserves (red), and a $3 billion increase in currency in circulation (green). There is a lot of slippage in these numbers due to other entries on the Fed's balance sheet and lack of seasonal adjustment, but until now (roughly) most of the new Treasury purchases showed up on the liabilities side of the Fed's balance sheet as an increase in reserves.

It will be useful to track some monetary quantities as QE2 progresses. With that in mind, the second chart shows the percentage change, year-over-year, in the currency component of M1 and in total M1 (at a weekly frequency). 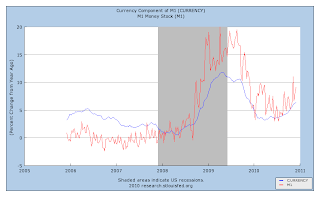 Note that currency is currently about 6% higher than a year ago, and M1 is about 9% higher. Percentage growth rates in both quantities have been increasing since late spring of 2010. Certainly the necessary conditions are there for QE2 to produce more inflation. When and if the inflation actually happens is another question.
Posted by Stephen Williamson at 11:32 AM