The QE2 asset purchases by the Fed began in early November. The plan was to increase the Fed's holdings of long-term Treasury securities by about $75 billion per month until the end of the second quarter of 2011. In the chart, the blue line is securities held outright by the Fed, which has been increasing at a steady rate, as planned. 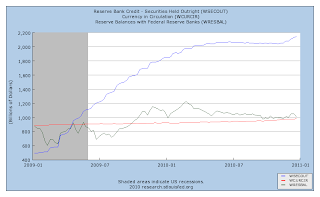 Of course, the Fed has to issue liabilities - outside money - to finance these purchases. However, reserves (the green line), and currency (the red line) show little increase since the beginning of the program. What's going on?

Of course, the Fed's balance sheet balances, so the increase in security holdings has to be reflected in an increase in liabilities other than outside money, or in a reduction in assets other than securities held outright. In the next chart, we can see who the culprit is. 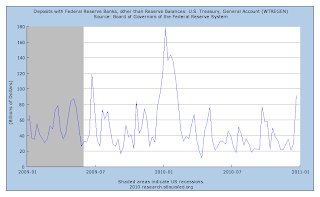 The big question here is why the Fed does not offset, on a daily basis, net withdrawals or deposits from the Treasury's account with the Fed. Fed officials seem to think that QE2 works through action on both sides of the Fed balance sheet. If QE2 has any consequences, it seems the Fed should want to minimize financial market disruption by smoothing the path of outside money. Why isn't that happening?
Posted by Stephen Williamson at 1:45 PM