Here is an issue that is currently floating around the blogosphere. If we look at post-World War II aggregate data, a standard business cycle regularity is that deviations of average labor productivity from trend are procyclical. For example, suppose we focus only on the period from late 1950s to the late 1980s, and use the ratio of real GDP to employment (household survey) as a crude measure of aggregate labor productivity. In the first chart, we see that average labor productivity is typically lower at the end of NBER recessions than at the beginning. 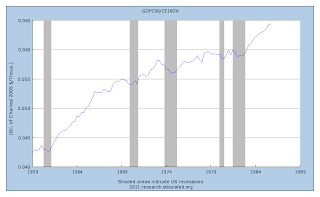 Now, in terms of the macro models that people were working with in 1990, this regularity might be seen as being consistent with the predictions of real business cycle (RBC) models, and inconsistent with Keynesian models. Indeed, unless total factor productivity (TFP) is falling in a recession, average labor productivity has to increase. One response to this is (was?) that labor hoarding is an important phenomenon. In a recession, if a particular firm has previously invested a lot in the firm-specific human capital of its work force, it will be reluctant to lay off those workers. In the interest of the long-run profitability of the firm, the firm might choose to keep workers on its payroll and not ask them to do much, rather than lay those workers off and potentially lose them forever. With labor hoarding, actual labor input can fall without measured labor input falling. Indeed, if we measure TFP using the Solow residual, we may observe the Solow residual falling when actual TFP is not falling. I'm not sure how these issues sorted themselves out in the literature (if at all), but certainly Keynesians and non-Keynesians were writing about it. 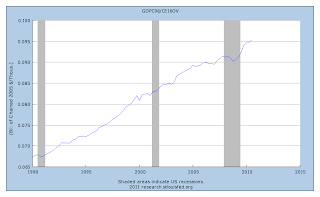 What is going on here? In the blogosphere, Brad DeLong shows us some plots of unemployment and productivity that tell essentially the same story, and Krugman offers up some explanations. Some other people are talking about "zero marginal productivity" workers, and that makes little sense to me.

Let's try to understand this. Here are some possibilities:

1. As one blogger pointed out, the productivity of workers on the job could have risen, as these workers might increase effort on the job in response to the fact that unemployment is now potentially a worse state (expected duration of unemployment has increased), i.e. the cost of separation for a worker is higher. This is the kind of mechanism at work in an efficiency wage model. I'm going to dismiss this, as I don't think it's quantitatively important, but I'm willing to be convinced if someone has evidence to offer.

2. Krugman mentions unionization (and makes a reference to Nick Rowe's stuff), which may have something going for it as an explanation. The degree of unionization in the US has certainly fallen in the post-1990 period relative to the pre-1990 period. However, maybe the effect goes the wrong way. Likely the key effect of unions on how a firm adjusts total hours of work is that a union puts more constraints on how time is used at work, and on the specific tasks a worker can be assigned to. In principle, it seems that if you put constraints on how the firm can adjust the intensive margins of its work force, the firm will adjust more on the extensive margin, and you might then expect a unionized firm to have more variance in employment over the cycle, not less.

3. What could be going on is Schumpeterian creative destruction. Within an industry, the low-productivity firms fail during a recession, raising average productivity in the industry. But what makes the post-1990 period, and particularly this recession, different then? Maybe the financial factors driving the recession give the Schumpeterian mechanism more kick.

Looks like this is a problem that isn't going to be solved in a blog piece, unless someone can shed some light on this for us. In any case, uncovering what is causing the recent productivity increase is very important. For example, if this is Schumpeterian creative destruction at work, then that is cause for optimism, as that would tell us that the increase in aggregate productivity is permanent, and this sets the stage for future growth in GDP and employment. However, if the recent productivity increase reflects only a temporary change in the sectoral composition of output, the effect is only temporary, and we should be less optimistic.
Posted by Stephen Williamson at 1:22 PM