A few negative pieces of information seem to have put the usual people in a funk. DeLong is panicing, Krugman invokes the D-word, and David Leonhardt wants something done NOW. Mark Thoma is more restrained, but wants us to "fix" the deficient demand problem he perceives.

Thoma shows us some pictures from one of Lucas's talks, one of which shows the US real per-capita GDP time series going back to 1870. The key feature of the time series, as most people know, and as I point out to my undergraduate students, is that it hews very closely to a 2% growth trend, excluding the Great Depression and World War II. What we find compelling about this is that it conforms roughly to the behavior of a standard neoclassical growth model subject to a constant rate of growth in total factor productivity (TFP). Of course, while the neoclassical growth model tells us a nice simple story about trend growth, it does not have much to say about the Great Depression, what was going on in World War II, or what causes fluctuations about trend. As we know, those issues get us into various kinds of stochastic shocks, frictions, heterogeneity among economic agents, etc., that we add to the basic framework.

Fundamentally, though, most macroeconomists seem to agree on what the basic driving forces are behind economic growth and the models that are useful for understanding trend growth. This I think is the source of Mark Thoma's faith that we will ultimately return to the 2% per-capita real GDP trend growth path that we embarked on in 1870 (or earlier). Most of us cannot see any good reason why historically-observed TFP growth should not continue indefinitely in the US at a rate that produces historically-observed per-capita trend GDP growth.

But how have we been doing recently relative to trend? The first chart shows the natural log of post-1947 aggregate real GDP (not per-capita) with a fitted linear trend, which implies average growth of 3.3%. 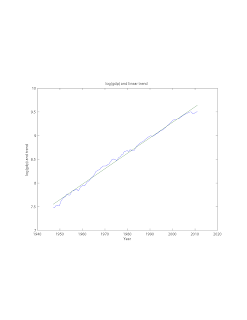 The next chart shows the percentage deviations of real GDP from the trend. 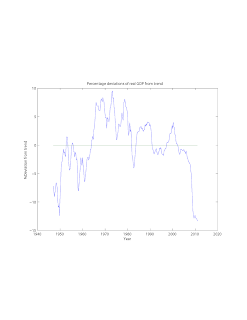 The interesting thing about this chart is the recent history. Note that the largest recent positive devation from trend was 3.43% in 2000, and that the growth rate in real GDP has (roughly) been below the post-1947 average of 3.26% since. The current deviation from trend is an enormous -13.4%, which is unprecedented in the 64-year sample.

Thus, in this sense things definitely look bad. Given the slow recovery from the recent recession, we are continuing to lose ground relative to the post-1947 trend. Can we say that the post-1947 trend is "potential GDP," and that we currently have a 13.4% output gap? Of course not. Without understanding the mechanism driving the recession, we cannot say what economic inefficiencies might be at work here or what fiscal and monetary policy should be doing about this, if anything. David Leonhardt has the answers though. In fact, he read about it in a textbook:

Any temporary measures will eventually need to lapse, of course. But the current moment remains a textbook time to use them — when the economy is struggling to emerge from the aftermath of a terrible recession.

I'm not sure what textbook David has in mind. Presumably this book has a description of a quantitative model of the macreconomy that includes some financial frictions and allows us to think about how the incentive problems in the mortgate market and, more broadly, in the financial intermediation sector, acted to bring on the recent downturn. Such a model must also tell us how quantitative easing works to boost output, as Leonhardt seems convinced that Ben Bernanke is reading the same book:

The Fed could stop worrying so much about inflation, which remains historically low, and look at how else it might encourage spending. As Mr. Bernanke has said before, the Fed “retains considerable power” to lift growth.

Now, I'm not sure whether this is encouraging or not, but the next chart shows the path of real GDP from the most recent NBER-dated business cycle peak, relative to the previous two recessions. 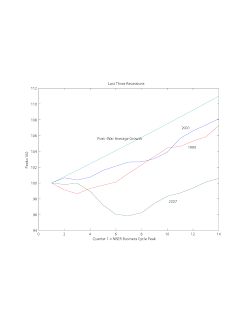 What is interesting here is that, given the depth of the recent recession, the negative deviation from a 3.26% growth trend (from the NBER-dated business cycle peak) appears no more persistent than in the recent two recessions. Thus, whatever phenomenon is driving the slow recovery may not be new, and may have nothing to do with the particulars of the financial crisis.

In any event, what I do not like in any of the blog/mainstream news posts I have linked to above is the notion that we know exactly what is going on, and exactly what we should be doing about it. There are good reasons to question Keynesian orthodoxy in the current context. Even if we thought that sticky wages and prices were important factors in the recent recession (which I do not), it is hard to believe that the effects of this stickiness would matter 14 quarters after the onset of the recession. Those pushing the Keynesian narrative need to provide us with some more explicit evidence about wage and price stickiness as it relates to recent events.

Further, though Keynesians may wish for more stimulus, they are not going to get it. It cannot come from the Fed, for reasons I have discussed before, and the federal government seems incapable of deciding how big it wants to be, let alone whether it wants to engage in Keynesian fine-tuning.
Posted by Stephen Williamson at 2:14 PM