Is Government the Answer, or the Question?

In honour of Canada's 144th birthday, which I'm sure you are celebrating tomorrow, today we'll look at some Canadian data. I'm not just drawing attention to Canadians to make them feel good. Indeed, some Canadians are so shy that they would rather be ignored. I'm thinking this exercise might actually shed some light on some recent issues. My title is inspired by a prolific Canadian who is endowed with a surplus of integrity, Neil Young, who once wrote (and sang): "love's the answer, love's the question." Sounds very sixties, and it seems somehow profound, but I can't tell you why.

In this previous post, I looked at some trends in US GDP, which basically replicated part of what Lucas was discussing in these slides. Basically, if you look at departures of US real GDP from a linear trend, the current observation is substantially below trend. Indeed, the data we have seen is consistent with either of two views. In one view there was a level adjustment in US real GDP that put us on a lower growth path. In the other view we will return to the trend growth path we were on previously.

Now, the standard Keynesian narrative we hear - and it's hard not to hear it as these people are blasting it at us every hour of the day - is that aggregate demand is too low, i.e. deficient, and the government is the answer. The US federal government can, and should, purchase more goods and services and/or cut taxes, and this will return us to trend. Lucas's slides suggest another explanation. He considers the possibility that there has been a level adjustment in the real GDP growth path, so that we are now on a trajectory that looks more like that of Western Europe than the US in days of yore. Why would this happen? Lucas argues that we may now have too much government rather than too little; various incursions or expected incursions of the federal government have essentially made us less productive, or potentially less productive in the future.

What do we make of this? Well, rather than comparing ourselves with Western Europe, let's go the back yard, as it were, and see what the Canadians (our socialists to the north) have been up to. The first chart shows what has happened to real GDP in Canada and the US since the beginning of the last recession. 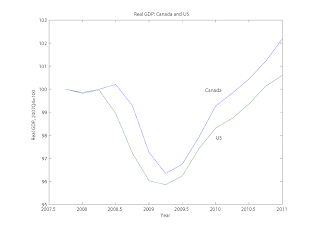 The recession in Canada was clearly shorter, and not quite as severe, and Canada is now doing somewhat better than the US, relative to where it was at the beginning of the recession. This is to be expected since, as everyone knows, Canada went through the financial crisis with no significant problems in the banking sector, there was no collapse in housing prices, and residential construction bounced back in the recovery. Still, the Canadian experience is not that different.

Further, the next chart shows a longer time series for the log of real GDP in Canada, with a linear time trend. 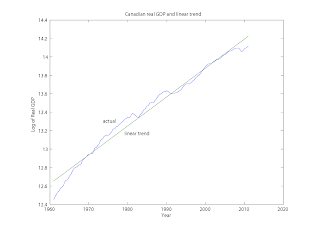 Over this period, the average rate of growth is essentially identical to what it was in the US, roughly 3.1% per year. What is striking is the next chart, which plots the deviations of the log of real GDP from a linear trend for both the US and Canada. 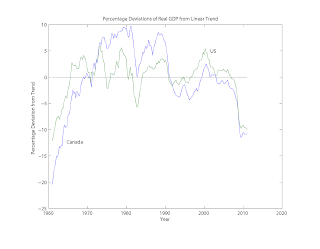 The US and Canada are currently in about the same place, i.e. about 10% below trend; indeed the US is doing a little better. This certainly is not consistent with what Lucas is suggesting. If more government intervention, or the threat of it, caused a negative level adjustment to the real GDP growth path, then there should be a negative level adjustment relative to the Canadians who, if anything, are moving in the direction of less intervention. 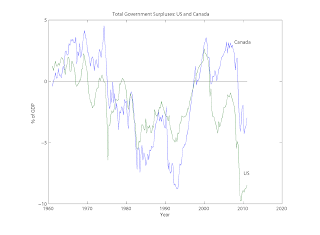 Now focus on the time series since 2000, when the US and Canada are in approximately the same fiscal position. The Bush tax cuts contribute to what looks like a drop of about 4% in the surplus in the US relative to GDP. Then, during the recent recession, there is a drop in peak-to-trough surpluses of about 7.3% of GDP in Canada, and about 8.9% of GDP in the US, presumably reflecting a bigger stimulus program in the US. So, whether you think that deficits work as Keynesian aggregate-demand-boosters or that tax cuts work to encourage labor supply, you have a lot of explaining to do. Why does 10% of GDP in stimulation in the US, and 4% in Canada, put both countries in the same place, at 10% below trend?

Now, finally, what is also very interesting is how the relative GDP paths in Canada and the US compare to relative labor market performance in the two countries. The next chart shows unemployment rates. 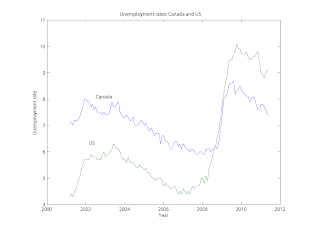 Thus, in spite of similar GDP performance in Canada and the US, behavior in the labor market is remarkably different. You can't reconcile these differences with some story about "aggregate demand deficiencies," which at the best of times is not helpful anyway, being another way to say "output is below trend." I did not calculate productivity numbers for the US and Canada, but the flip side of the labor market and GDP observations has to be reflected in different average labor productivity growth too.

My conclusion is that, to understand why the US recovery is weak, and what this means for the future, we should not be thinking about the government. In my mind, the answers will come from understanding the barriers to mobility in labor across sectors, sectoral productivity, and links between the labor market and financial factors. Government may or may not be the answer, but you have to know what the question is first.
Posted by Stephen Williamson at 12:33 PM