I ran across two pieces by well-known macroeconomists that support - wholeheartedly - the Fed's view of why it conducts quantitative easing (QE) exercises, and why QE is supposed to work. The first is by Miles Kimball, in a blog piece intended for a wide audience. The second is this paper by Roger Farmer, which is a quasi-formal approach to the question.

Kimball's narrative would make any Old Keynesian or New Keynesian comfortable. Here's what he says:

1. There is a Phillips curve: 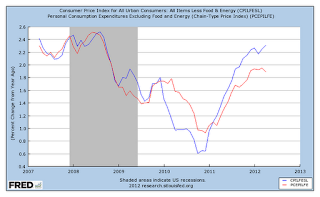 2. What should a central bank do?

WHEN BELOW NATURAL OUTPUT: PRINT MONEY AND BUY ASSETS!

According to Kimball, this prescription need not be modified given the current state of affairs. He says it does not matter if short-term nominal interest rates are zero, or close to it, because:

Whenever the Fed buys any asset, its price goes up.

Kimball makes this seem like a simple application of what we learned in Econ 101, but he thinks we might need a little Finance too:

One of the most useful facts in all of Finance comes into play. For assets, a higher price is basically the same thing as a lower interest rate.

Another useful piece of finance is the Modigliani Miller theorem. Kimball might want to explain to us why, if the Fed issues reserves (overnight liabilities), and buys some other assets, and private financial intermediaries are perfectly capable of issuing overnight liabilities and buying the same assets, that the Fed's QE is not undone.

3. Lowering interest rates increases aggregate demand, and there are no practical limits on the stimulative effects the Fed can have:

What if all the assets in the world got down to a zero nominal interest rate and the economy still didn’t have enough stimulus? Then, and only then, we would be in deep, deep trouble on the aggregate demand front from which there would be no escape through monetary policy. But we are far, far away from that situation. Simple economic models studied by economists often have this happen because they have so few types of assets in them, but the real world has a huge number of different types of assets, some with nominal interest rates that are still very far from zero.

What's wrong with that paragraph? What's right about it? A central bank is a financial intermediary. Its power to alter the allocation of resources and economic welfare derives from its monopoly over the issue of some special kinds of liabilities (currency and reserves) which are used in retail transactions and large-value financial transactions. As Kimball notes, all but a small quantity of the reserves currently outstanding are currently "asleep," i.e. they sit during the day and overnight, and are not so different from T-bills (except that more economic agents can hold T-bills than have reserve accounts). If the Fed issues reserves and buys long-term Treasury bonds under these conditions, that can have no effect, as that's a process of intermediating Treasury bonds that is no different from what can be done by a shadow bank. If the Fed issues reserves and buys mortgage-backed securities issued by Fannie Mae or Freddie Mac, that amounts to the same thing - no effect. However, if the Fed were to, for example, buy mortgages directly, that would be an entirely different game. How good is the Fed at screening mortgage borrowers? Is the Fed going to target particular segments of the mortgage market? Maybe Congress wants some say in how the Fed does that? Maybe some people will be lobbying Congress in a serious way to make sure that their segment of the credit market gets the intervention? Sounds like opening a can of worms, doesn't it?

So, Kimball needs to think harder about QE. What about Farmer? The empirical part of the paper we have mostly seen before. These are the kind of event-study-type pictures that are sometimes used to "prove" that QE works. Any self-respecting economist will take more convincing than that. A serious model and some solid structural work would be nice. The theory part of Farmer's paper is supposed to be model free. It's basic intertemporal asset pricing, and the idea is the following. Suppose there exists nominal government debt of different maturities. In Woodford fashion, we can think of monetary policy as a contingent rule for setting the one-period nominal interest rate. But what if our rule is not feasible, i.e. the one-period nominal interest rate can't be nonnegative in all states of the world, given the rule we would like to impose. Then, it must be optimal for the one-period nominal rate to be zero in some states, but we then need to choose the short nominal rates in the other states. Given term structure relationships, the thought experiment we conduct in determining the optimal policy rule effectively involves changing some long-term nominal rates. Apparently that's how Farmer thinks about QE. Problem: To say how QE works, we have to have the relevant asset swaps in the model. There are no asset quantities in siqht in the framework that Farmer lays out. That isn't much help.
Posted by Stephen Williamson at 12:17 PM