There is plenty of talk, coming from Fed officials and mainstream media (NYT and WSJ, for example) that the Fed is thinking about more QE, and will announce it, either after its meeting next week, or in September.

Rightly or wrongly, the Fed has made clear how it interprets the dual mandate from Congress. The first part of the mandate, "price stability," translates to 2% inflation. The second part, "maximum employment," means concern with the labor market more generally, and often particularly with the unemployment rate. How are we doing? On the first part of the mandate, we're south of the target, as you can see in the next chart. 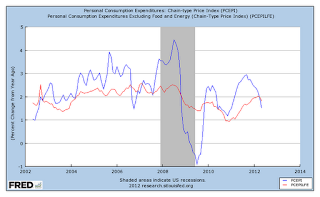 The chart shows the inflation rate, as measured by 12-month percentage increase in the pce deflator, and the core pce deflator. The Fed has made clear that its interest is in the raw pce inflation measure. In any case, both measures are below 2%, though not by much for the core measure. On the second part of the mandate, the recent surprises have been on the down side. Employment growth is lower than expected and the unemployment rate is not falling as expected. Nothing is settled in Europe, and fiscal policy in the United States is currently confused and confusing.

Any Taylor-rule central banker would be pushing for more monetary accommodation. But what does the Fed have available that can allow it to be more accommodating? Other than QE, here are some other possibilities:

1. Reduce the interest rate on reserves (IROR) to zero: The FOMC would announce this as a reduction in the fed funds rate target to 0%, instead of a target range of 0-0.25%, but the Board of Governors would actually have to reduce the IROR to make a difference, as it's the IROR that drives the fed funds rate under current conditions. But the Fed will not reduce the IROR to zero. Its concern is with money market mutual funds (MMMFs). With IROR at 0.25%, there seems to be enough of an interest rate differential that MMMFs can eek out a profit and retain their contracts which fix the value of a MMMF share at $1. The concern is that, if the IROR goes to zero, then there would be an exodus from MMMFs, as shareholders would fear that these MMMFs were about to "break the buck." MMMFs intermediate a lot of commercial paper, for example, so the resulting disintermediation would be "disruptive." I'm not sure that these concerns make any sense, but I'll write about that another time.

2. More forward guidance: Here's how this reads in the last FOMC statement, from June 20:

the Committee decided today to keep the target range for the federal funds rate at 0 to 1/4 percent and currently anticipates that economic conditions--including low rates of resource utilization and a subdued outlook for inflation over the medium run--are likely to warrant exceptionally low levels for the federal funds rate at least through late 2014.

Early forward guidance language (e.g. in 2009) was more vague, mentioning only an "extended period" of low interest rates. The extended period became an explicitly specified period, and that period was lengthened to extend to late 2014. The idea behind forward guidance is that expectations about future monetary policy are important for determining the current inflation rate, for example. So monetary policy can affect inflation and perhaps real activity without the Fed actually taking any current action. All it needs to do is make commitments about future policy. Thus, the Fed could in principle be more accommodative by changing the late 2014 date to something else - maybe late 2015. The problem here is that the Fed has made clear that the "late 2014" language is something it is willing to change at will. If future events made tightening look desirable before the end of 2014 arrived, the Fed would be willing to move the date up, apparently. As a result the forward guidance language no longer has any meaning. It's not a commitment, so it's irrelevant.

So that leaves us with QE. If you have been reading these posts, you know I think QE does not matter, under current conditions. But suppose you think it does. Why would the Fed think it needs to accommodate more? It already did so at the last meeting in June, when it extended "Operation Twist" to the end of the year. Implicitly, there seems to be a view that "Operation Twist" is a milder version of QE, maybe because it does not change the size of the Fed's balance sheet. But Operation Twist and QE are actually the same thing. What matters (if you buy into QE at all) is the composition of the outstanding debt of Fed and the Treasury, and Operation Twist and QE change that composition in essentially the same way. Operation twist is a swap of short-maturity government debt for long-maturity debt, and QE is a swap of reserves for long maturity government debt (or mortgage backed securities - more about that shortly). Is there any difference between short-term government debt and reserves currently? No, not much. So Operation Twist and QE are the same thing.

But maybe the Fed thinks it was too hasty and should do more? Maybe that's what John Williams is talking about when he says there should be an

Indeed, it's always puzzled me that the FOMC has not conducted its asset purchase programs in the way it formerly targeted the fed funds rate. Why not fix the path for purchases until the next FOMC meeting, and revisit the issue at each subsequent meeting?

Here's another puzzler. The article I link to above, on John Williams, says:

If the Fed launched another round of quantitative easing, Mr Williams suggested that buying mortgage-backed securities rather than Treasuries would have a stronger effect on financial conditions. “There’s a lot more you can buy without interfering with market function and you maybe get a little more bang for the buck,” he said.

There are two claims in the quote that are worthy of note:

On the first claim: I ran across a discussion of "disruption" in the minutes from the last FOMC meeting:

Some members noted the risk that continued purchases of longer-term Treasury securities could, at some point, lead to deterioration in the functioning of the Treasury securities market that could undermine the intended effects of the policy. However, members generally agreed that such risks seemed low at present, and were outweighed by the expected benefits of the action.

So what's that about? I'm not completely sure, but I think the issue is the following. People who trade in government securities seem to have a segmented view of the market for Treasuries. "On-the-run" government securities are newly-issued, and "off-the-run" are secondhand. Apparently the prices of on-the-run Treasuries tend to be higher than the prices of off-the-run Treasuries with the same duration. This difference in price is thought to be a liquidity premium, in that the market in on-the-run Treasuries is more liquid because it is thicker. To people who study market microstructure, this might make sense, but I think economists will have trouble explaining it. Why would we think of the market for Treasuries as segmented in this fashion? A secondhand Treasury is harder to price or trade than a new one? Why?

On the second claim above, that purchases of mortgage-backed securities (MBS) by the Fed should matter more than purchases of Treasuries, I don't see it. According to the theory the Fed seems to have in mind (to the extent it has anything on its collective mind at all) QE works because of market segmentation. You buy long-term assets and sell short-term ones, and this pushes up the price of the long-term assets, according to Ben Bernanke. But why should it make any difference whether the Fed purchases MBS or Treasuries? That would appear to be the same segment of the market. The MBS market is dominated by Freddie Mac and Fannie Mae, now government-owned enterprises. The MBS they issue are generic products, and one does not have to think much about what one is buying, just as one does not have to think much about what one is buying in the Treasury market. That's why the Fed is buying MBS and not corporate bonds. It doesn't require much thinking. More bang for the buck with MBS? I don't think so.

In my quest for actual research on why QE might matter, I ran across this paper by Mark Gertler and Peter Karadi. Here's something I like in the paper:

A popular view of LSAPs — known more broadly as "quantitative easing" — is that they reﬂect money creation. We instead argue that LSAPs should be seen as central bank intermediation. Just like private intermediaries the Fed has ﬁnanced its asset purchases with variable interest bearing liabilities and not money per se. The difference of course is that that Fed’s liabilities are effectively government debt.

The important idea here is that it is useful to think about QE as intermediation. That's the whole key to understanding why it does or does not matter. Though Gertler and Karadi want to make a distinction between QE and conventional monetary policy or "money creation," they should think of the latter as intermediation too. The key issue is that the intermediation the Fed does will only matter and be useful to the extent that the Fed can do it better than the private sector can.

Gertler and Karadi do their best to construct a model where that is the case. There are financial frictions that gum up the private sector's ability to do something like QE. When the Fed does QE, that can be beneficial because the Fed is better at this activity than is the private sector, in the Gertler-Karadi model. It's a bit of a chicken model, and I'm not convinced, but basically they have the right idea. If you want to explain why QE matters, you have to show why the Fed is better than the private sector at turning long-term safe debt into short-term safe debt.

Posted by Stephen Williamson at 11:48 AM