FOMC Behavior and the Dual Mandate

In the most recent FOMC statement, we are told the following:

Consistent with its statutory mandate, the Committee seeks to foster maximum employment and price stability. The Committee remains concerned that, without sufficient policy accommodation, economic growth might not be strong enough to generate sustained improvement in labor market conditions. Furthermore, strains in global financial markets continue to pose significant downside risks to the economic outlook. The Committee also anticipates that inflation over the medium term likely would run at or below its 2 percent objective.

The argument is that we need more accommodative policy because: (i) the FOMC expects that, without such policy, there would be insufficient improvement in the state of the labor market and (ii) inflation is expected to continue below the FOMC's target of 2%. Thus, the FOMC anticipates that it will be missing on both sides of its dual mandate in the immediate future unless it does something about it.

Does the FOMC have it right? I have no idea whether the Fed is confident in its forecasts, whether we would think those forecasts are any good if we knew how they were done, etc., so all I can do is look at actual data. With respect to the "price stability" part of the dual mandate, the Fed has decided that the rate of increase in the PCE deflator is the appropriate measure of inflation. The first chart shows the twelve-month percentage increase in the PCE deflator. 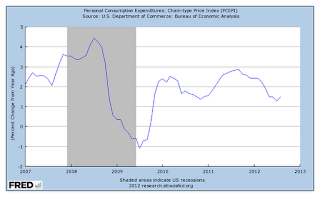 As you can see, by this measure inflation is well below the 2% target - it's about 1.5% currently. But it was also well above the target for much of 2011 and early 2012. At that time, for example in the June 2011 policy statement, the FOMC was inclined to discount what it was seeing:

Inflation has moved up recently, but the Committee anticipates that inflation will subside to levels at or below those consistent with the Committee's dual mandate as the effects of past energy and other commodity price increases dissipate.

When the FOMC highlights the volatile nature of inflation on the upside and fails to mention it on the downside, one can't help but be suspicious. Further, suppose that we look at the price data in another way, as in the next chart. 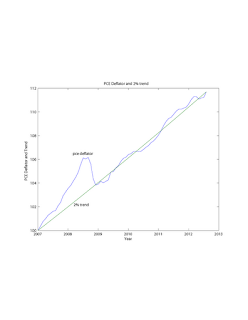 In this chart, I show the pce deflator, and a 2% trend, beginning in January 2007. If we were judging the Fed's performance according to a price level target, as in the chart, we would think it was doing phenomenally well. Since early 2009, the actual PCE deflator has not strayed far from its target path, and is currently right on target, particularly with the large increase in the last month.

What about the other part of the Fed's mandate? We can argue about what an economically efficient level of aggregate economic activity is currently in the United States and what influence the Fed can have over it. But what if we take a standard central-banker-New-or-Old-Keynesian approach - something like what I describe in this post? The Congressional Budget Office (CBO) thinks that the current "short-term natural rate of unemployment" is 6%. I have no idea what they think that means, or if it makes any sense at all, but we'll use that number. The actual rate of unemployment is 7.8%, so by the CBO's criterion, the Fed is missing on this side of the mandate.

New Keynesians like to think about monetary policy in terms of a Taylor rule, which specifies a target for the federal funds rate as a function of the "output gap" and the deviation of the actual inflation rate from its target value. According to standard Taylor rules, the fed funds target should go down when the output gap rises and up when the inflation rate rises. You can even fit Taylor rules to the data. I fit one to quarterly data for 1987-2007, and obtained the following:

where R is the fed funds rate, U is the unemployment rate, U* is the CBO natural rate of unemployment (so U-U* is my measure of the output gap) and P is the year-over-year percentage increase in the PCE deflator. You can see how it fits the historical data in the next chart. 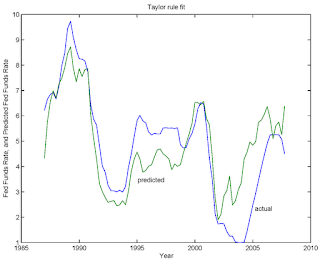 Thus, the FOMC may see itself as missing on both sides of its mandate, but if it had been missing in the same way in 1997, the fed funds rate target would be at 1.1%, and the Fed would certainly not have been considering large-scale asset purchase programs, let alone making promises to keep the fed funds rate at 0-0.25% for almost three years into the future.

So, the Fed's behavior seems to have changed. Maybe change is good. Who is to say that behavior from 1987-2007 was optimal? One argument for an extended period of low nominal interest rates comes from Eggertsson and Woodford, and I raise some doubts about that here. Even if you buy Eggertsson Woodford, their extended-period arguments are a matter of fulfilling a commitment, not getting some extra accommodative mileage currently. People who use the Eggertsson-Woodford argument are imagining the extended period to be well off in the future, not where we are now.

But one view of the Fed's behavior could be that it has simply lost its inflation resolve. If that view catches on, look out.
Posted by Stephen Williamson at 2:04 PM