A key piece of information that I missed in the minutes from the July 30-31 FOMC meeting, is this:

In support of the Committee's longer-run planning for improvements in the implementation of monetary policy, the Desk report also included a briefing on the potential for establishing a fixed-rate, full-allotment overnight reverse repurchase agreement facility as an additional tool for managing money market interest rates. The presentation suggested that such a facility would allow the Committee to offer an overnight, risk-free instrument directly to a relatively wide range of market participants, perhaps complementing the payment of interest on excess reserves held by banks and thereby improving the Committee's ability to keep short-term market rates at levels that it deems appropriate to achieve its macroeconomic objectives. The staff also identified several key issues that would require consideration in the design of such a facility, including the choice of the appropriate facility interest rate and possible additions to the range of eligible counterparties. In general, meeting participants indicated that they thought such a facility could prove helpful; they asked the staff to undertake further work to examine how it might operate and how it might affect short-term funding markets. A number of them emphasized that their interest in having the staff conduct additional research reflected an ongoing effort to improve the technical execution of policy and did not signal any change in the Committee's views about policy going forward.

So, what does that mean? If you check the state of the Fed's balance sheet, you'll see that the current size of the Fed's balance sheet is about $3.6 trillion. On the liabilities side, the Fed has reserve balances outstanding of about $2.2 trillion, and the Fed's assets include about $1.3 trillion in mortgage-backed securities and about $2 trillion in long-maturity Treasury notes and bonds. The Fed currently holds no Treasury bills. Thus, relative to pre-financial crisis times, the Fed has issued a very large stock of reserves in order to expand its asset portfolio. Further, that portfolio, which used to have a composition that looked roughly like the composition of the federal government debt outstanding, now is tilted heavily toward the long-maturity end of the spectrum, and includes assets which, though passed through public hands, are essentially private. For a very long time, the Fed is likely to have a balance sheet that is very large relative to what it has been historically, and it is not likely to be selling off assets or if it does sell assets, to sell them at a high rate.

Thus, the Fed is likely to be operating under a "floor system" for a long time. Under a floor system, there are excess reserves outstanding in financial markets each night, and the interest rate on reserves plays a key role in determining short-term interest rates. But, given the complications of the law governing payment of interest on reserves, GSEs (Fannie Mae and Freddie Mac) hold reserve accounts but cannot be paid interest on reserve balances by the Fed. Indeed, it seems that most of the current activity on the fed funds market consists of GSEs lending reserves overnight to financial institutions that receive interest on reserve balances. Arbitrage would seem to dictate that fed funds would trade at 0.25%, the interest rate on reserves (IROR), but that's not what happens, as you can see in the chart. There is something inhibiting arbitrage - the GSEs are poor bargainers, fed funds borrowing has implications for deposit insurance premia, for example. 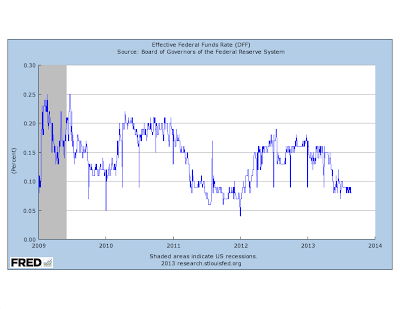 And it's not like the friction in the market is going away. Currently the margin between the IROR and the fed funds rate is about as large as at any time since the Fed started paying interest on reserves.

So, what happens when the Fed reaches the "liftoff point," when it decides that the IROR should go up? Possibly the margin between the IROR and the fed funds rate stays at about 5 to 15 basis points. Maybe that margin increases. We might make some predictions based on what we think is determining the spread, but those predictions could be wrong, which could be embarrassing for the people running the Fed. For most of the financial system, the relevant opportunity cost of overnight funds is the IROR, not the fed funds rate. But, the Fed sticks to the fiction that the policy rate it cares about is the fed funds rate. The key wrinkle is that, officially, the IROR is set by the Board of Governors, not by the FOMC.

When the Fed first broached the idea of using reverse repurchase agreements (reverse repos) and term deposits, they sold the idea as "introducing reserve-draining tools." Initially, I thought this either represented a misconception about what causes inflation on the part of the Fed. Maybe they didn't understand that this change in the composition of the Fed's liabilities through the use of these tools would have little or no effect on inflation. Or maybe the idea was to reassure people who thought that reserves are money waiting to bust loose and cause a hyperinflation - if you give the reserves another name maybe those people won't be so bothered. Now I'm thinking this might be the brightest idea the Fed has come up with in a long time - at least the reverse repo part.

What's a reverse repo, in this instance? The New York Fed has experimented with small volumes of these transactions, in order to get some practice. As the excerpt above, from the FOMC minutes, indicates, the Fed reverse repo intervention will proceed as follows. The Fed will set a rate at which it will borrow in the overnight repo market, using the government bonds and mortgage-backed securities in its portfolio as collateral. The effect of such a reverse repo transaction is to change the composition of the Fed's liabilities - reserves outstanding are reduced, replaced by a collateralized loan to the Fed from the private sector. You might ask why a loan to the Fed needs to be collateralized. Surely the Fed is going to be good for it. But the Fed already has unsecured liabilties - those are called reserve accounts.

But what could this possibly accomplish? First, take a look at the newly-expanded list of reverse-repo counterparties, from the New York Fed's web site. This list includes the GSEs - Fannie Mae and Freddie Mac. Thus, reverse repos are a roundabout way of paying interest on reserves held by the GSEs, while staying within the bounds of the law. Further, the repo market potentially has a wider list of participants than the fed funds market does, and the fact that the lending is secured (fed funds lending is unsecured) makes the overnight repo rate a potentially better policy rate from the Fed's point of view.

It's possible then, that engaging in reverse repos allows the Fed to tighten up its control over short-term interest rates, while giving the public a better read on the effects of Fed's policies, and on Fed intentions. But, presumably what will happen post-liftoff is that the balances in GSE reserve accounts will disappear overnight into reverse repos with the Fed. There will then essentially be no activity on the fed funds market, and the fed funds rate will become meaningless. Maybe the fed has plans to supply data on overnight repo rates. Maybe such data exist (if so, please let me know). Of course, if the Fed reverse repos enough of its portfolio, it can reduce reserves to pre-crisis levels, which would presumably produce an active fed funds market. Maybe that's what the Fed wants. I know next to nothing about the practicalities of financial market trading, but wouldn't rolling over more than $2 trillion in reverse repos every day be a costly endeavor?

In any case, I think there is more to the reverse repo idea than might meet the eye. I think the Fed should tell us more about it.


Posted by Stephen Williamson at 7:37 PM