We're going to imagine there exists a right-wing version of Paul Krugman, and we'll call him/her APK. APK has a good gig with the Wall Street Journal, or some other such right-wing rag, and is also pissed with the Obama administration. APK thinks that Obamacare is an abomination, and wants a smaller government. For some reason, dating perhaps to his time in graduate school at the University of Chicago, APK just cannot abide nerdy types, particularly the ones armed with functional equations, and would like to hoist those characters on their own petards, as it were. APK went to Chicago in 1976 expecting some kind of low-tech economics on the order of what Stigler and Friedman did, but got that idiot Lucas instead. Good God!

APK reasons that there is an army of people he/she can recruit for the cause - those who have seen only a smattering of undergraduate economics. If they have studied only principles of economics from books like Mankiw or Krugman and Wells, all the better. The game here is that he/she wants to tell an accessible story that should be convincing to this type of person - no more and no less.

The model APK is going to use is a straightforward AD/AS model with a liquidity trap. It's like Krugman's (second figure), except APK reasons that the effect of the debt overhang on the demand for goods is really large, so the AD curve should have a slope smaller than the slope of the AS curve. APK has been reading my blog too, for some reason that I can't figure out, and has come across this post and this one, and that's giving him/her some ideas.

The APK model is in the figure. 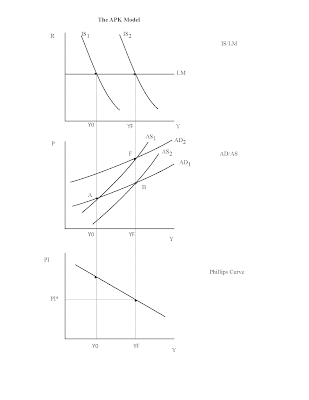 In the IS/LM part of the diagram, we have the liquidity trap case, with a flat LM curve. In the AD/AS portion of the diagram, the AD curve is positively-sloped and flatter than the AS curve because of a large negative effect of private debt (denominated in nominal terms) on the demand for goods. Point A is the initial short-run equilibrium. If there is no government intervention, the economy will ultimately settle in the long run at point B, after the nominal wage falls and the price level rises, restoring market-clearing in the labor market. Along the path to the long run equilibrium, APK reasons, the price level rises at a rate that is higher the larger is the output gap, which gives the Phillips curve in the bottom of the figure. Note that it slopes the opposite way from how we're used to thinking about, undergrads. No need to worry though. This situation is unprecedented. We're in a liquidity trap and weird shit is happening.

So, APK says, we're in a bad situation. In line with other Inflationistas - APK just had Ron Paul over for dinner - APK is worried about high inflation, as his/her model predicts that it should be well above PI*, which is the 2% anticipated rate of inflation that appears to be well-anchored by the Fed. But we don't have to suffer this high inflation for such a long time - possibly until we are all dead - as there is something we can do now now now. APK resons that we can reduce government spending, which will shift the aggregate demand curve left from AD1 to AD2, reduce the inflation rate (though of course the price level is actually higher at F than at B - but APK thinks that people are going to forget about the price level rise quickly), and get all those whiny unemployed people off our backs at point F. How does this happen? Lower government spending unleashes a torrent of private spending because of the rise in the price level that deflates private debts - there is a negative multiplier that can be very large in absolute value.

Hopefully you get the point now. I've used all the elements of Krugman's narrative, I think, and put these things into the model that he likes to argue is all we need to think about the serious macroeconomic problems of the day. And most everything goes the wrong way, in ways that some knee-jerk right-wing cretin would find very appealing. Conclusion? Though AD/AS analysis seems parked forever in undergraduate textbooks, researchers and policy analysts abandoned it long ago for good reasons. Once modern macroeconomists figured out how to incorporate all the standard tools of economic analysis - game theory, general equilibrium theory, contract theory, mechanism design, etc. - in what they were doing, the game was up. Doing it properly keeps everyone honest - we present models so that they can be taken apart and analyzed to see if they square with the preceding research in convincing ways. I don't see how we would want it any other way.

Posted by Stephen Williamson at 12:48 PM