There is a wide class of monetary models that boil down to something like the following. We'll confine attention to a deterministic world - extending this to a stochastic environment isn't a big deal. Given intertemporal optimization, the price of a nominal bond, q(t), in dollars, is determined from the first-order condition

where B is the discount factor, u(.) is the utility function, c(t) is consumption in period t, and p(t) is the price level. Similarly, for money to be held,

A ubiquitous result is the Friedman rule, which says that an optimal monetary policy eliminates inefficiency by reducing L(t) to zero, which implies a zero nominal interest rate, i.e. q(t)=1. Then, supposing an equilibrium in which consumption is constant over time, (1) and (2) give

so the inflation rate is 1/B - 1 < 0 when the central bank runs the Friedman rule, and there is deflation at the optimum. This is the classic notion of a liquidity trap, and why the zero lower bound on nominal interest rates makes some economists fear deflation. In general there are many different monetary policies that will support a zero nominal interest rate forever in this context. This is the traditional sense in which monetary policy does not matter at the zero lower bound. In a basic New Keynesian model, L(t) is always zero as there is no role for money, and instead of (2) the following condition must hold: (4) 1 >= B[u'(c(t+1))/u'(c(t))][p(t)/p(t+1)],

so that people never want to hold money in equilibrium, and (4) holds as long as q(t)<=1, which is just the zero lower bound. In a New Keynesian model, monetary policy is all about correcting relative price distortions - no Friedman rules in that setting. Of course there's much more to liquidity than currency, or the stuff that Milton Friedman might have wanted to include in some monetary aggregate. Various assets, including government debt and asset-backed securities, may have associated liquidity premia, because those assets are held for insurance purposes, because they are exchanged in some class of non-retail transactions, or because they serve as collateral in credit contracts. For example, incomplete-markets Bewley-type models capture an insurance role for assets (see Aiyagari 1994 for example), and new monetarist models (e.g. work by Ricardo Lagos, Guillaume Rocheteau, Randy Wright,or yours truly) get at how the use of assets in exchange and as collateral give rise to liquidity premia.

Some types of models will give us a liquidity premium on bonds, K(t), so instead of (1) we get

Now this gets very interesting. What happens at the zero lower bound? From (2) and (5), if q(t)=1 and both assets are held, L(t) = K(t). Then, if L(t)>0 at the zero lower bound (because all government and central bank liabilities are collectively in short supply), in a stationary equilibrium with constant consumption and a constant liquidity premium, L, from (2),

which is lower than the rate of time preference, and decreasing in the liquidity premium.

The financial crisis involved the destruction of private collateral, in part because of the drop in real estate prices, and the resulting damage in markets for asset-backed securities. Further damage occurred in southern Europe, where the safety of sovereign debt was threatened post-financial crisis. All of this led to a flight to safety - i.e. to U.S. government debt.

Following the logic behind the Friedman rule, the high liquidity premium on government debt reflects an inefficiency. Collateral constraints are tighter, and there is a low stock of liquid assets available for financial exchange and for self-insurance. But the power of monetary policy to mitigate the inefficiency is limited. Basically, it's a fiscal problem. The U.S. government could issue more debt, by temporarily running a higher deficit. But that's not happening, so what can the central bank do about it? In this paper, I assume that the fiscal authority follows a suboptimal policy rule, against which the central bank optimizes, and explore what QE (quantitative easing) does in this context - in particular, swaps of short maturity debt (or reserves) for long-maturity government debt. This can have an effect, which depends on the degree to which short-maturity government debt is better collateral than long-maturity debt. But the effect of QE is to lower the liquidity premium (collateral constraints are relaxed) which , as in equations (6) and (7), will lower inflation and increase the real interest rate. This is a good thing, but if you have been listening to Ben Bernanke, you'll know that this is not the way he thinks QE works. In particular, the thinking at the Fed seems to be that QE will increase inflation and lower real rates. If our problem is indeed a financial inefficiency reflected in a low real interest rate, then the Fed has this turned on its head.

So, suppose we think of the world we're living in now as one where any nonneutralities of money associated with the Fed's interventions during and after the financial crisis have played themselves out. Then, with the nominal interest rate effectively at the zero lower bound, the rate of inflation is being determined primarily by the liquidity premium on government debt. Once we recognize that, it's not surprising that the inflation rate has been falling for the last three years (see the chart). 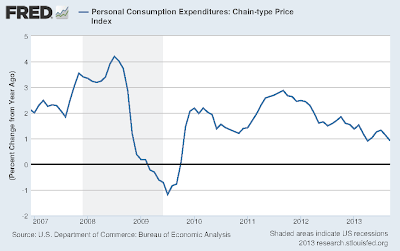 The situation in Europe is looking more stable, and the private sector is presumably finding new sources of private collateral, all of which reduces the liquidity premium on government debt. Further, we should expect this to continue, for example as the price of real estate and other assets rise. In general, if we think that inflation is being driven by the liquidity premium on government debt at the zero lower bound, then if the Fed keeps the interest rate on reserves where it is for an extended period of time, we should expect less inflation rather than more.

But that's not the way the Fed is thinking about the problem. What I hear coming out of the mouths of some Fed officials is that: (i) Things are bad in the labor market, and the Fed can do something about that; (ii) inflation is low. Thus, according to various Fed officials, the Fed can kill two birds with one stone, so it should: (a) keep doing QE; (ii) make it clear that it wants to keep the interest rate on reserves at 0.25% for a very long period of time.

What I hope the discussion above makes clear is that this is a trap for the Fed. There is not much that the Fed can do on its own about the short supply of liquid assets. They can get some action from QE, but the matter is mostly out of their hands, and more QE actually pushes the Fed further from its inflation goal. If the Fed actually wants more inflation, the nominal interest rate on reserves will have to go up. Of course that will lead to some short-term negative effects because of money nonneutralities.

The Fed is stuck. It is committed to a future path for policy, and going back on that policy would require that people at the top absorb some new ideas, and maybe eat some crow. Not likely to happen. The observation of continued low, or falling, inflation will only confirm the Fed's belief that it is not doing enough, not committed to doing that for a long enough time, or not being convincing enough.

Posted by Stephen Williamson at 1:52 PM