Journalists are busy reading the 2008 FOMC transcripts looking for things to write about. Matt Yglesias is no exception, and he has written a piece arguing that Ben Bernanke and his FOMC made a critical blunder on September 16, 2008, which was not to lower the fed funds rate target.

New documents released last week by the Federal Reserve shed important new light on one of the most consequential and underdiscussed moments of recent American history: the decision to hold interest rates flat on Sept. 16, 2008. At the time, the meeting at which the decision was made was overshadowed by the ongoing presidential campaign and Lehman Brothers’ bankruptcy filing the previous day. Political reporters were focused on the campaign, economic reporters on Lehman, and since the news from the Fed was that nothing was changing, it didn’t make for much of a story. But in retrospect, it looks to have been a major policy blunder—one that was harmful on its own terms and that set a precedent for a series of later disasters.

So, it's like there was a fire at City Hall, and five years later a reporter for the local rag is complaining that the floor wasn't swept while the fire was in progress.

Lehman Brothers filed for bankruptcy on September 15, 2008, and an FOMC meeting took place on September 16. On April 30, the target rate for fed funds had been set at 2%. On September 16, the FOMC agreed to keep the fed funds rate target constant at 2%. Seems like this was pretty dim-witted of the committee, given what was going on in financial markets that very day, right? Wrong. At that point, the fed funds market target rate had become completely irrelevant. 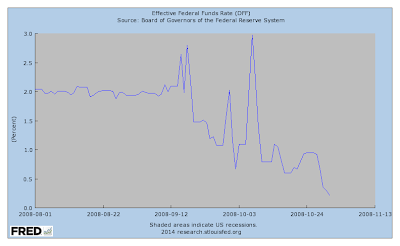 On top of that, an element of Fed activity at the time that was key to the response to the financial crisis was the quantity of loans the Fed was extending to financial institutions. Total borrowing from the Fed looks like this: 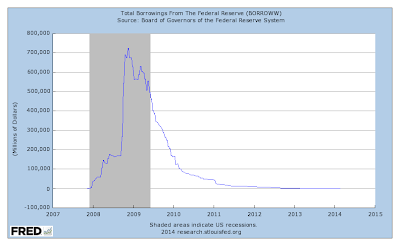 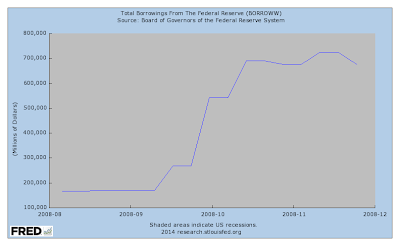 So, though the FOMC didn't change the fed funds rate target in mid-September, the regional Feds were extending credit massively to the financial system through the month of September. 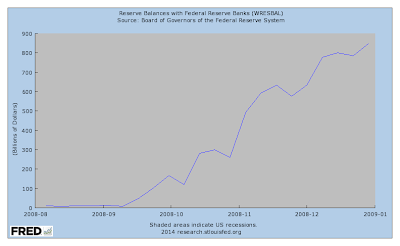 In particular, reserve balances went from $9 billion on September 10 to $47 billion on September 17, to $104 billion on September 24, to $167 billion on October 1. To put this in perspective, daylight financial transactions through the Fed can be supported with a small quantity of reserves. That quantity was sometimes about $5 billion before the financial crisis. So, $47 billion in reserves is a big number. Indeed, it may be a large enough quantity to drive the risk-free overnight rate to its lower bound, which at the time was zero - the interest rate on reserves. On October 1, 2008, the Fed began paying interest on reserves at 0.25%, and that became the floor rate at that time (though for technical reasons the fed funds rate currently is below that rate).

As I discussed in this post, much of what we would like to know about the financial crisis and the policy response cannot be found in FOMC transcripts. Some of the key Fed interventions had to do with: (i) Who borrowed how much and at what rate from the Fed, and what were the related conversations that went on between Fed officials and the officials of the large financial institutions involved? (ii) What assets were purchased by the Fed from what financial institutions, and at what price, and, again, what were the related discussions that occurred involving the Fed and the officials of those financial institutions? Further, we know that the Treasury was involved, and we would like to know what was discussed vis-a-vis the Fed, the Treasury, and the financial community.

Matt Yglesias's piece is written like a blog, not like a well-researched piece of journalism. He cites the FOMC transcripts, and then provides his own interpretation of what is going on. Apparently, there was no attempt to check this with anyone who might have some expertise. Nevertheless, Yglesias is willing to level the charge that the guy who ran the Fed during the crisis made a "big mistake." Unfortunately, it's Yglesias that is making the big mistake.


Posted by Stephen Williamson at 12:29 PM