John Taylor has a blog post which reviews the origin of the Taylor rule and why we should think it's good guidance for central bankers. In making his points, Taylor quotes from a reply I made to a comment on one of my posts, so I'll supply that reply in full:

When Taylor first wrote down his rule, he didn't make any claims that there was any theory which would justify it as some welfare-maximizing policy rule. It seemed to capture the idea that the Fed should care about inflation, and that there exist some non-neutralities of money which the Fed could exploit in influencing real economic activity. He then claimed that it worked pretty well (in terms of an ad hoc welfare criterion) in some quantitative models. Woodford used the Taylor rule to obtain determinacy in NK models, and even argued that it was optimal under some special circumstances. But NK models are very special. Typically they ignore financial factors that I think we can agree are important, and certainly don't address issues to do with what you're calling "financial stability."

You might hope that we could muddle along with a simple Taylor rule driving central bank behavior. It's simple, and maybe close enough to optimal, given what we know. But it's well-known that it can have bad long run properties. For example, the Fed can think that 2% inflation is optimal, but converge to a long-run equilibrium in which inflation is too low. Or the Fed can have incorrect beliefs about the long-run real interest rate, or the output gap, which will imply that the policy is wrong.

Taylor seems to agree with some of that, but he clearly has some differences. Let's focus on his last paragraph:

Later research (which Steve mentions) was very important. The proof of exact optimality of the rule in certain simple models as shown by Mike Woodford (and also Larry Ball) helped improve people’s understanding of why the rule worked well. Finding robustness to a surprisingly wide variety of models was quite useful, as was the historical finding that when monetary policy was close to such a rule, performance was good and when it departed, performance was not so good. But this all depended strongly on the economic theory and policy optimization results in the original research.

What Taylor does not mention is the evidence, for example from Benhabib et al., that Taylor rules can yield unintended consequences - convergence to steady states with inflation below the central bank's target. People might have thought of those results as theoretical curiosities, but some central banks in the world appear to be in danger of exactly that unintended consequence. For example, in the United States, the recent path for the year-over-year pce inflation rate looks like this: 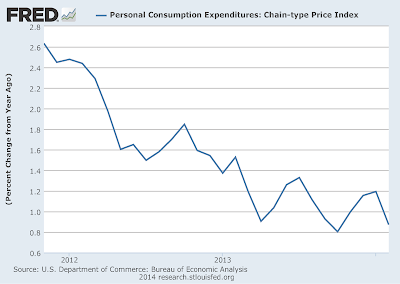 The FOMC took great pains to explain its Taylor rule in the last FOMC statement. But, in spite of the fact that the FOMC's target inflation rate is 2%, and Keynesian output gaps are falling, inflation has been falling for two years, and is well below 2%. Seems not to be working according to plan, don't you think? It's surprising though, that this should surprise anyone.

John Cochrane has more on this in a post from last week. Basically, he sketches a theory to make sense of the notion that, in order to raise the inflation rate to achieve its target, the Fed will have to raise it's nominal policy rate. As he points out, it's important to be specific about the relationship between monetary and fiscal policy. What's left out of his story is the determination of the real interest rate, which is important, but of course John is just giving us a sketch.
Posted by Stephen Williamson at 1:42 PM