Gomme, Ravikumar, and Rupert on the Rate of Return to Capital

Paul Gomme, Ravikumar, and Peter Rupert would like to respond to comments on their 2011 RED paper, and St. Louis Fed Economic Synopsis, in blog posts by Noah Smith and Robert Waldmann. Here, I've put in my own words the results of some email conversations with them.

In the 2011 paper by Gomme et al., the idea is to measure average r at a point in time. In this chart, from their Economic Synopsis, they show us before-tax and after tax rates of return on all capital, and on business capital: 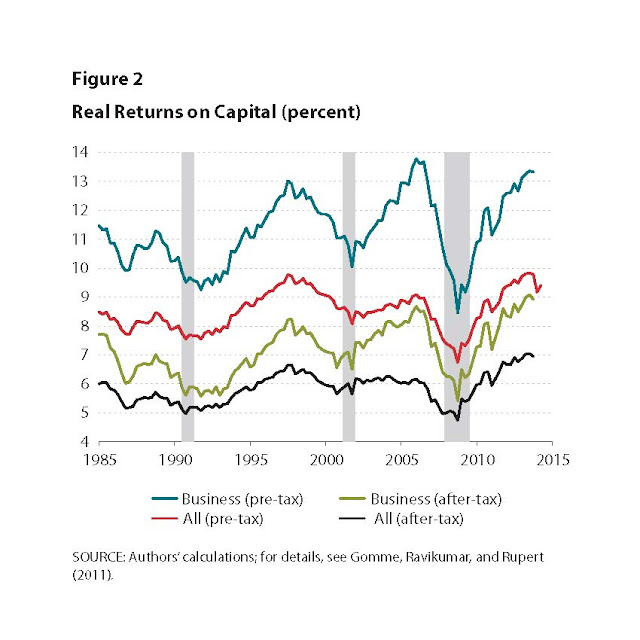 For those calcuations, Gomme et al. work with the measurements the Bureau of Economic Analysis (our national income accountants) provide. In particular, from the flow national income accounts - income side - they take the flow income that can be attributed as factor payments to the owners of the relevant component of the capital stock, then divide by the relevant capital stock, which is also measured by the BEA. So, that is an average rate of return on capital, net of depreciation, measured as a ratio of income (in units of real GDP) to capital (in units of real GDP).

The main thrust of the Economic Synopsis related to "secular stagnation." Larry Summers holds the view that investment expenditures are stagnant because the rate of return on capital is low. Gomme et al. say that no, as measured, the rate of return on capital is not low and, by the way, investment does not appear to be stagnating. "Stagnation" seems an odd characterization given the data, as Gomme et al. point out. That's not saying that the behavior of of investment is not somehow puzzling, i.e. that we don't have to work hard to explain how it is behaving. Just to repeat, here are Figures 3 and 4 from Gomme et al., which certainly don't look like stagnation in investment spending: 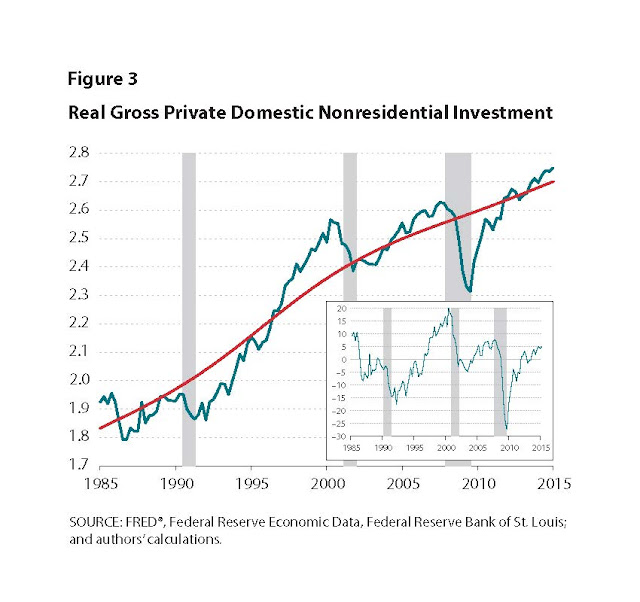 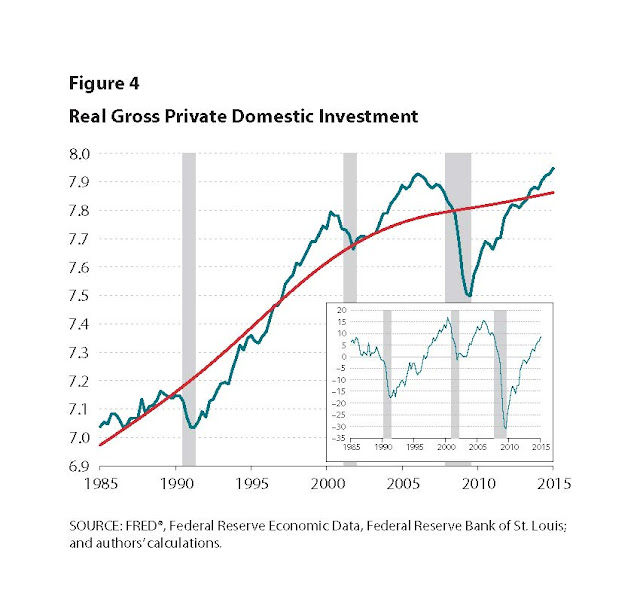 In his post, Noah Smith does in fact express puzzlement that the rates of return in the first chart above are so high currently, while the corporate bond rate is so low. That is, he thinks that investment should be even higher than it is, given those observations, which leads him to conclude:

I suspect that either 1) Gomme et al. have measured the return on capital incorrectly, or 2) basic corporate finance theory doesn't capture what's going on in our economy, or 3) both.

If the recent behavior of investment puzzles Noah, he should also be puzzled as to why there was an investment boom in the 1990s when corporate bonds rates were so high. And if he's worried about the measurement that Gomme et al. report, he should take that up with the Bureau of Economic Analysis.

Posted by Stephen Williamson at 6:50 PM