The State of the Labor Market in the U.S.

I thought this would be a good time to look at a range of labor market data, to see what we can learn. How does labor market performance look relative to performance before the Great Recession? What's different, and why? 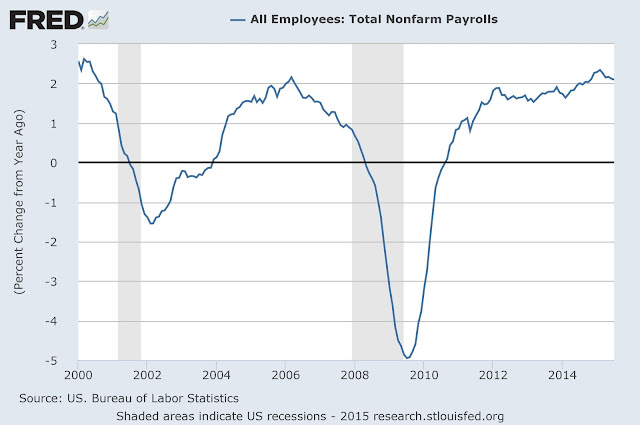 Employment growth is currently in excess of 2%, which is as high as anything we have seen since 2001, though you can find periods of higher employment growth in the 1990s, for example (and in 2000 in the chart). Next, we can look at the employment/population ratio, and the labor force participation rate: 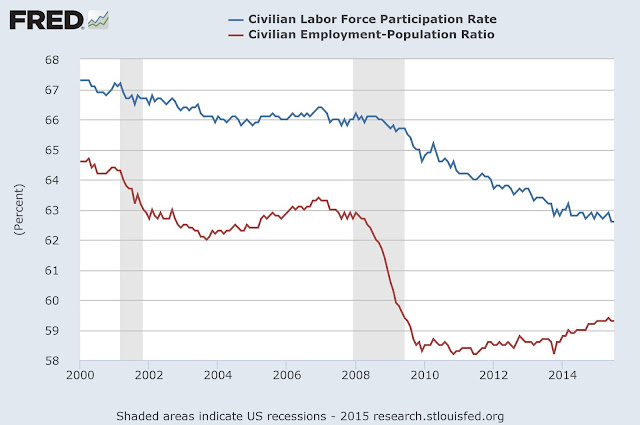 In terms of unemployment rates, let's look at the standard measure - what the BLS calls U3 - and the broadest possible measure, U6, which includes persons marginally attached to the labor force and those who report that they are employed part time for economic reasons: 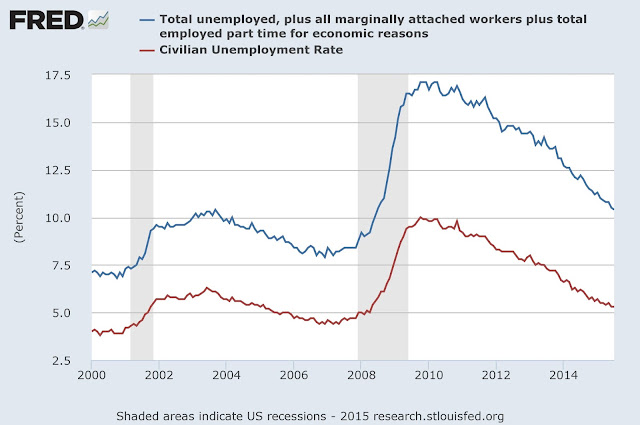 In terms of U3, the current unemployment rate is 5.3%, which we last saw in January 2005, in the midst of the housing boom. So, by the standard measure, the labor market appears to be fairly tight. But U6 is higher than at any time since 2000, which might indicate a labor market that is not tight. Here, we might appeal to other evidence. The U6 measure indicates that there exists an unusually large fraction of labor force participants who report that they are working part-time, would like to work full-time, but cannot, for "economic reasons." But if we look at hours worked per employee on nonfarm payrolls, this is what we see: 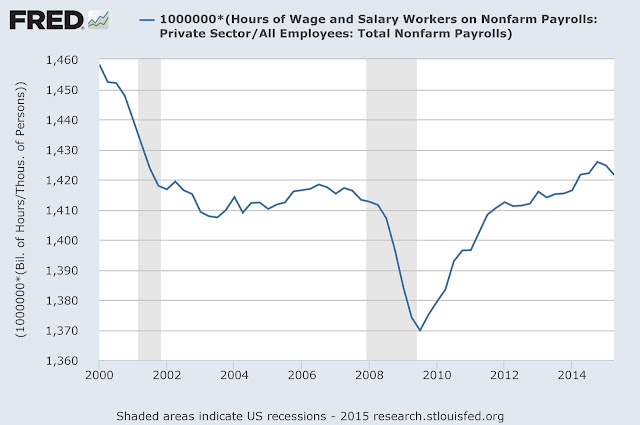 So, by this measure, the average worker is working more hours per month than at any time since the 2001-2002 recession. This perhaps reflects the pitfalls of taking the CPS data too seriously. As economists we would like good measures of what economic agents are actually doing. In the labor market, we would like to know exactly how labor force participants use their time - how much time is spent searching for a job, what exactly this search entails, how much search employed workers do, how non-participants spend their time, etc. The CPS actually tells us little about what we really want to know.

Another way to slice the unemployment data is to look at unemployment rates by duration. The BLS reports the number of unemployed less than 5 weeks, 5-14 weeks, 15-26 weeks, and 27 weeks and over, so we can take these numbers and express them as rates, relative to the labor force. Here's what we get: 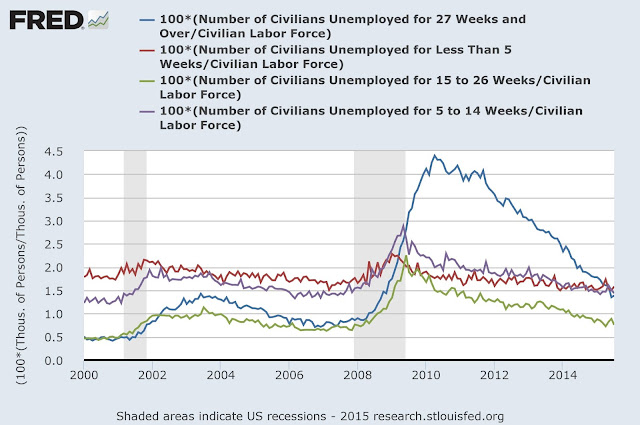 One feature of how the labor market looks different from before the Great Recession is captured in the Beveridge curve relationship, as shown here (vacancy rate vs. unemployment rate): 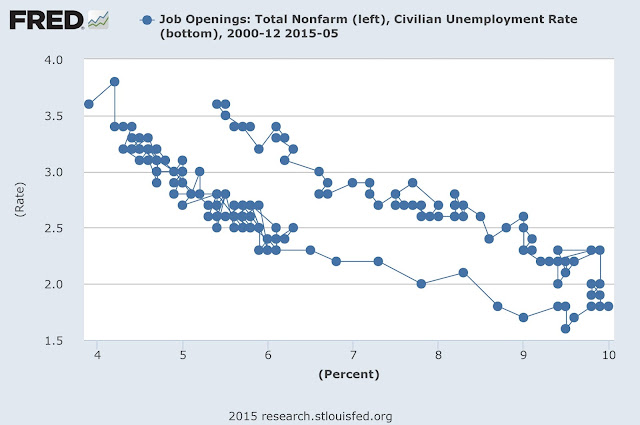 We're interested in the Beveridge curve, in part because the relationship falls out of conventional Mortensen-Pissarides search models of the labor market. In that model, we think of low unemployment and high vacancies as capturing a tight labor market, and high unemployment and low vacancies a slack labor market. In the figure, the line joins points in the scatter plot sequentially in time, moving to the southeast as the recession worsens, then up and toward the northwest as the recovery proceeds. Early in the post-recession period, people were speculating as to whether the rightward shift in the Beveridge curve was due to cyclical factors (the Beveridge curve always shifts rightward in a recession) or some phenomenon related to mismatch in the labor market (the unemployed don't have skills that match well with the posted vacancies). Perhaps surprisingly, the Beveridge curve has not shifted back, with the end of the Great Recession now more than 6 years in the rearview mirror. That would seem to put the kabosh on cyclical explanations for the phenomenon. But it's not clear that mismatch fares any better in explaining the Beveridge curve shift. If that's the explanation, why doesn't the mismatch between the searchers and the searched-for go away?

Other interesting, and unusual, observations relate to initial claims for unemployment insurance. If we plot initial claims relative to the size of the labor force (a weekly flow rate, in percentage terms), we get this: 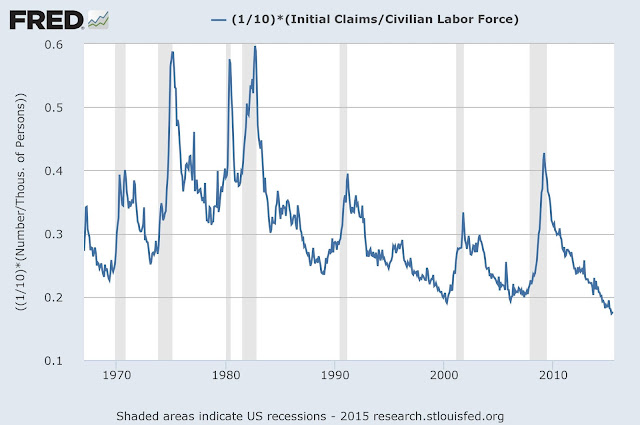 That's quite remarkable, as this measure is at its lowest level in the sample considered in the chart. To receive unemployment insurance (UI), one has to be eligible, and the eligibility requirements include having been sufficiently employed during the recent past. Thus, if I am out of the labor force, and search unsuccessfully for work, I can't collect UI. So, initial claims can be missing something, in terms of capturing labor market tightness. Further, the "takeup rate," which is the fraction of eligible unemployed who actually apply for UI, is known to be countercyclical - people tend not to apply for UI if they anticipate that they will get a job soon, for example. But, this works in our favor as, if we're interested in capturing the tightness of the labor market, initial claims will in part reflect forecasts of the unemployed about their probabilities of finding work. 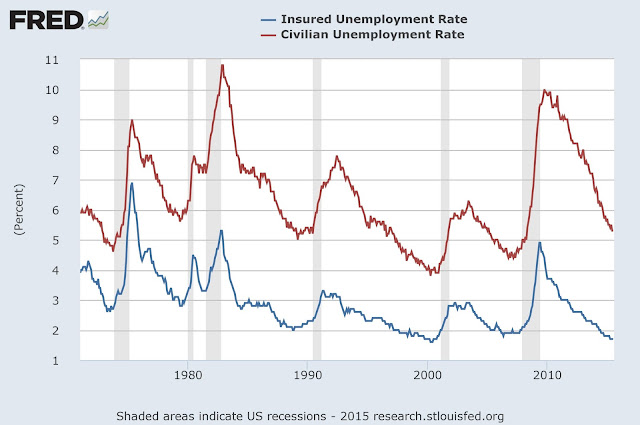 As with the initial claims rate, the insured unemployment rate is currently at its lowest level in the whole sample. Further, note that before the recession, about 40% of the unemployed were receiving UI, this rose to about 50% at the peak of the recession, and has fallen to about 30%. This reflects the relatively large fraction of longer-term unemployed, who typically cannot receive UI for more than 26 weeks. 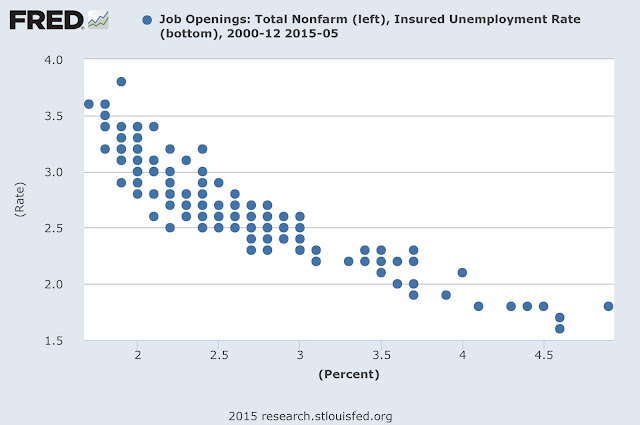 That looks quite stable. Further, currently we're about as far to the northwest in that chart as we have been since the vacancy rate data has been collected, i.e. if we measure labor market tightness as the ratio of vacancies to insured unemployed, the labor market is as tight as it's ever been, post-2000.

There are also interesting details in the labor market flows, as measured in the CPS. We'll look at flow rates, as a percentage of working age population, among the three labor market states: employed, unemployed, and not-in-the-labor-force (NILF). First, flow rates into employment: 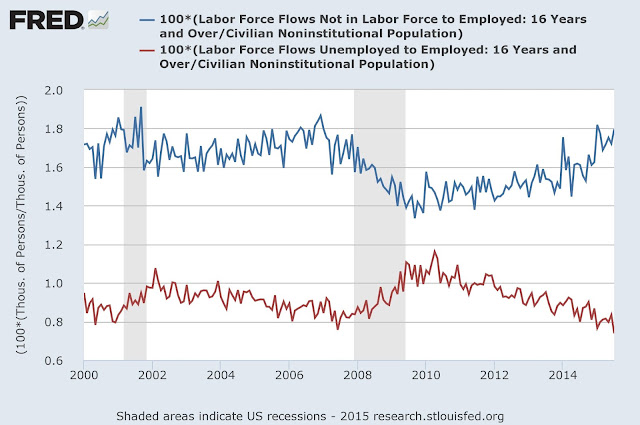 Note here, that the flow into employment from NILF is always larger than the flow from unemployment. Maybe you knew this, but it's news to me. Maybe this comes from thinking too much in terms of Mortensen-Pissarides, where there are only two labor force states (employed and unemployed), and a spell of employment is always preceded by a spell of unemployment. Perhaps people should be thinking more about the NILF state. In any case, both of these rates have returned roughly to where they were before the recession. 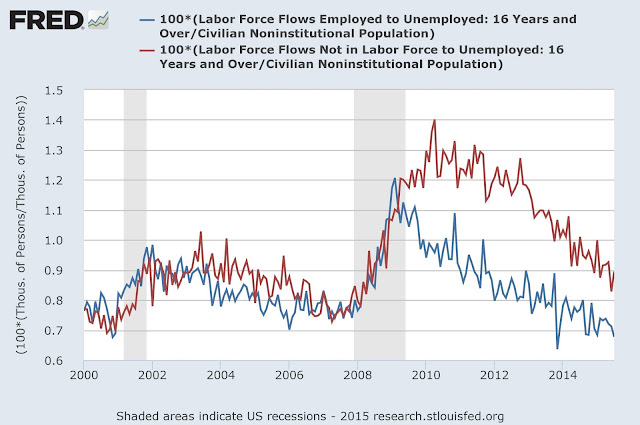 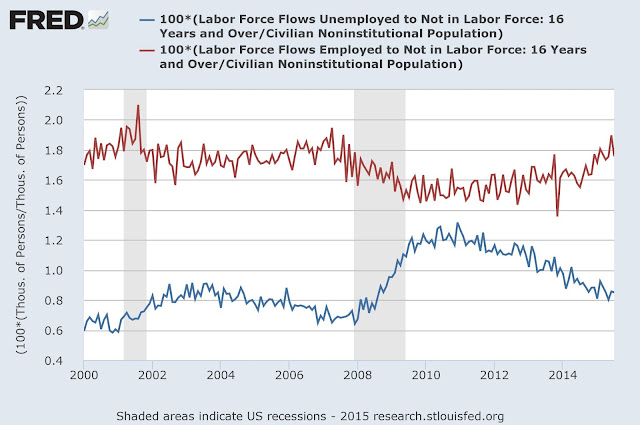 This one is pretty interesting. Note that, before the recession, the flow into NILF directly from employment was typically more than twice the flow from unemployment to NILF. So, in good times, people typically drop out of the labor force due to retirement, illness, for fertility reasons, to go back to school, etc., rather than because they could not find work. Of course, that changes during the recession, when far more people search for work, then drop out of the labor force. An interesting feature of the data is that, in the Great Recession, in contrast to the 2001-02 recession, the flow from employment to NILF drops instead of increasing. Possibly far fewer people were retiring because of large drops in the value of retirement accounts. While the flow of people from unemployment to NILF remains high - presumably this is the long-term unemployed dropping out of the labor force - the flow to NILF from employment has increased to pre-recession levels. You can see why the labor force participation rate continues to decline (in terms of accounting).

Finally, we can look at the behavior of market wages. We'll look at year-over-year increases in average hourly earnings and the employment cost index: 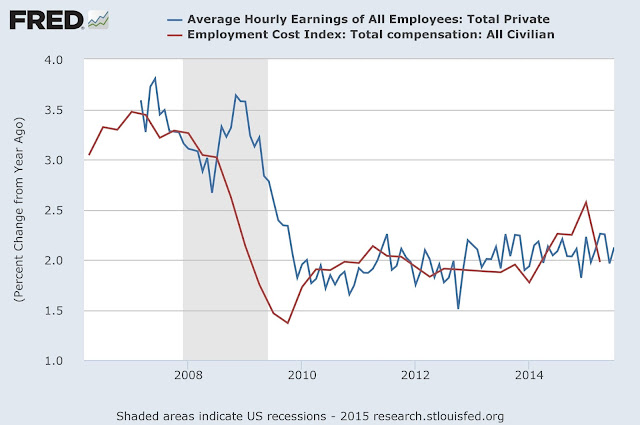 Here, the main story is a drop in nominal wage growth from the neighborhood of 3.5% per year before the recession, to the neighborhood of 2% currently. What to make of this? The next chart shows the real wage, measured as average hourly earnings divided by the PCE deflator (headline), and average labor productivity, measured as real GDP per hour of payroll employment. 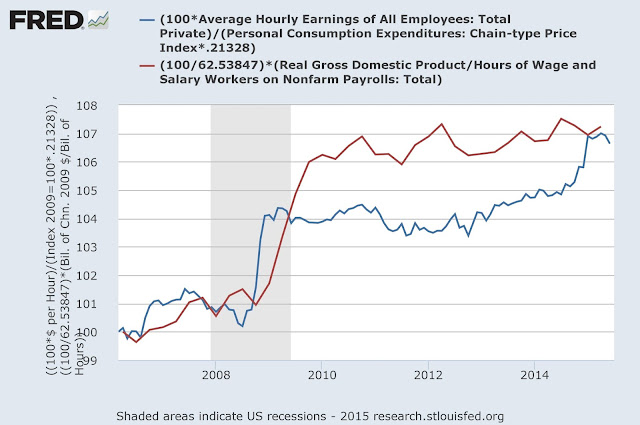 You can see that from the beginning to the end of the sample, wage and productivity growth are almost identical, as standard theory would tell us. The anomaly here is in the behavior of productivity and wages during the Great Recession. Typically the real wage is acyclical (depending on how you measure it), and average labor productivity is procyclical, but obviously this recession was very different, with large increases in both productivity and real wages. A concern here, of course, is the anemic post-recession growth in productivity.

What are the key conclusions we should draw from this? Employment growth is currently strong, and by most measures the labor market is currently somewhat tight to very tight. While labor force participation is low and falling, and there is an unusually large number of long-term unemployed relative to pre-recession times, those observations are tempered by observed flow rates from NILF to the labor force that are comparable to pre-recession times. Given the currently elevated number of long-term unemployed, the unemployment rate could drop much lower than it is now - possibly as low as 4.5-4.8%.
Posted by Stephen Williamson at 2:35 PM