Larry Summers has a post in the Financial Times about - you guessed it - secular stagnation, and what he doesn't like about current monetary policy. In case you are looking for clarification on what Summers's theory of secular stagnation is all about, you won't find it here. He observes, as is well-known, that real rates of interest are low and expected (based on current asset prices) to remain so for some time. Why are real interest rates low? According to Summers, because of secular stagnation. And...

...secular stagnation is the hypothesis that the IS curve has shifted back and down so that the real interest rate consistent with full employment has declined.

Which does not tell me much. Maybe I can find the answer in this transcript of a Summers conference talk, which he references. Here's the relevant passage:

...broad technological features of the economy have changed that should not have been expected to be constant. That there are a variety of trends that are evolving that have led to lower real rates with the right presumption being that that will continue to be the case for quite some time to come.

What exactly are these "broad technological features" that changed? Apparently we should have expected them to change, whatever they are. What is the "variety of trends" and how are they evolving? Suffice to say that the broad technological features have changed in a persistent way, and along with the variety of evolving trends will cause low real rates of interest to continue to be low indefinitely. If you're enlightened by this, you'll have to explain it to me.

Now, on to Summers's policy critique. He has four complaints.

There are many ways to measure anticipated inflation. We can use inflation swaps data, as Summers does; we can look at the breakeven rates implied by the yields on nominal Treasury securities and TIPS; and we can look at survey measures. What do people who do forecasting for a living, and who have access to all of that data, say? The Philly Fed's most recent Survey of Professional Forecasters has predictions of PCE headline inflation for 2016 and 2017, respectively, of 1.8% and 1.9%, which is pretty close to the 2% PCE inflation target. A Wall Street Journal survey shows a CPI inflation forecast that seems roughly consistent with the December FOMC projections for PCE inflation. So, it seems that "most available data," filtered through the minds and models of professional forecasters, suggests no less optimism than the FOMC is expressing in its projections, about achieving 2% inflation in the future.

Second, the Fed seems to mistakenly regard 2 per cent inflation as a ceiling not a target. One can reasonably argue that after years of below target inflation, it is appropriate to have a period of above target inflation. This is implied by arguments for price level targeting. Alternatively, it seems reasonable to simply suggest that the Fed should run equal risks of over and under shooting its inflation target. I would actually argue given the observed costs of deflation that the costs of under shooting the target exceed the costs of overshooting it.

In its updated "Statement of Longer-Run Goals and Policy Strategy," the FOMC tells us, with respect to its inflation target,

The Committee reaffirms its judgment that inflation at the rate of 2 percent, as measured by the annual change in the price index for personal consumption expenditures, is most consistent over the longer run with the Federal Reserve’s statutory mandate.

So, the goal is clearly 2 percent inflation, as measured using the headline PCE deflator. Is this a "ceiling," as Summers states? Later in the document, the FOMC states:

So, deviations of inflation from 2%, on both the high and low sides, are considered by the FOMC to be undesirable. Why does it look to Summers as if 2% is a ceiling? He doesn't give us much to go on.

Third, the Fed seems to be in the thrall of notions that might be right but do not to my knowledge have analytic support premised on the idea that the rate of change of interest rates as distinct from their level influences aggregate demand. It is suggested that by raising rates the Fed gives itself room to lower them. This is tautologically true but I know of no model in which demand will be stronger in say 2018 if rates rise and then fall than if they are kept constant at zero. Nor conditional on their reaching say 3 per cent at the end of 2017 do I know of a reason why recession is more likely if the changes are backloaded. I would say the argument that the Fed should raise rates so as to have room to lower them is in the category with the argument that I should starve myself in order to have the pleasure of relieving my hunger pangs.

Unlike Summers, I do know of a model in which "...demand will be stronger in say 2018 if rates rise and then fall than if they are kept constant at zero." It's a model that Summers should like - a plain vanilla reduced-form New Keynesian model. This comes from Jim Bullard's "Permazero" speech, with reference to work by John Cochrane. Here, I'll extract Jim's Figure 2 from his talk: 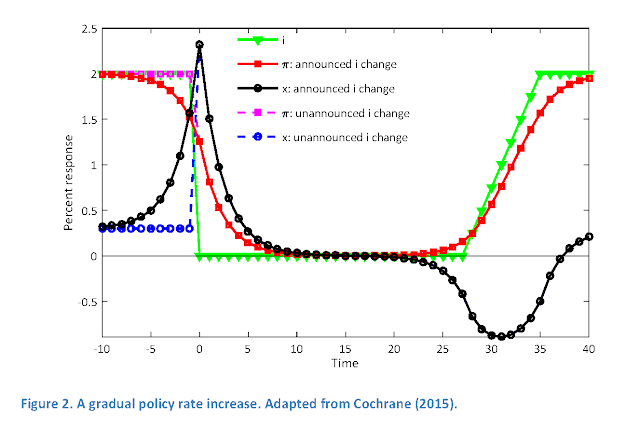 Fourth, the Fed is likely underestimating secular stagnation. It is failing to recognise its transmission from the rest of the world and it is overestimating the degree of monetary accommodation now present and likely to be present in the future by overestimating the neutral rate. I suspect that if nominal interest rates were 3 per cent and inflation were far below target there would be much less pressure to raise them than there has been of late. The desire to raise rates reflects less some rigorous Philips curve analysis than a sense that zero rates are a sign of pathology and an economy creating 200,000 jobs a month is not diseased. The complexity is that zero rates may be less abnormal than is supposed because of fundamental shifts in the saving investment balance.

For this, it helps to focus on a three key sentences in this paragraph:

1. "...the Fed is likely underestimating secular stagnation." Since Summers has not defined the concept clearly, it's hard to see how anyone could pay too little attention to it. But economists - both inside the Fed and outside - certainly are not ignoring the phenomenon of low real interest rates and the implications. Far from it.
2. "I suspect that if nominal interest rates were 3 per cent and inflation were far below target there would be much less pressure to raise them than there has been of late." Here's the time series for the fed funds rate and PCE inflation since 1960: 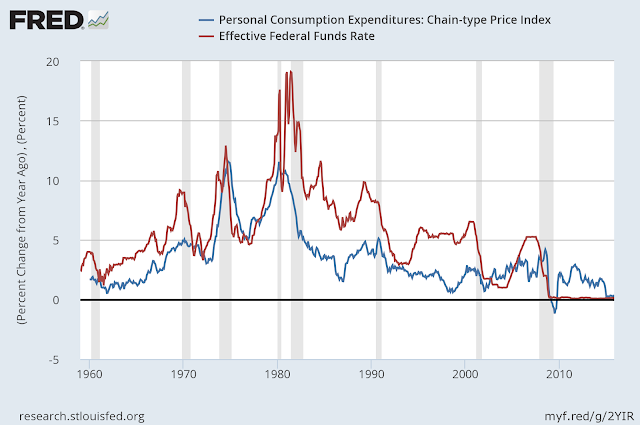 If we take "inflation far below target" to mean zero or lower, say, then a 3% fed funds rate and and inflation far below target has never occurred in the time series since 1960. If it did occur, then I think people would be scratching their heads about it. Would the Fed be talking about raising rates? Who knows? Seems like asking what you would do if you came around a bend in the road and encountered a two-headed goat.
3. "The desire to raise rates reflects less some rigorous Philips curve analysis than a sense that zero rates are a sign of pathology and an economy creating 200,000 jobs a month is not diseased." First, I'm not a big fan of using "rigorous" and "Phillips curve" in the same sentence. Second, it is true that a standard argument for liftoff is that that the current level of the policy rate is not consistent with: (i) past Fed behavior and (ii) the proximity of inflation and unemployment to the Fed's goals. So, to justify continued zero interest rate policy, one would have to make a case that there is something wrong with the way policy was conducted in the past, or something different about current circumstances. Summers might say that the different circumstance is secular stagnation. If so, he needs to be more explicit about what this is about.
Posted by Stephen Williamson at 1:43 PM