The primary "liabilities" currently on the Fed's balance sheet are currency (Federal Reserve notes and coins), reserves (roughly, checking accounts of financial institutions held with the Fed), and reverse repos (ON-RRPs discussed in this post), which play an important role in the Fed's intervention to control overnight interest rates. Currency and reserves are not liabilities in the sense that private debt instruments are liabilities. A corporate bond, for example, is a promise to make a future stream of payments. Currency represents only a promise to exchange one type of note for another - the Fed will exchange new Federal Reserve notes for ones that are worn out, and it stands ready to exchange four fives for a twenty, for example. Not everyone can have a reserve account, but for those institutions that do, the Fed makes some other promises - it stands ready to exchange one unit of currency for one unit of reserves, and vice-versa. ON-RRPs are different, in that they conform to the same rules as private secured debt. In particular, in an ON-RRP transaction, the Fed posts collateral in its portfolio (Treasury securities or agency mortgage-backed securities) to secure loans that are typically made overnight (though the Fed sometimes makes use of term ON-RRPs).

But central bank liabilities are obligations in an indirect sense. That is, the Fed makes promises about the future purchasing power of its liabilities. Central bank liabilities are unique: currency is a medium of exchange which no private financial institution issues, and Fed reserves play a special role in settling large transactions among financial institutions. The Fed has determined that Fed liabilities will perform these roles well if it commits to a 2% target for the annual rate of increase in the personal consumption expenditures deflator (the PCE deflator). That's a promise - a commitment. If the Fed keeps that promise, then this should reduce uncertainty concerning the real value of payments in long-term contracts, and thus make credit markets and the markets for goods and services work more efficiently.

So, how has that been going? 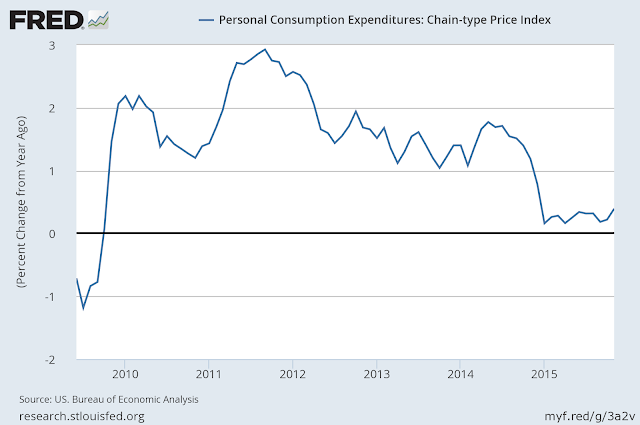 We are now well into our fourth year of sub-2% inflation. Of course, oil prices that have been falling since mid-2014 share some of the responsibility, but there is some concern (see this speech by Jim Bullard) that the additional oil price decreases we have seen will further prolong very low inflation. 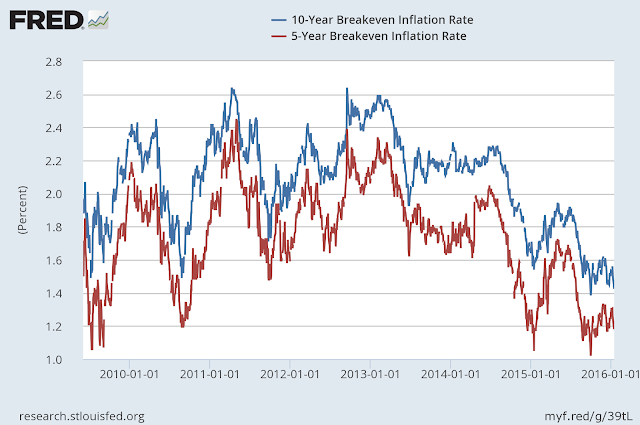 Then, the five-year breakeven rate is the average rate of inflation that would have to occur over the next five years for a nominal 5-year Treasury security and a 5-year TIPS to bear the same average return. We could then take this as a measure of the average anticipated inflation rate over the next 5 years. There are three potential problems, though:

1. TIPS securities compensate investors for CPI (consumer price index) inflation. But the Fed cares about PCE inflation. The CPI is known to generate an upward-biased measure of inflation.
2. An investor in a TIPS does not make a payment to the Treasury when CPI inflation is negative - inflation compensation goes to zero whenever CPI inflation is less than zero.
3. Breakeven rates can reflect aggregate risk, which is variable over time.
4. Breakeven rates can reflect market liquidity. For example if the TIPS market is less liquid than the market in nominal Treasuries, this will bias the breakeven rate downward as an estimate of expected inflation. And market liquidity can vary over time.

Another measure of anticipated inflation is the 5-year, 5-year forward rate, which is a measure derived from bond yields of the average 5-year inflation rate anticipated 5 years from now: 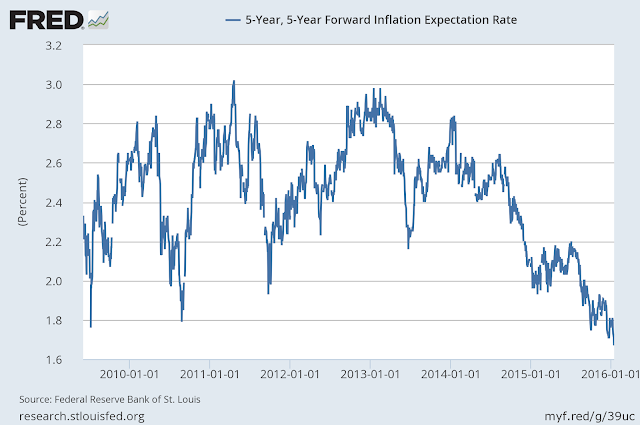 There has been a flurry of concern in the last few days that all of these market-based measures of expected inflation have come down significantly in the last two years. If we believe these inflation measures, then we might be worried that the Fed's commitment to 2% inflation has become incredible - possibly market participants aren't buying it. And that would be bad. But the Atlanta Fed says we shouldn't worry. According to them, if we correct for the biases in standard market-based inflation expectations measures, inflation expectations have been quite stable.

Here's an example where that idea didn't work: 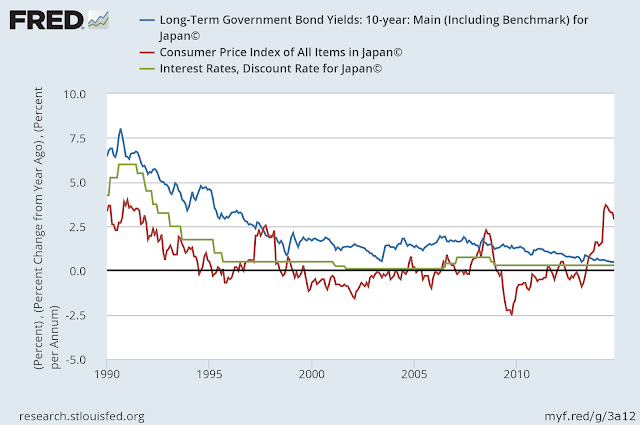 In the early 1990s, the Bank of Japan reduced short-term interest rates - you can see in the picture that the policy rate came down and has stayed close to zero ever since. In Japan, 20 years of ZIRP (zero interest rate policy), served only to produce an inflation rate that averaged about zero. You can see the drop in inflation expectations in the early 1990s in Japan, reflected in the falling 10-year government bond yield, which stays low, and even falls further, to where it is today. In the late 1990s, Japan looked much like the U.S. today (at least with respect to the measurements in the chart). Inflation was about zero, the 10-year bond yield was at about 2%, and the central bank's policy rate was close to zero. Some people, including Naryana, think that backtracking on liftoff would be a good idea for the Fed, given low inflation, and supposing that what we're seeing in market-based inflation expectations measures is measuring what's going on. But the Japanese did that experiment - after the late 1990s they stayed with ZIRP, and inflation just went below zero.

Some have argued that, if extended ZIRP doesn't work, then there are other ways to get inflation up. Again, the Bank of Japan has been doing a great job of doing the required experiments for us. In April 2013, they embarked on a major quantitative easing project, which is reflected in Japan's monetary base as follows: 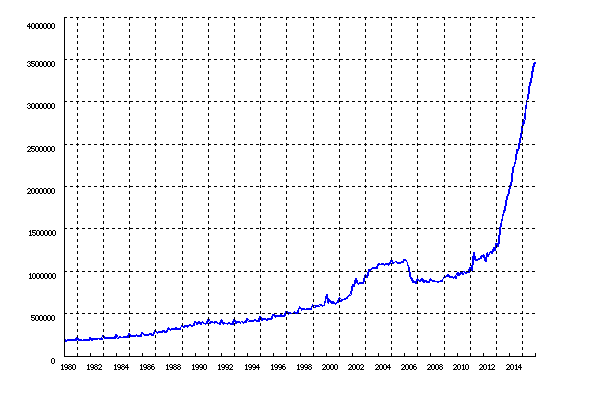 So, Japan is on the road to tripling the size of its balance sheet since the inception of the QE program in April 2013. What's happened to the CPI? 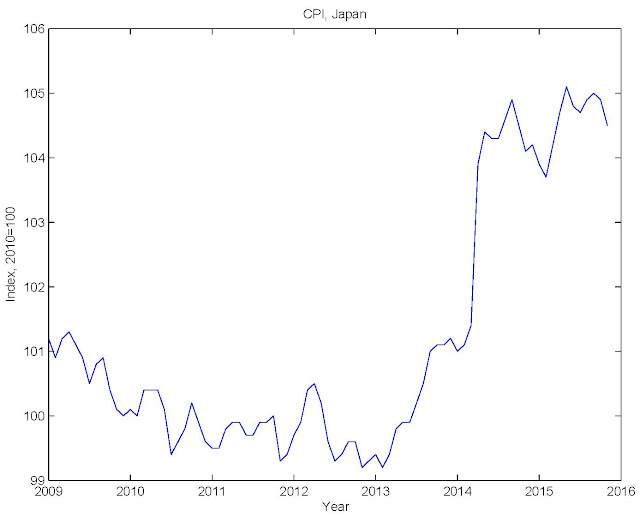 There was a burst of inflation in 2014, which appears to have had more to do with the direct effects of the consumption tax on the CPI, but inflation has essentially been absent since April 2014, in spite of a massive QE program. You can blame oil prices, but if QE actually works as advertised, it should have overcome that.

Another suggestion is that, if all else fails, the central bank's policy interest rate can always go negative. However, theory, and experience, tells us that doesn't work either. The most egregious case is Switzerland, which currently has an overnight interest rate of -0.7%, and an inflation rate of -1.4%.

So, this seems straightforward. If you're a central banker and want to increase inflation, don't model your behavior on a central bank that can't do it. Take as an example someone who's serious about it, and can produce results. Arthur Burns (Fed Chair, 1970-1978), and G William Miller (Fed Chair, 1978-1979) seem to have known the trade. What did they do? 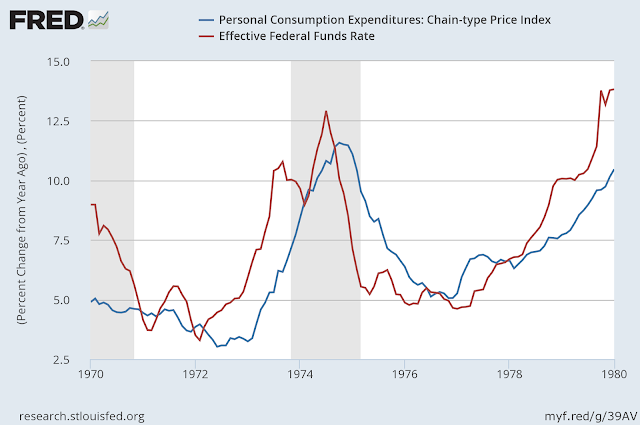 Over the 1970s, the fed funds rate moved pretty closely with inflation. And it doesn't appear to be responding passively - through most of the period the fed funds rate leads inflation. Burns and Miller left a legacy of high inflation for someone else to clean up, but at least they showed us how neo-Fisherian policy works. Don't think in terms of Phillips curves - worry about the Fisher effect. Higher nominal interest rates mean higher inflation.
Posted by Stephen Williamson at 4:15 PM