What is full employment anyway, and how would we know if we are there?

What are people talking about when they say "full employment?" Maybe they don't know either? Whatever it is, "full employment" is thought to be important for policy, particularly monetary policy. Indeed, it typically enters the monetary policy discussion as "maximum employment," the second leg of the Fed's dual mandate - the first leg being "price stability."

Perhaps surprisingly, there are still people who think the US economy is not at "full employment." I hate to pick on Narayana, but he's a convenient example. He posted this on his Twitter account:

Are we close to full emp? In steady state, emp. growth will be about 1.2M per year. It's about *twice* that in the data. (1) Employment is growing much faster than long run and inflation is still low. Conclusion: we're well below long run steady state. end

Also in an interview on Bloomberg, Narayana gives us the policy conclusion. Basically, he thinks there is still "slack" in the economy. My understanding is that "slack" means we are below "full employment."

Again, even if we accept all of Narayana's assumptions, we could disagree about his policy recommendation. Maybe the increase in the fed funds rate target will do little to impede the trajectory to full employment. Maybe it takes monetary policy a period of time to work, and by the time interest rate hikes have their effect we are at full employment. Maybe the interest rate hikes will allow the Fed to make progress on other policy goals than employment. But let's explore this issue in depth - let's investigate what we know about "full employment" and how we would determine from current data if we are there or not.

But, we measure employment in more than one way. This chart shows year-over-year employment growth from the establishment survey, and from the household survey (CPS):

For the last couple of years, employment growth has been falling on trend, by both measures. But currently, establishment-survey employment is growing at 1.6% per year, and household survey employment is growing at 1.0% per year. The latter number is a lot closer to 0.8%. The establishment survey is what it says - a survey of establishments. The household survey is a survey of people. The advantages of the establishment survey are that it covers a significant fraction of all establishments, and reporting errors are less likely - firms generally have a good idea how many people are on their payrolls. But, the household survey has broader coverage (includes the self-employed for example) of the population, and it's collected in a manner consistent with the unemployment and labor force participation data - that's all from the same survey. There's greater potential for measurement error in the household survey, as people can be confused by the questions they're asked. You can see that in the noise in the growth rate data in the chart.

So, I think that the conclusion is that we should temper our view of employment growth. Maybe it's much closer to a steady state rate than Narayana thinks.

But, on to some other measures of labor market performance. This chart shows the labor force participation rate (LFPR) and the employment-population ratio (EPOP).

So, by this measure the labor market is at its tightest since 2001. Job openings are plentiful relative to would-be workers.

People who want to argue that some slack remains in the labor market will sometimes emphasize unconventional measures of the unemployment rate: 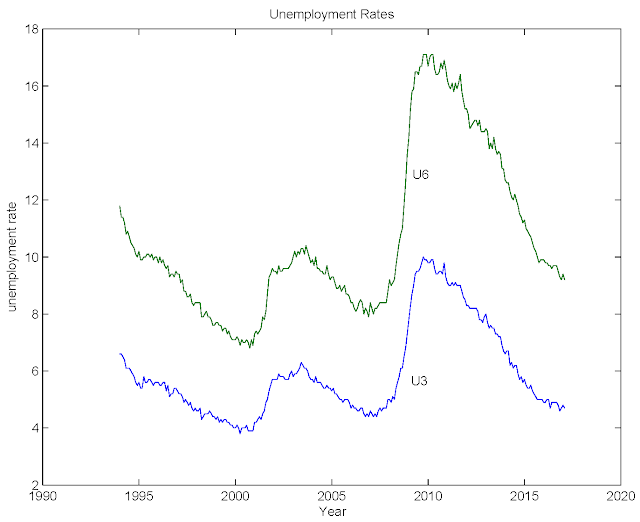 In the chart, U3 is the conventional unemployment rate, and U6 includes marginally attached workers (those not in the labor force who may be receptive to working) and those employed part-time for economic reasons. The U3 measure is not so far, at 4.7%, from its previous trough of 4.4% in March 2007, while the gap between current U6, at 9.2% and its previous trough, at 7.9% in December 2006, is larger. Two caveats here: (i) How seriously we want to take U6 as a measure of unemployment is an open question. There are problems even with conventional unemployment measures, in that we do not measure the intensity of search - one person's unemployment is different from another's - and survey participants' understanding of the questions they are asked is problematic. The first issue is no worse a problem for U6 than for U3, but the second issue is assuredly worse. For example, it's not clear what "employed part time for economic reasons" means to the survey respondent, or what it should mean to the average economist. Active search, as measured in U3, has a clearer meaning from an economic point of view, than an expressed desire for something one does not have - non-satiation is ubiquitous in economic systems, and removing it is just not feasible. (ii) What's a normal level for U6? Maybe the U6 measure in December 2006 was undesirably low, due to what was going on in housing and mortgage markets.

Another labor market measure that might be interpreted as indicating labor market slack is long term unemployment (unemployed 27 weeks or more) - here measured as a rate relative to the labor force:

This measure is still somewhat elevated relative to pre-recession times. However, if we look at short term unemployment (5 weeks or less), this is unusually low:

As well, the insured unemployment rate (those receiving unemployment insurance as a percentage of the labor force) is very low:

To collect UI requires having worked recently, so this reflects the fact that few people are being laid off - transitions from employment to unemployment are low.

An interpretation of what is going on here is that the short-term and long-term unemployed are very different kinds of workers. In particular, they have different skills. Some skills are in high demand, others are not, and those who have been unemployed a long time have skills that are in low demand. A high level of long-term unemployed is consistent with elevated readings for U6 - people may be marginally attached or wanting to move from part-time to full-time work for the same reasons that people have been unemployed for a long time. What's going on may indicate a need for a policy response, but if the problem is skill mismatch, that's not a problem that has a monetary policy solution.

So, if the case someone wants to make is that the Fed should postpone interest rate increases because we are below full employment - that there is still slack in the labor market - then I think that's a very difficult case to make. We could argue all day about what an output gap is, whether this is something we should worry about, and whether monetary policy can do much about an output gap, but by conventional measures we don't seem to have one in the US at the current time. In terms of raw economic performance (price stability aside), there's not much for the Fed to do at the current time. Productivity growth is unusually low, as is real GDP growth, but if that's a policy problem, it's in the fiscal department, not the monetary department.

But there is more to Narayana's views than the state of the labor market. He thinks it's important that inflation is still below the Fed's target of 2%. Actually, headline PCE inflation, which is the measure specified in the Fed's longer-run goals statement, is essentially at the target, at 1.9%. I think what Narayana means is that, given his Phillips-curve view of the world, if we are close to full employment, inflation should be higher. In fact, the long-run Fisher effect tells us that, after an extended period of low nominal interest rates, the inflation rate should be low. Thus, one might actually be puzzled as to why the inflation rate is so high. We know something about this, though. Worldwide, real rates of interest on government debt have been unusually low, which implies that, given the nominal interest rate, inflation will be unusually high. But, this makes Narayana's policy conclusion close to being correct. The Fed is very close to its targets - both legs of the dual mandate - so why do anything?

A neo-Fisherian view says that we should increase (decrease) the central bank's nominal interest rate target when inflation is too low (high) - the reverse of conventional wisdom. But maybe inflation is somewhat elevated by increases in the price of crude oil, which have since somewhat reversed themselves. So, maybe the Fed's nominal interest rate target should go up a bit more, to achieve its 2% inflation target consistently.

Though Narayana's reasoning doesn't lead him in a crazy policy direction, it would do him good to ditch the Phillips curve reasoning - I don't think that's ever been useful for policy. If one had (I think mistakenly) taken Friedman to heart (as appears to be the case with Narayana), we might think that unemployment above the "natural rate" should lead to falling inflation, and unemployment below the natural rate should lead to rising inflation. But, that's not what we see in the data. Here, I use the CBO's measure of the natural rate of unemployment (quarterly data, 1990-2016): 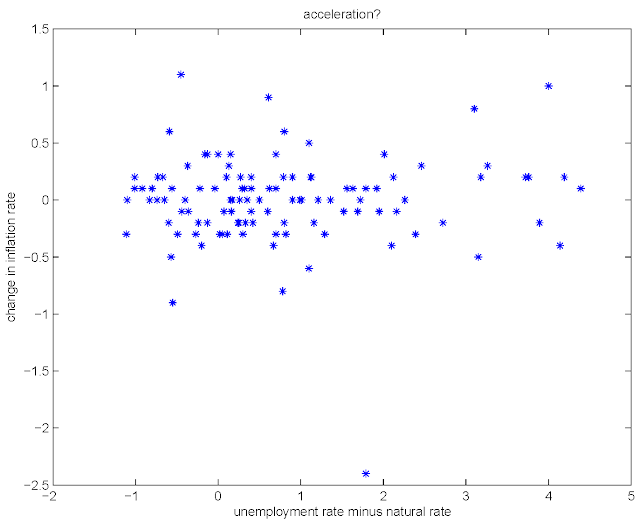 According to standard Friedman Phillips-curve logic, we should see a negative correlation in the chart, but the correlation is essentially zero.

Posted by Stephen Williamson at 2:48 PM