What's Up With Inflation? 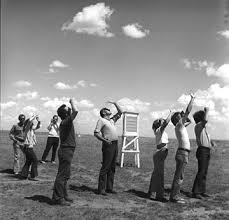 In the past year, inflation rates have increased in a number of countries. Are these increases temporary or permanent? What do they imply for monetary policy?

One of the more stark turnarounds in inflation performance is in Sweden. To see what is going on, it helps to look at CPI levels: 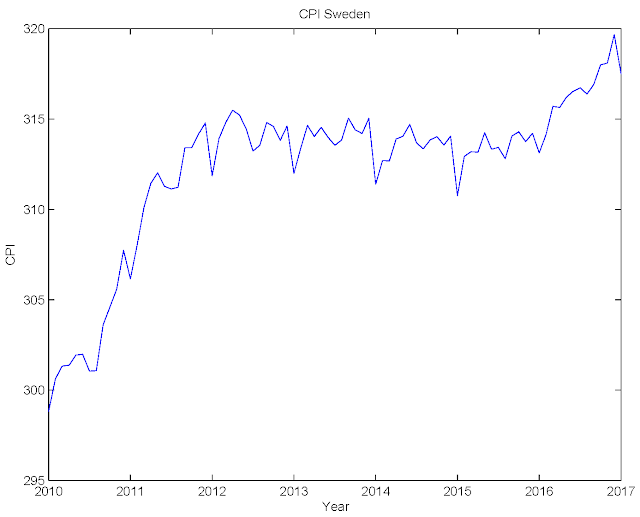 Sweden had four years of inflation close to zero, but in the last year prices have been increasing, and the current 12-month inflation rate is 1.4%, which is getting much closer to the Riksbank's 2% inflation target. The path - actual, and projected by the Riksbank - for the Riksbank's policy interest rate looks like this: 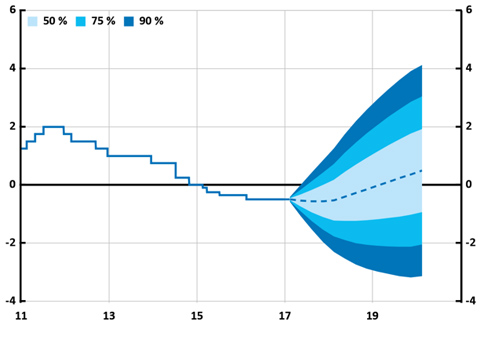 So, the Riksbank's policy rate has been negative for about two years, and it envisions negative rates for the next two years. 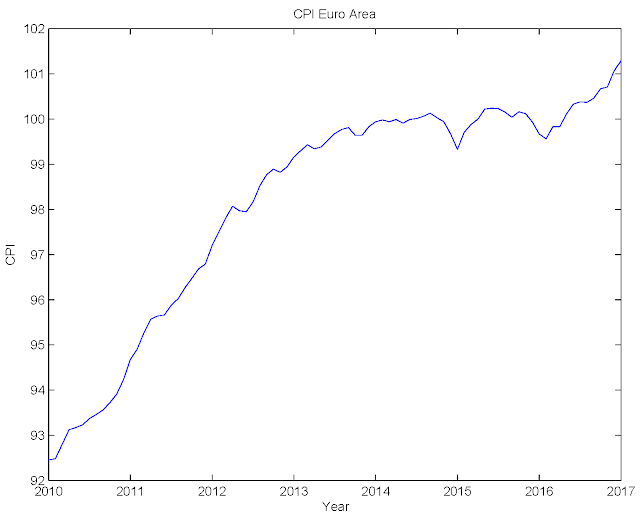 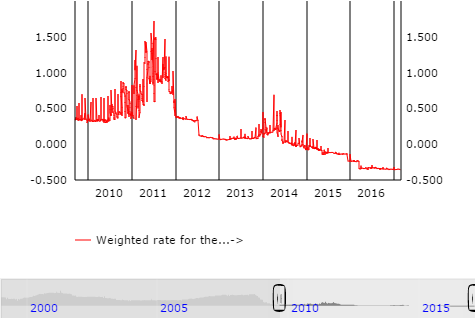 Another instance of increasing inflation is the UK: 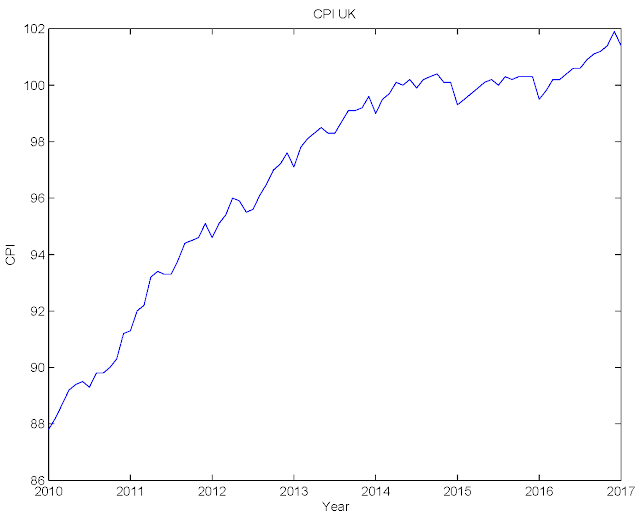 What's the most likely cause of the increase in the inflation rate in these three countries? I don't think we have to look far:

Crude oil prices fell from $100-110 in mid-2014 to about $30 in January 2016, and have since increased to $50-55. While changes in relative prices should not matter in the long run for inflation, a strong regularity is that, in the short run, shocks that cause large relative price movements are reflected in changes in inflation rates. As is well-known, that's particularly the case for crude oil prices, which are highly volatile and tend to move aggregate price indices in the same direction.

The timing certainly seems to suggest that oil price increases are responsible for the increase in inflation in Sweden, the Euro area, and the UK. But, of course, the monetary policies of the Riksbank, the ECB, and the Bank of England were specifically designed to increase inflation. These policies included low or negative nominal interest rate targets and large-scale asset purchases by the central bank. Most of the central bankers involved tend to subscribe to a simple Keynesian story: inflation expectations are fixed (i.e. "anchored"); lower interest rates reduce real rates of interest, which increase spending, output, and employment; inflation increases through a Phillips curve effect. Why can't we always see these effects? True believers might appeal to "long and variable lags" and a "flat Phillips curve." Those are dodges, I think. IS/LM/Phillips curve isn't a helpful framework for thinking about monetary policy if I have to worry about whether it's going to take six weeks or six years for monetary policy to work, or if I need to be concerned whether the Phillips curve is just resting, flat, sloping the wrong way, or deceased.

Further, there are countries in which extreme forms of negative interest rate monetary policy and a large central bank balance sheet don't appear to have moved inflation in the desired direction. One is Switzerland. Here's the Swiss CPI: 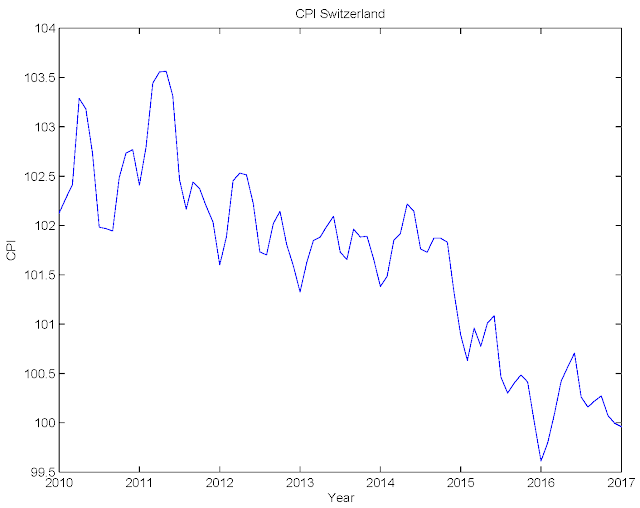 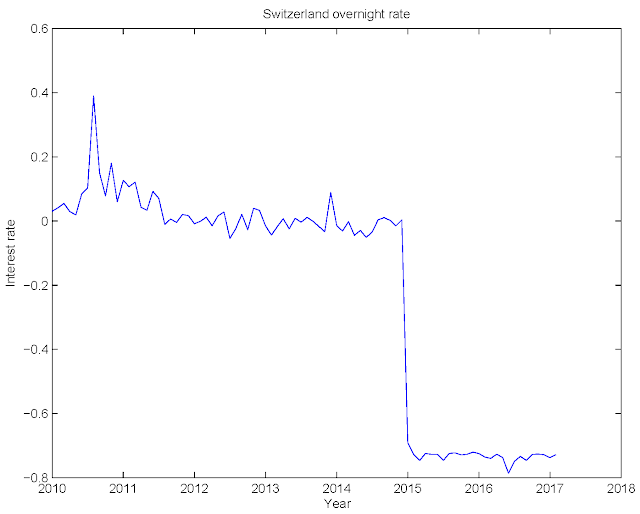 Next, since April 2013 the Bank of Japan has resorted to every trick in the book (massive quantitative easing, low and negative nominal interest rates) to get inflation up to 2%. Here's the result: 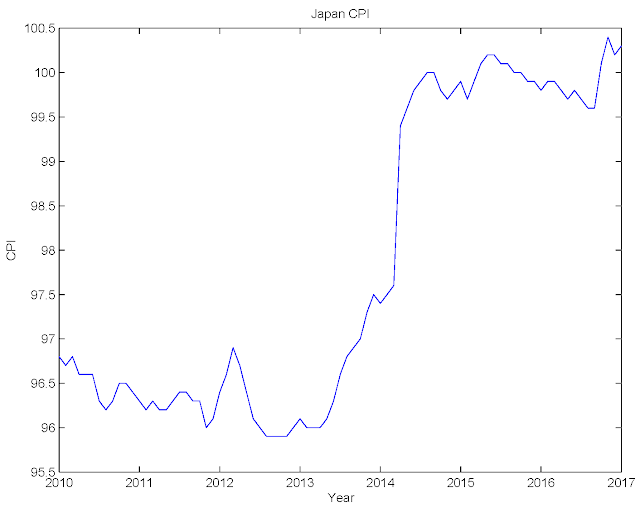 I've told this story before, but it bears repeating. Since the BoJ's easing program began in April 2013, most of the increase in the CPI level has been due to an increase of three percentage points in the consumption tax in April 2014 in Japan. Inflation has averaged about zero for almost three years.

But, even if we recognize the importance of Fisher effects, that will not make inflation control easy. (i) Shocks to the economy - for example large changes in the relative price of crude oil - can push inflation off track. (ii) The long-run real rate of interest is not a constant. As is now widely-recognized, the real rate of return on government debt, particularly in the United States, has trended downward for the last 35 years or so, and shows no signs that it will increase. By Fisherian reasoning, a persistently low real interest rate implies that the short-term nominal interest rate consistent with 2% inflation is much lower than it once was. But what's the best guess for the appropriate nominal interest rate currently, in the United States? Here's the inflation rate, and the 3-month T-bill rate in the United States (I'm using the T-bill rate to avoid questions as to what overnight rate we should be looking at):

So, the Fed's preferred measure of inflation (raw PCE inflation), at 1.9%, is very close to its target of 2%, after two interest rate hikes (in December 2015 and December 2016), which some claimed would reduce inflation and/or push the economy off a cliff. Looking at this same data in another way, subtract the 12-month inflation rate from the 3-month T-bill rate to get a measure of the real interest rate:

So, from mid-2012 to mid-2014, the real interest rate averaged about -1.3%, before oil prices fell. Now that the price of crude oil has again increased somewhat, the real interest rate is back in that ballpark again, with inflation close to the 2% target. So, what would a neo-Fisherian do? (i) There's no good reason to think that oil prices will keep going up, so the effects of the recent oil price increases should dissipate. So, with no change in monetary policy, we might expect a small reduction in the PCE inflation rate. (ii) There's no good reason to anticipate an increase in the long-run real rate of return on government debt, given our knowledge of what makes the real interest rate low (a shortage of safe assets, low average productivity growth). Therefore, a neo-Fisherian inflation-targeting policy maker might want another 1/4 point increase in the fed funds target, but not much more.

Posted by Stephen Williamson at 2:47 PM