The decision making body at the Bank of Canada is the Governing Council, which consists of the Governor, the Senior Deputy Governor, and four Deputy Governors. All of those people are appointed by the Bank's Board of Directors. The Board of Directors, in turn, consists of the Governor, the Senior Deputy Governor, and a group of people appointed by the cabinet of the federal government. The mandate of the Bank as specified in the Bank of Canada Act, is to "promote the economic and financial welfare of Canada." That's of course pretty vague, but since 1991 the Bank has had an explicit inflation target, worked out as an agreement with the Government of Canada. This agreement is reviewed and renewed every five years. Currently, the inflation target is specified as a 2% target for CPI headline inflation, with a range of 1-3%.

Some critical differences between the Bank of Canada and the Fed:

1. The public doesn't know what happens in a Governing Council meeting. There are no minutes or transcripts, and no reported vote. After the meeting, a statement is issued, and at every other meeting there is a press conference.

3. To properly deal with the public in Canada, Bank of Canada officials have to be bilingual. So, when they stand up in public, they'll talk to you in both English and French.

4. The actual mechanics of monetary policy implementation are considerably different. There is an overnight market in which the Bank of Canada intervenes, but there is a small number of participants in this market. As well, the Bank operates in an environment in which overnight reserves are essentially zero. The Bank of Canada never went in for a large balance sheet and large-scale asset purchases after the financial crisis, in contrast to the US, the Euro area, Japan, the UK, etc.

Let's review the state of the Canadian economy. Here's the recent time series for real GDP in Canada, normalized to 100 in first quarter 2007, so that we can compare this to the US: 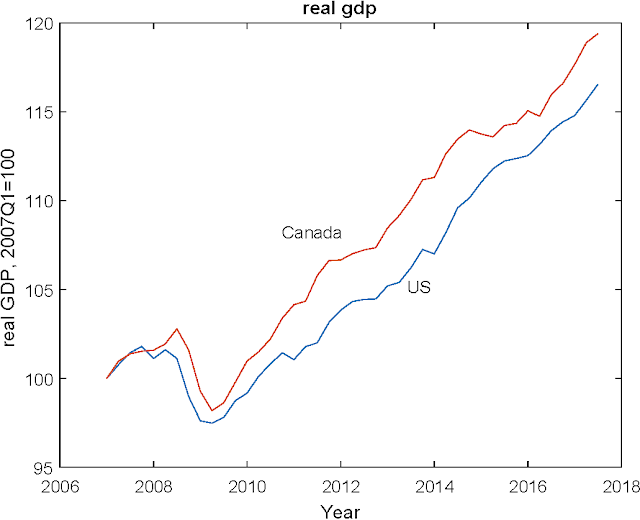 As you may have expected, the behavior of real GDP is not so different in Canada and the US. North America is a highly interconnected economy, given the high volume of trade in goods, services, and assets. However Canada has a somewhat different sectoral composition of output from the US, for example Canada depends more on natural resource industries. That's what the slowdown from 2014-16 is about, which follows the drop in the price of crude oil. But recently, real GDP growth has been strong. Here's what year-over-year growth rates of real GDP look like, since 2010: 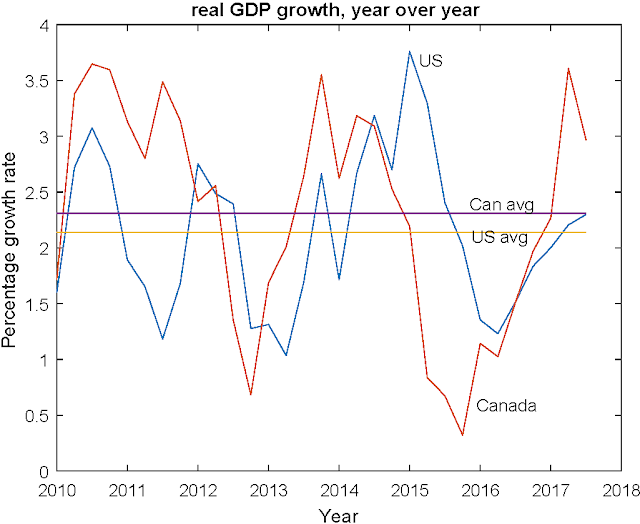 Growth rates are roughly synchronized in Canada and the US, over this period, but you can see somewhat more volatility in Canadian growth rates. As well, the average growth rate over this period is somewhat higher in Canada. Recently, growth has been quite strong in Canada, particularly in the second and third quarters of 2017 (in the 3-3.5% ballpark).

What about the labor market? The unemployment rate looks like this: 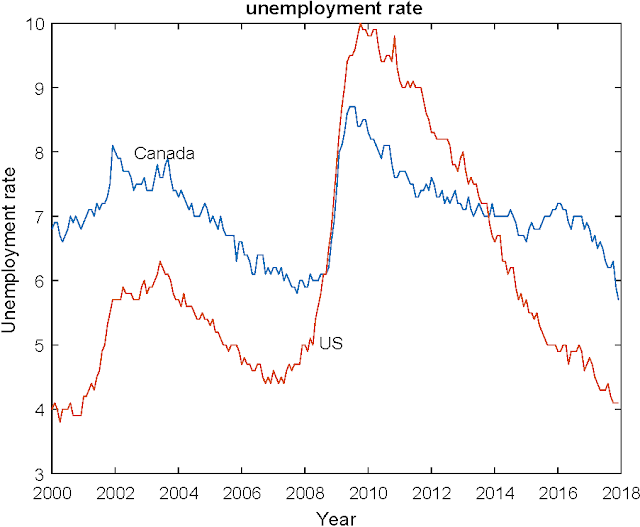 So, the unemployment rate is the lowest it's been for the last 18 years - indicating a tight labor market. We could go deeper into some other labor market variables, for example the participation rate: 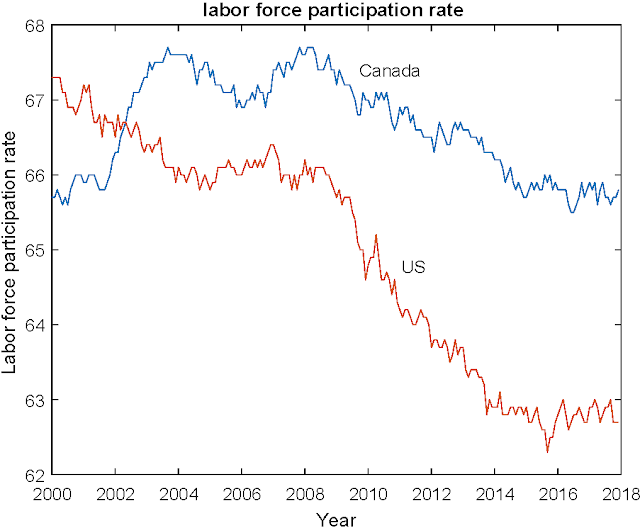 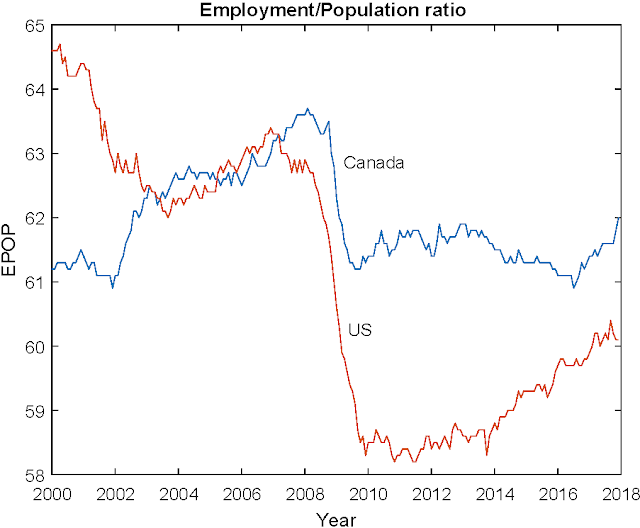 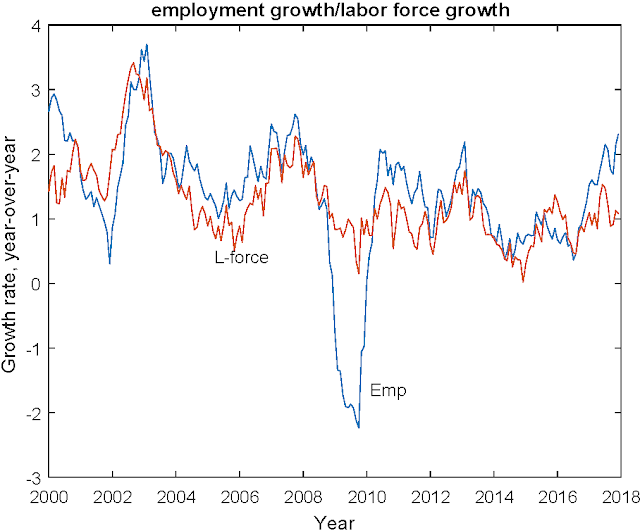 Finally here is how the Bank of Canada is doing with respect to its inflation target: 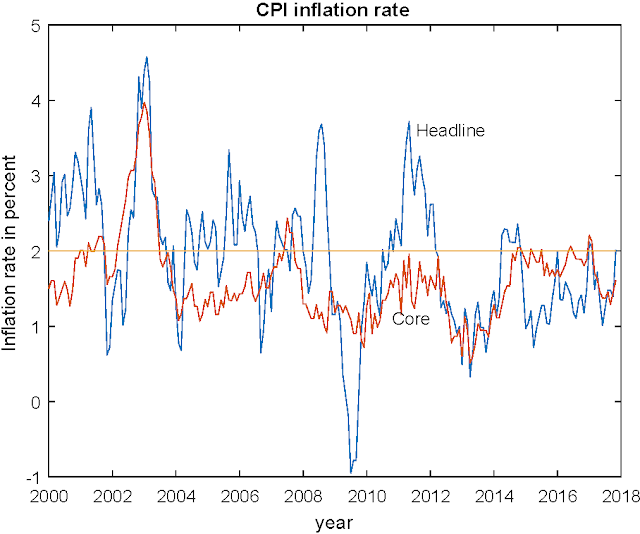 With respect to headline CPI inflation, the Bank of Canada has tended to miss on the low side for the last five years, though inflation is current right at target. I've included a core measure inflation (excluding food and energy prices), but I'm not a big fan of stripping prices out of the index - better to have an idea how persistent the effects of particular shocks are on inflation.

The Bank of Canada increased its policy target twice during 2017. The target for the overnight interest rate went from 0.5% to 0.75% in July and then to 1.00% in August. So what will the Bank do on Wednesday? Given the data I showed you, it looks like the Canadian economy is performing well - somewhat better than the US economy, with relatively strong real GDP growth and employment growth, and a labor market that looks fairly tight. And the Bank is hitting its inflation target. So why should the Bank do anything?

Well, how do Bank of Canada officials look at the world? To figure this out, the press release after the December meeting might help. The two last paragraphs are important, I think:

Inflation has been slightly higher than anticipated and will continue to be boosted in the short term by temporary factors, particularly gasoline prices. Measures of core inflation have edged up in recent months, reflecting the continued absorption of economic slack. Revisions to past quarterly national accounts have resulted in a higher level of GDP. However, this is unlikely to have significant implications for the output gap because the revisions also imply a higher level of potential output. Meanwhile, despite rising employment and participation rates, other indicators point to ongoing­ – albeit diminishing – slack in the labour market.

Based on the outlook for inflation and the evolution of the risks and uncertainties identified in October’s MPR, Governing Council judges that the current stance of monetary policy remains appropriate. While higher interest rates will likely be required over time, Governing Council will continue to be cautious, guided by incoming data in assessing the economy’s sensitivity to interest rates, the evolution of economic capacity, and the dynamics of both wage growth and inflation.

That's certainly Phillips curve language, so the Bank thinks that measures of excess capacity or slack tell us something about where inflation should be going. Here are some such measures that the Bank likes to look at, apparently. Like all Phillips curve believers, Bank officials have to be puzzled by their recent tendency to undershoot their inflation target in the face low unemployment. That's why they think there's still slack in the economy. Like the Fed, people at the Bank of Canada have gone on a slack hunt, looking for labor market variables that might justify a view that the economy is still underperforming. But, the statement above also says that "higher interest rates will be required over time." That is a form of forward guidance, but what's it telling us? The statement doesn't tell us why these higher interest rates might be required, or under what conditions increases might happen.

But, to fill in the gaps, my best guess is that Steve Poloz thinks like Janet Yellen, who believes that interest rate hikes are justified so as to head off higher future inflation. That's a convenient fiction that allows interest rates to go up - otherwise true Phillips-curve-believer central bankers would just get stuck in a policy trap with low nominal interest rates and low inflation forever - everyone turns into Japan, basically. In this instance, a Neo-Fisherian approach might justify another increase. On average, inflation has been below the target somewhat, so another 25 basis points north won't hurt - it'll make inflation go up. The Governing Council, using a get-ahead-of-the-curve approach - basically Phillips curve wakes up and asserts itself - will likely go for the 25 basis point increase in the policy rate, which of course will be self-fulfilling. News since the last meeting has been good in terms of labor market performance for example - the unemployment rate dropped two points - and inflation has gone up. Best guess is that the policy rate goes up tomorrow.
Posted by Stephen Williamson at 1:54 PM