We know that Neo-Fisherism works in our models. In baseline macroeconomic models in which money is neutral, increases in inflation and increases in nominal interest rates go hand-in-hand. If we incorporate standard types of frictions that give rise to monetary non-neutralities in our models, for example New Keynesian sticky prices or segmented markets, an increase in the central bank's nominal interest rate target will in general raise inflation - in the short run and in the long run. See for example Cochrane (2016), Rupert and Sustek (2016), and Williamson (2018). And note that these theoretical predictions don't come from some freakish concoction of a demented neo-Fisherian, but from the mainstream modern macroeconomic models widely used by academics and central bankers.

Standard theory is pessimistic about the ability of a Taylor-rule central banker to successfully control inflation. Given a fixed inflation target, the Taylor-rule central banker can get stuck in a policy trap in which the nominal interest rate is as low as the central banker wants it to go, inflation is lower than the inflation target, and low inflation continues in perpetuity. But apparently real-world central bankers don't follow a rigid Taylor rule. For example, central bankers in the United States and Canada have recently raised their interest rate targets in the face of inflation that was falling below the inflation target. The Fed and the Bank of Canada, in their public statements, have both used what an Incipient Inflation Argument (IIA) in order to extract themselves from the low-inflation policy trap. That is - as they argue - inflation may not be high today, but given a tightening labor market, the Phillips curve will surely reassert itself, and we have to get ahead of the curve. If we don't get ahead of the curve then, as the argument goes, we'll have to tighten at a higher rate later on, with dire consequences.

The IIA allows the central banker to do the right thing - the neo-Fisherian thing, basically - while not abandoning the Phillips curve in some obvious way. To quote yours truly from September 2015:

What are we to conclude? Central banks are not forced to adopt ZIRP [zero interest rate policy], or NIRP (negative interest rate policy). ZIRP and NIRP are choices. And, after 20 years of Japanese experience with ZIRP, and/or familiarity with standard monetary models, we should not be surprised when ZIRP produces low inflation. We should also not be surprised that NIRP produces even lower inflation. Further, experience with QE should make us question whether large scale asset purchases, given ZIRP or NIRP, will produce higher inflation. The world's central bankers may eventually try all other possible options and be left with only two: (i) Embrace ZIRP, but recognize that this means a decrease in the inflation target - zero might be about right; (ii) Come to terms with the possibility that the Phillips curve will never re-assert itself, and there is no way to achieve a 2% inflation target other than having a nominal interest rate target well above zero, on average. To get there from here may require "tightening" in the face of low inflation.

At the time, there was no shortage of opinion to the contrary. As Larry Summers wrote in the Washington Post in August 2015:

The Fed, like most central banks, has operationalized price stability in terms of a 2 percent inflation target. The dominant risk of missing this target is to the downside — a risk that would be exacerbated by tightening policy.

In December 2015, as you may recall, the Fed in fact began tightening in the face of low inflation. Here's what happened: 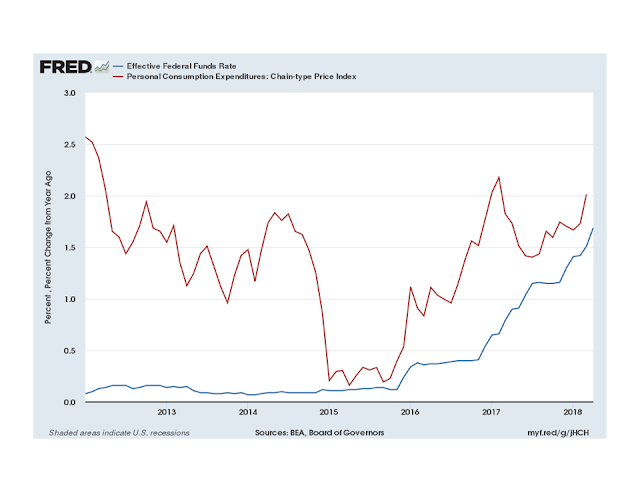 So much for downside risk. It took a while, but raising the Fed's nominal interest rate target coincided with an increase in inflation, to the point where the Fed has now hit its 2% PCE inflation target. So, the Fed's policy moves have been a success, and those who feared that interest rate hikes would take the US economy over a cliff should have calmed down and slept more soundly. After six 25-basis-point increases in the fed funds rate target range, the unemployment rate has fallen from 5.0% to 3.9%.

Should central bankers just declare neo-Fisherism a success, throw away their Phillips curves, and move on? Phillips curves should have of course been thrown out long ago, but we want more evidence to convince people that changing the sign in the policy rule (increasing the nominal interest rate target when inflation is below target) is the right thing to do. The recent US experience is only one episode, and there are many factors other than monetary policy (oil prices, factors affecting the real rate of interest) that affect inflation over the short term and the long term.

What has happened in other countries over this same period (2012 to present)? Here's Canada: 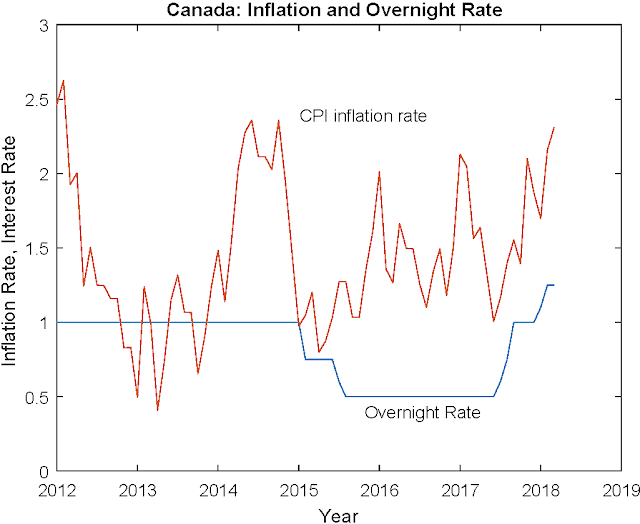 The Bank of Canada has a 2% inflation target, in a range of 1-3%, so as you can see the Bank has not been outside its target range much in the last six years. Average inflation has been below 2%, but the current inflation rate in Canada is currently at 2.3%. In terms of interest rate hikes, the Bank is one behind the Fed, with its target rate at 1.25%, as compared to the ON-RRP rate in the US (the comparable secured overnight rate), which is pegged at 1.5%. The Bank of Canada was one of the first central banks in rich countries to increase its policy rate after the financial crisis, though the interest rate target dropped after the fall in oil prices (associated with a drop in real activity in Canada). Overall, inflation performance in Canada relative to the US is consistent with neo-Fisherism. After the financial crisis, the Bank of Canada didn't set its nominal interest rate target as low for so long as did the Fed, and inflation has been on average somewhat higher in Canada.

In most of the other rich countries in the world, central banks have kept their nominal interest rate targets close to zero or below zero for a considerable time. I've selected five key ones: the European Central Bank, the Bank of England, the Swiss National Bank, the Bank of Japan, and the Swedish Central Bank. Here are the inflation time series (from 2012) in those countries: 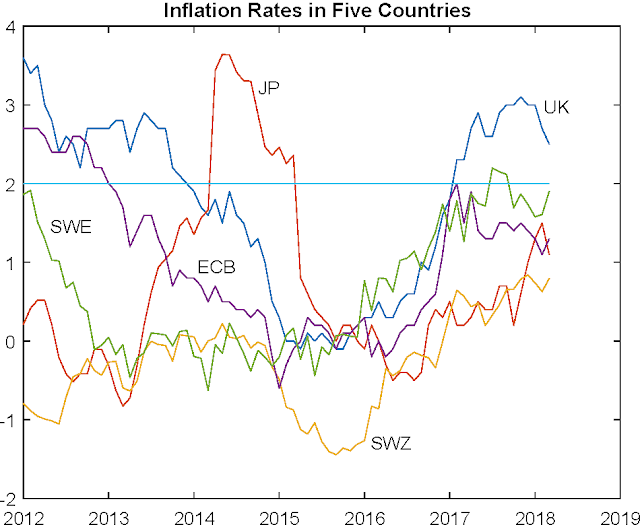 In this picture, the UK stands out as having inflation above the 2% Bank of England inflation target for more than a year. Of course the Pound has also depreciated by about 20% against the US dollar since 2014, for reasons having little to do with monetary policy. In Sweden and the Euro Area, inflation has at times been at the 2% target, though inflation is now softening in those jurisdictions, particularly in the Euro area. Inflation has come up in Switzerland and Japan, but is still well short of 2% in both countries. As well, we could look at a scatter plot of inflation vs. the overnight nominal interest rate in each of the seven countries we have been looking at: 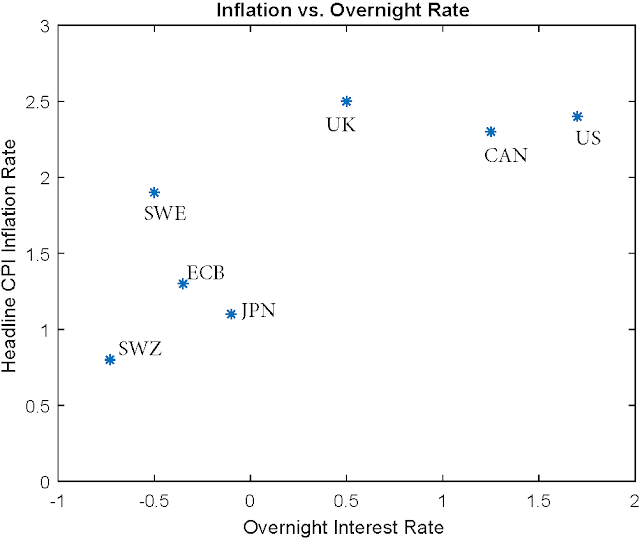 So, that's a nice neo-Fisherian picture. If good labor market performance produces high inflation, why is inflation so much lower in Japan and Switzerland than in Canada? If unconventional monetary policies make inflation go up, why are the countries with the most extreme unconventional policies (negative nominal interest rates, quantitative easing) - Japan, Switzerland, and the Euro area - the ones with the lowest inflation in the picture? Canada, which didn't indulge in any unconventional policies, but has a higher short-term nominal interest rate than all these countries but the US, has an inflation rate of 2.3%. How come? Neo-Fisherite policy works, that's why.

But I think (in part because I've been told) that central bankers are skeptical that they could ever sell a neo-Fisherite monetary policy rule to the public. No one gets excited about higher interest rates, and the average layperson has been conditioned by decades of central banker dialogue about heating the economy up, cooling it down, taking away the punch bowl, etc. It's much easier to swallow higher interest rates if your neighborhood central banker is telling you that this keeps the economy from overheating. We know what happens when things overheat. They break down and explode. In some theories (New Keynesian models, old money surprise models) you can have too much output, but in practice I think this is nonsense. The unemployment rate can't be too low, unless there's some long-run inefficiency at work. The overheating economy is simply part of the IIA argument. That is, a tight labor market is excellent cover for interest rate hikes, which are going to bring inflation up to target. Jim Bullard likes to say: "tighten on good news."

So what's the harm in using the IIA argument, if it's just carrying out the neo-Fisherite program in a more palatable way? First, there are circumstances in which it would be optimal to increase inflation, even if real activity is sub-par. The right thing to do could be to raise the interest rate target, but if the economy isn't "heating up," the IIA argument can't be used. Second, central bankers can run through the story so many times that they believe it. In current circumstances, the risk is that central bankers end up exceeding their inflation targets because of a misunderstanding of the effects of their policies. For example, officials at the Bank of Canada and the Fed think of their current policy settings as "accommodative." From the April 18 Bank of Canada statement:

Inflation is on target and the economy is operating close to potential. That statement alone underscores the considerable progress seen in the economy over the past 12 months. That said, interest rates remain very low relative to historical experience. This is because the economy is not yet able to remain at full capacity on its own.

And from the May 2 FOMC statement:

Policymakers at the Bank of Canada and the Fed think in very similar ways. In both places, policymakers think of policy in terms of a neutral nominal rate of interest (NNRI) which is thought to be in the range of 2.5-3.5%. According to their thinking, if the central bank's nominal interest rate target is less than the neutral rate, this puts upward pressure on the inflation rate and downward pressure on the unemployment rate. So, the ultimate goal is to raise the nominal interest rate to the NNRI, at which point the economy will be operating at potential and inflation will be at its target.

The key problem with this reasoning is that, if the central bank holds the nominal interest rate constant for a long time, policy ceases to be "tight" or "loose." For example, if the Bank of Canada had pegged its interest rate target to 2% in 2009 and kept it there, real economic activity in Canada today would be indistinguishable from what we're seeing. But inflation would be higher. In Canada and the US, nominal interest rates have been low for going on 10 years, and those interest rates are moving up. So the Bank of Canada and the Fed aren't removing accommodation - they're tightening. And tightening means a negative effect on real economic activity and a positive effect on inflation. The Bank of Canada is achieving its goals. The Fed is achieving its goals. Time to stop tightening.
Posted by Stephen Williamson at 6:13 PM