What's jawboning? Well, this Smithsonian Institution piece claims that, in the early part of the Great Depression, Herbert Hoover resorted to jawboning. Specifically,

...he convened a series of “conferences” with business leaders urging them to maintain wages and employment through the months to come.

In the article, it's claimed that:

Hoover’s overriding commitment in all his years in government was to prize cooperation over coercion, and jawboning corporate leaders was part of that commitment.

Jawboning was a practice later on as well. This op-ed in the New York Times in 1978, by Russell Baker is a commentary on the jawboning practices of then-President Jimmy Carter:

Better economists than I are saying President Carter is going to have to start jawboning if he wants to Stop inflation. All very well for a President who can jawbone like a champion, but veteran jawbone writers doubt that Mr. Carter has what it takes.

All you could say after watching the Kennedy performance was, “They don't make jawboners like that any more.” What Caruso was to opera, what Babe Ruth was to bats, Jack Kennedy was to jawboning. By comparison, Jimmy Carter sounded like a hambone the steel tycoons might toss into the soup.

An approach to controlling inflation that involves talking to the people who set price and wages in order to convince them of the errors in their ways might seem odd in a modern context. We all know that it's the central bank's job to control inflation, right? But, that certainly wasn't a widespread view, or even a majority view, in 1978. Here's one of my favorite James Tobin quotes, from this 1980 Brookings paper:

...it is not possible to do the job [disination] without effective wage and price controls of some kind...there could be worse prospects, and probably they include determined but unassisted monetary disinflation.

Here, Tobin's not discussing jawboning, otherwise known as moral suasion, but outright wage and price controls. He's saying you can't bring inflation down ("it is not possible") through monetary policy alone. But Paul Volcker proved Tobin wrong by engineering an unexpectedly rapid disinflation in the United States. That, more than anything I think, convinced everyone that we should make clear that inflation control is a job for the central bank, and to hold central bankers to account if they don't do a good job.

It may come as a surprise to you (and I missed this myself when it first made the news) that Prime Minister Abe of Japan is attempting jawbone-inflation-control.This story from last December indicates that, in contrast to disinflationary jawboning, Abe wants everyone to increase nominal wages at 3% per year, so as to increase inflation. The reasoning seems to be that, if productivity is going up at a rate of 1% per year, then 3% nominal wage growth will cause firms to increase prices at about 2% per year, and the Bank of Japan will then be achieving its inflation target.

Just in case you haven't been following this, the last 22 years or so of inflation in Japan looks like this - relative to the US: 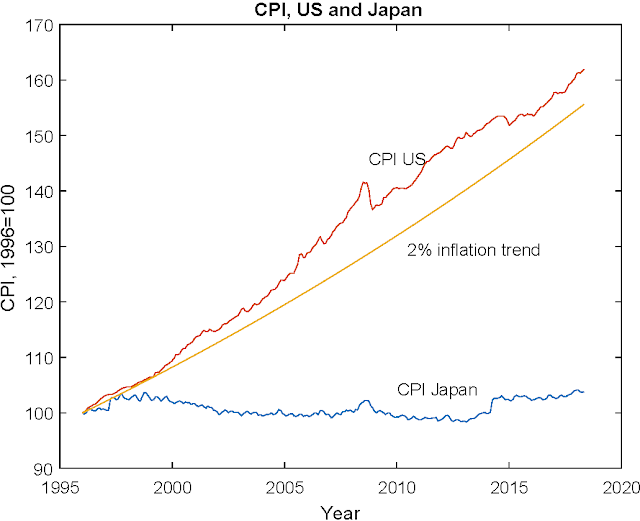 Since early 2013, the Bank of Japan has had an explicit 2% inflation target, and has tried everything that a conventional central banker might try to get inflation to go up - including policies once thought "unconventional." The BOJ has kept short-term interest rates low - even going into negative territory - and has expanded its balance sheet massively through large-scale asset purchases. It has even pegged the 10-year government bond rate to zero. All to no avail, apparently, as the chart shows no sign of a sustained inflation developing. The American experience since 1996 is indeed a mild, sustained inflation, and the CPI path is not far from a 2% inflation path for the whole 22-year period. Surprisingly, the Fed didn't actually have an explicit 2% inflation target until 2012, but I don't think the US inflation performance is an accident. It seems reasonable to infer that the FOMC was implicitly following a 2% target.

So what does Governor Kuroda of the Bank of Japan think of Prime Minister Abe's jawboning? Well apparently he's more than OK with it. Kuroda is quoted as saying:

The government request for 3 percent wage increase is quite appropriate...

Maybe he's just being polite, but the worst interpretation of Kuroda's comments is that he's abandoning responsibility for his inflation target. Maybe he's willing to think that inflation results from a self-sustaining wage-price spiral, and if inflation stays low, and the BOJ falls short of its 2% inflation target, then that's the fault of the people who set the prices and wages. But who knows?

In any case, when central bankers can't do what they claim to be able to do - control inflation - you can see how all hell can break lose. Before we know it, Japan could have wage and price controls, which have a rather sorry history, including the Anti-Inflation Board (1975-1979) in Canada.

Posted by Stephen Williamson at 12:16 PM