In response to my last post, Angelo Melino (University of Toronto) sent me to this post, which informs us that Canadian Tire money might soon meet a sad end.

Now, the experience with Canadian Tire money can tell you something about what the promotors of Bitcoin are up against. As you can see here 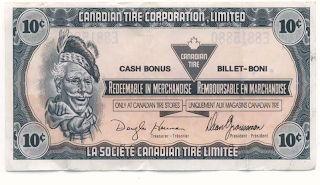 from this 10-cent note, issued, I believe, in the 1980s, Canadian Tire money looks pretty convincing. Canadian Tire has actually gone to some trouble to design the note to avoid counterfeiting. It has a serial number on the back, and a detailed picture on the front of Sandy McTire, the thrifty Scot. Further, as stated on the note, it is redeemable in merchandise (at the Canadian Tire store of course), and to hammer that home, that's stated in both official languages. Thus, Canadian Tire money has Bitcoin beaten on at least two dimensions. It looks something like government-issued currency, which would encourage adoption, and it is a promise to pay something specific on redemption. Further, redemption is not difficult, as essentially any reasonably-sized community in Canada has a Canadian Tire store.

One experiment was carried out by yours truly and Mike Stutzer. Stutzer and I designed the experiment. I supplied the Canadian Tire money from my desk drawer, and Stutzer did the field work. Stutzer took a sailing trip from Duluth Minnesota to Thunder Bay Ontario, and attempted to pass the notes in various Thunder Bay bars. As Mike will attest, he got plenty of laughter, but no beer in exchange for his Canadian Tire money.

Of course the problem may have been that Mike tried to exchange the notes in a manner that was most likely to be met with laughter and no beer, as Stutzer may be one of the funniest people on the planet. Mike is a native of St. Louis Park, Minnesota, in a cohort that included Joel and Ethan Coen, (sons of Edward Coen, one-time professor of economics at the University of Minnesota) and Al Franken. St. Louis Park is in part the subject of A Serious Man, and filming took place there and in other Minneapolis suburbs. What is it about a time and place that makes people funny (or maybe people from St. Louis Park have always been funny)? I don't know.

In any case Canadian Tire money is sadly not what it used to be, and may meet its end. In addition to being issued in smaller quantities, it can no longer be redeemed in gasoline, and seems to be shunned by a younger generation of Canadians. Soon, Canadian Tire money could fade from memory, much like the Diefendollar.
Posted by Stephen Williamson at 12:42 PM