It takes a heap of Harberger triangles to fill an Okun gap.

Gregory Mankiw once discussed gaps versus triangles in the context of fiscal policy issues (the 2009 stimulus package). According to Mankiw, Keynesians think of Harberger triangles as small potatoes, and output gaps as large potatoes; non-Keynesians think the opposite. That's certainly consistent with Paul Krugman's view of the world. Krugman quotes Tobin in his post, and states:

...it’s a more general observation that even bad microeconomic policies, which lead to substantial distortions in the use of resources, have a hard time doing remotely as much damage as a severe economic slump, which doesn’t misallocate resources — it simply wastes them.

What's a Harberger triangle? It's a partial equilibrium measure of the welfare loss from a distortion - a tax or monopoly power for example. Total welfare from the production and consumption of a given good or service can be measured as consumer surplus plus producer surplus, which is the area under the demand curve minus the area under the supply curve, calculated given the quantity traded in the market. Total welfare is maximized at the competitive equilibrium quantity and price, but a proportional tax, for example, reduces the quantity traded, and the welfare loss (when we include the revenue generated from the tax) is a triangle - indeed a Harberger triangle.

In the 1950s, Harberger measured the welfare loss from monopoly in the United States, essentially by adding up these triangles for monopolized industries. He came up with a small number - about 0.1% of GDP. Thus, if we were to use Harberger's methods to add up the heap of Harberger triangles arising from tax distortions, monopoly, various trade restrictions, and other synthetic obstacles to exchange, the welfare loss we obtain should be small.

Right now the U.S. economy is operating something like 6 percent below capacity.

A 6% output gap is what you get if you use the Congressional Budget Office's (CBO's) measure of potential output. The chart shows this measure, along with actual real GDP. Suppose we take the CBO output gap of 6% of GDP as an accurate measure of what could be achieved if the fiscal and monetary authorities in the United States behaved appropriately. Also suppose that 0.1% is a good part of the heap of Harberger triangles in existence in the US economy. Then, indeed, the heap of triangles looks trivial relative to the gap. 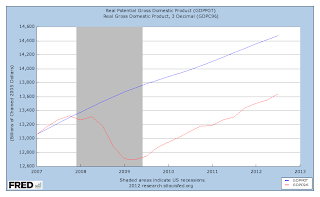 But this isn't as obvious as it might look to some of you. Let's go back to Tobin's article ("How Dead is Keynes?"), where the quote comes from, and try to figure out what he was trying to say. Perhaps surprisingly, he wasn't comparing the welfare cost of business cycles to the welfare costs of "micro" distortions. In his article, Tobin said that 1977 policymakers were between the rock and the hard place. To achieve disinflation would require some sacrifice in terms of lost output. But further monetary accommodation would just lead to self-fulfilling increases in inflation. According to Tobin, "the way out, the only way out, is incomes policy." Then he states:

Most of you will, I'm sure, have no idea what "incomes policy" is, and that's a wonderful thing. "Incomes policy" sounds innocuous. What could be wrong with a government policy that looks after our incomes, presumably making them larger? Well, incomes policy is actually wage and price controls. In the pre-Volcker era, wage-price controls were very much on the table as a means for controlling inflation. Wage and price controls were introduced by the Nixon administration, and were in effect from 1971 to 1974 in the United States. I had the misfortune to live through the era of the Anti-Inflation Board in Canada, 1975-1978. The key achievement of Milton Friedman and the Old Monetarists was to convince everyone that inflation control is the job of the central bank. It's hard to find anyone today who disagrees with that view, and I think that's a good.

The funny, and I think key, point comes out of Tobin's confusion about gaps and triangles. Relative to what he's discussing, the gap and the triangles are actually exactly the same thing. Early in his paper, Tobin discusses the "central propositions" of Keynes's General Theory. To start:

If I were a hardcore Keynesian - New, Old, whatever - how would I measure the costs of business cycles? Well, to start, I would accept Tobin's first central proposition from the General Theory. Inefficiencies arise because wages and prices are misaligned. To calculate welfare losses I would add up Harberger triangles across markets. The inefficiencies that arise in New Keynesian models are indeed identical to the ones which would be generated by a set of good-specific taxes.

What's the conclusion? Keynesians - Paul Krugman in particular - can't have it both ways. Macro does not "trump" micro. This is a no-trump world. If I argue that Keynesian sticky wage/price distortions are large, and that tax distortions are small, that's a contradiction.

But it's not a contradiction to say that sticky wage/price distortions are small, and other inefficiencies that we face are large. Is 6% of GDP a serious measure of the current effects of sticky wage/price distortions? Of course not. Read this document and see if you think the CBO measures potential output the way any sensible macroeconomist would measure it. Yikes. I don't think so.

There are of course plenty of models around now that take wage and price stickiness seriously, and also contain a multitude of shocks that allow those models to fit the data. Christiano/Eichenbaum/Evans is one of those. It seems straightforward to take a model like that, turn off the wage/price rigidity, compare business cycles without the wage/price rigidity to those with it, and ask what the agents in the model would pay to live without the wage-price rigidity (this is with monetary and fiscal policies that are not correcting the inefficiencies). I don't know if that has ever been done.

We could think of such an experiment as giving us an upper bound on the welfare loss from wage/price rigidity. There are plenty of reasons to think that standard New Keynesian models exaggerate the effects of wage/price stickiness. For example, Calvo pricing is suspect. If the losses from wage/price rigidity are such a big deal, there are large surpluses left on the table that inventive buyers and sellers of labor, goods, and services, would be happy to have.

So, there are good reasons to think that the welfare losses from wage/price rigidity are small. There is also plenty of evidence that other inefficiencies matter a great deal. This paper by Hsieh and Klenow shows how the misallocation of resources in China and India is a big deal - for aggregate TFP (total factor productivity) and GDP. There is an upcoming special issue of the Review of Economic Dynamics on misallocation and productivity. This includes a paper by Greenwood, Sanchez, and Wang, showing that financial misallocation can be big-time. In the United States, we have experienced a decade where resources were apparently reallocated, inefficiently, to the housing and mortgage markets, with disastrous results. We understand more about that episode than we used to, but we have a lot to learn. What people should come to terms with, is that wage and price rigidity likely had little to do with that experience, and the sooner economists recognize that, the more progress we'll make.


Posted by Stephen Williamson at 7:33 PM