Since an FOMC meeting is coming up next week, and we have some more information on prices, it would be useful to review the current situation. In the first chart, I plot some price indexes, i.e. PCE deflator, headline CPI, and core CPI, relative to a 2% trend (the more-or-less explicit Fed inflation target) starting at the NBER-dated onset of the recent recession in December 2007. The inflation situation, by this measure, is not dire. Currently the PCE deflator is 1% below the 2% trend, headline CPI is 0.6% lower, and core CPI is 1.6% lower. 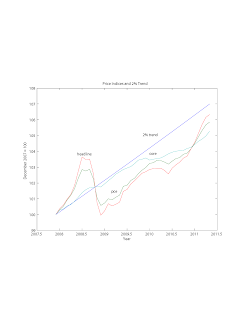 However, the recent history from mid-2010 is troubling. The Fed should clearly be concerned with the first derivative here, and the last CPI report should tell even those die-hard core-CPI-adherents (e.g. Dave Altig) that the inflation we are seeing may not be just some temporary relative-price phenomenon. In case you hadn't noticed, seasonally adjusted core cpi increased by 0.3% in May, and headline inflation increased by 0.2% in spite of a decrease in gasoline prices. Inflation is indeed a monetary phenomenon, and monetary policy is primarily about controlling inflation, though some of our pseudo-macroeconomist blogosphere types seem to think otherwise.

Now, suppose we look at how some monetary measures have been behaving, over the same sample as for the price indexes we looked at in the first chart. In the second chart, I show monthly seasonally adjusted M1, M2, and the currency component of M1, all from the beginning of the recent recession. I have also shown a 5% trend, the notion being that, if velocity were constant, if real GDP were growing at 3% per year, and if prices were growing at 2% per year, then money would grow at a 5% annual rate. 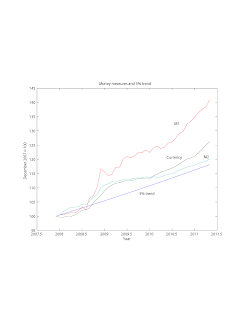 Clearly, M1 stands out here, in that it is currently 19.3% above the 5% trend, with currency 6.8% higher and M2 1.7% higher. Now, on the one hand we have to adjust for a financial crisis effect here, i.e. an increase in the demand for liquid assets due to the financial crisis, including an increase in the demand for US currency in the world at large. On the other hand, some of that demand has gone away, and ultimately we expect it to disappear. Further, it's possible we are too optimistic in expecting that we will soon, or ever, return to a 3% real GDP growth trend.

Therefore, if we are Old Monetarists, New Monetarists, or just sensible macroeconomists who understand that the Fed ultimately controls inflation by controlling growth in Fed liabilities used in exchange, we have to be worried if the Fed does not move to tighten. Barring some game-changing information, that tightening should at least happen by early fall.

In the current context, monetary policy should not be about futile attempts to manage the labor market. As I discussed here, it's best to view QE2 as irrelevant, in which case the fact that this asset purchase program concludes at the end of this month is also irrelevant. Even if we think that there are significant nonneutralities from monetary tightening, gradual increases in the interest rate on reserves in this context are certainly preferable to a large, quick tightening, which would entail potentially greater sacrifice.
Posted by Stephen Williamson at 7:39 AM