Minutes for the last FOMC meeting are posted here. There are some interesting things here. The first is a discussion of how the FOMC might make its communications with the public even more complicated and confusing than they already are:

A staff presentation provided an overview of an exercise that explored individual participants' views on appropriate monetary policy responses under alternative economic scenarios. Committee participants discussed the potential value and drawbacks of this type of exercise for both internal deliberations and external communications about monetary policy. Possible benefits include helping to clarify the factors that individual participants judge most important in forming their views about the economic outlook and their assessments of appropriate monetary policy. Two potential limitations of this approach are that the scenario descriptions must by necessity be incomplete, and the practical range of scenarios that can be examined may be insufficient to be informative, given the degree of uncertainty surrounding possible outcomes. Some participants stated that exercises using alternative scenarios, with appropriate adjustments, could potentially be helpful for internal deliberations and, thus, should be explored further. However, no decision was made at this meeting regarding future exercises along these lines.

Once the alternative scenarios have been laid out, each FOMC participant would presumably put his or her research staff to work evaluating what an optimal monetary policy response would be under each. Then we somehow aggregate this information and report it. Could this exercise actually be helpful? I doubt it, and apparently most of the committee seems to feel the same way.

Here's something I did not know:

With Mr. Lacker dissenting, the Committee agreed to extend the reciprocal currency (swap) arrangements with the Bank of Canada and the Banco de México for an additional year beginning in mid-December 2012; these arrangements are associated with the Federal Reserve's participation in the North American Framework Agreement of 1994. The arrangement with the Bank of Canada allows for cumulative drawings of up to $2 billion equivalent, and the arrangement with the Banco de México allows for cumulative drawings of up to $3 billion equivalent. The vote to renew the System's participation in these swap arrangements was taken at this meeting because a provision in the Framework Agreement requires each party to provide six months' prior notice of an intention to terminate its participation. Mr. Lacker dissented because of his opposition, as indicated at the January meeting, to foreign exchange market intervention by the Federal Reserve, which such swap arrangements might facilitate, and because of his opposition to direct lending to foreign central banks.

There is a special "North American Framework Agreement of 1994," governing swap arrangements with among North American central banks? What exactly did the signatories to this agreement have in mind? Have any swaps actually occurred under the agreement? Why does Lacker even care enough to dissent?

While almost all of the members agreed that the change in the outlook over the intermeeting period was insufficient to warrant an adjustment to the Committee's forward guidance, particularly given the uncertainty surrounding economic forecasts, it was noted that the forward guidance is conditional on economic developments and that the date given in the statement would be subject to revision should there be a significant change in the economic outlook.

This makes it clear, in line with what Fed officials have been telling us, that the forward guidance in the FOMC statement ("...likely to warrant exceptionally low levels for the federal funds rate at least through late 2014.") can change. It is not a commitment. The interpretation is that, if the Fed's forecast changes, so will its forward guidance. Then, if we want to understand the Fed's policy rule, we need to have a view on what the Fed's forecast means. Is it objective, or just wishful thinking? What exactly will the Fed do if it gets a surprise? How much will the forward guidance change, and in response to what? How is the current forward guidance language somehow superior to the old language ("...low levels for the federal funds rate for an extended period.")?

FOMC members still believe that they have plenty of tools at their disposal:

The Committee also stated that it will regularly review the size and composition of its securities holdings and is prepared to adjust those holdings as appropriate to promote a stronger economic recovery in a context of price stability. Several members indicated that additional monetary policy accommodation could be necessary if the economic recovery lost momentum or the downside risks to the forecast became great enough.

To my dismay, these folks are convinced that quantitative easing actually does something. With the stock market going south, Europe in disarray, and a little less inflation, look for more QE at the next meeting, June 19-20.
Posted by Stephen Williamson at 2:48 PM 23 comments:

Two reactions to this piece by Paul Krugman:

1. If Krugman believes that disinflation is "incredibly expensive," then he should be more wary of exploiting the Phillips curve tradeoff that he imagines exists.

2. Krugman should do some research on the debate about disinflation that occurred circa 1980. At the time, various "gradualists" thought that the sacrifice that would have to be made in reducing inflation would be very much larger than it actually turned out to be. People like Tom Sargent (see "The Ends of Four Big Inflations" and this paper) had a better grip on what was going on than the adaptive expectationistas.
Posted by Stephen Williamson at 8:04 PM 17 comments: 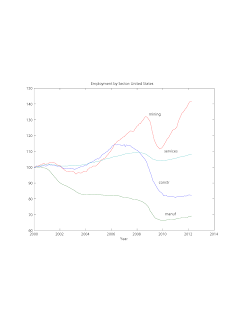 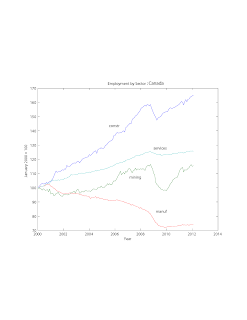 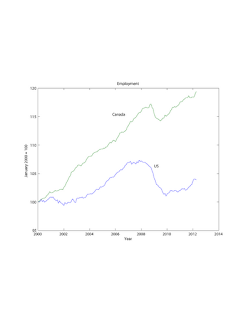 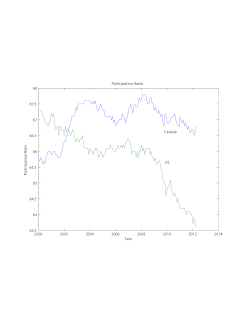 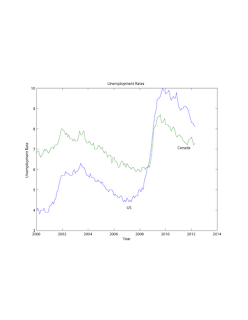 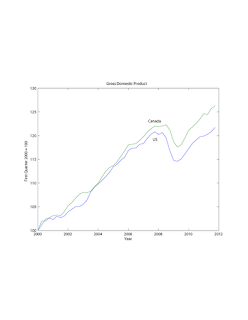 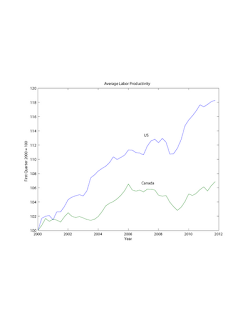 Before the financial crisis, some of us liked to pay attention to financial factors, credit, banking, monetary economics, etc. Now we all know that those things are important, right? If you think about them, you can indeed begin to make sense out of the data above. The Canadian financial system essentially sailed through the financial crisis unscathed, save for a few bruises perhaps. The problems in US mortgage markets, which acted to foul up financial exchange and credit in general, are reflected in the performance of the US construction sector, and in US labor market performance, in ways that we have not yet been able to successfully quantify. There may be inefficiencies associated with these phenomena that can be corrected through the better design of fiscal and monetary policies, but it is far from obvious what the inefficiencies are, or what the correct policies are. Anyone who tells you they are sure of the answers is fooling themselves, or fooling you.
Posted by Stephen Williamson at 7:41 PM 26 comments: