Thomas Piketty, author of Capital in the Twenty-First Century has declined a nomination to the French Legion of Honor. The Legion of Honor is a big deal. It's described as an "order," and was founded in 1802 by Napoleon. The structure of the order is rather militaristic (no surprise). It has ranks, medals, and elaborate rules. This from Wikipedia:

Here's the list of recipients. I scanned it, and it's quite a cross-section of humanity, including Desmond Tutu, Kristin Scott-Thomas, Ravi Shankar, Louis Pasteur, Sharon Stone, Alexis de Tocqeville, Paul McCartney and Jerry Lewis (a bastion of French culture, in case you didn't know). Who would not want to keep company with Ravi Shankar, Desmond Tutu, and Kristin Scott-Thomas? Piketty, apparently. And it's not like he didn't have good contemporary company. His fellow nominees were Jean Tirole (Economics Nobel Prize 2014) and Patrick Modiano (Nobel Prize for Literature 2013). So, what's Piketty's problem? He's quoted (in translation) as follows:

I just found out that I had been proposed for the Legion of Honor. I reject this appointment and I do not think it is the role of government to decide who is honorable. It would be better that it be devoted to recovery growth in France and in Europe.

Now I'm really confused. I got the idea - perhaps mistaken - from Capital in the Twenty-First Century, that Piketty viewed unfettered market outcomes as seriously deficient. Society could be destroyed as the result of capitalism run wild, or some such. Is he now telling us that there is a market for honor? If you want a reward for your good deeds, you should write your own 700-page tome, and see if it meets the market test, perhaps? Maybe he has found religion, and thinks that honor is found in heaven. Inquiring minds want to know.

My suggestion is that we run an experiment. Anyone with any power to decide such things should nominate Piketty for their award, and we'll see which ones he takes, if any. I would be happy to put him up for the Hillcrest Neighborhood Holiday Season Light Display Award. I'll have to convince the neighborhood association to waive the usual rules, but that could fly.
Posted by Stephen Williamson at 10:30 AM 14 comments:

Paul Krugman has an interesting perspective on the history of economic thought. According to him, the Volcker disinflation played out exactly as Keynesians thought it would. Cutting to the chase:

So were Keynesian economists feeling amazed and dismayed by the events of the 1980s? On the contrary, they were feeling pretty smug: disinflation had played out exactly the way the models in their textbooks said it should.

That's not the way I remember it. But maybe my memory is bad, so I thought I would do some research to check out these claims. We'll set the wayback machine for 1978, when Arthur Okun wrote "Efficient Disinflationary Policies." Okun set out to obtain a good measure of the costs of disinflation, and consulted what he thought were some of the best minds in the profession at the time: 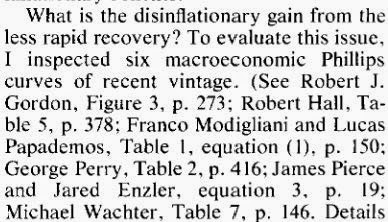 You should recognize at least some of the names of these estimators-of-Phillips-curves. Some of them are still big shots. What was the conclusion from that work? 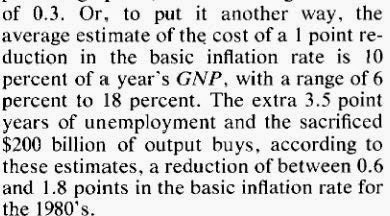 So, if we look only at the 1981-82 recession which, according to the NBER, is defined by a peak in 1981Q3 and a trough in 1982Q4, the drop in the quarterly PCE deflator was about 3.6%, or an average of 2.9% per year. By Okun's estimate, this should have resulted in a 29% drop in GDP per year. What actually occurred was a drop in real GDP during the recession of about 2.5%, or an average of about 2% per year. If Okun was feeling pretty smug [infeasible actually (see the first comment below), but imagine he were still alive then] about all this by the mid-1980s, I'm not sure why, given that he was off by an order of magnitude.

There's more to Okun's "Efficient Disinflationary Policies." After coming to the conclusion that using conventional policy to address the inflation problem would be too costly, he suggested how we could do that in a more efficient manner, by using "the direct influence of public policy on costs." What he appeared to have in mind were subsidies to firms - subsidies lower costs, which lower prices, so there would be less inflation, he reasoned. Obviously Okun's idea was not highly influential. Around the same time (this is from 1977), you would find James Tobin in roughly the same ballpark. Like Okun, Tobin ponders the costs of disinflation, and judges that they are just too high if conventional means are used. He says, "the way out, the only way out, is incomes policy," and concludes:

For the uninitiated, "incomes policy" means wage and price controls. Tobin is saying that the cost of using wage and price controls to control inflation is small, with the welfare distortions measured by "Harberger triangles," but the cost of using conventional policy to control inflation is a potentially very large output gap. As with Okun's policy recommendation, Tobin's went by the wayside.

So, now we know how some of the established macroeconomic big shots of 1978 were thinking. What about the upstarts? In early 1981 (the dates on the working papers are May 1981) Tom Sargent wrote a couple of papers which address directly the costs of disinflation, and how we should think about the policy problem. These are "The Ends of Four Big Inflations," and "Stopping Moderate Inflations: The Methods of Poincare and Thatcher." In "Four Big Inflations," he tells us about the consensus view of deflation at the time - i.e. the view of Okun and Tobin as outlined above:

Further, he supports that in a footnote:

Then, Sargent describes an alternative view: 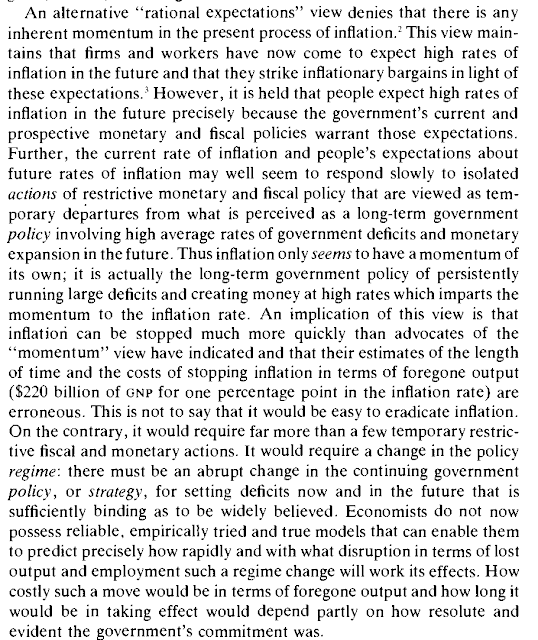 While much of Okun's and Tobin's papers referenced above read like a foreign language now, I think most people will find that paragraph of Sargent's very familiar. Today, I don't think many people would find it objectionable, but at the time this sort of thinking was getting serious pushback from some big shots. Sargent quotes one of them in a footnote:

In contrast to Okun, who is quite pleased to supply an estimate of the cost of disinflation, in terms of lost GDP, Sargent doesn't think he has a serious model that he can take off the shelf to address the quantitative implications of disinflation. But, his two papers provide nice historical examples of disinflations (in some cases the ends of hyperinflations) that are quick, and that seem to conform to his ideas.

So, who were the winners and losers from this episode? Probably that's the wrong question to be asking. When science progresses, we all win. Science does not progress when individual scientists see it as a loss if their ideas are superseded, and try to prevent that loss from happening by denigrating new ideas. Careful re-examination of the Volcker disinflation might lead to the conclusion that Volcker should have done something different, but I think the consensus view among economists is that the Volcker disinflation was necessary, and whatever output was lost in the process was outweighed by the benefits of low inflation that we have enjoyed for the last 30 years. The idea that we should control inflation through tax/subsidy policy or wage/price controls gets no traction in the 21st century. It's now widely accepted that inflation control is the province of central banks, though we owe that principally to the Old Monetarists rather than the 1970s macro revolutionaries. But those revolutionaries gave us much of the framework we now use for addressing monetary policy problems: (i) we want to think in terms of policy regimes rather than policy actions; (ii) commitment is important; (iii) well-understood policy rules are important; (iv) people are forward-looking. All of those ideas are now common currency in central banking circles. People who succeeded as macroeconomists in the post-1980 world absorbed the ideas of Sargent and his contemporaries and worked with them - you can certainly see that in Woodford's work, for example.

Are these long-gone controversies which have no relevance for current policy issues? Certainly not. In the messy world of monetary policy-making, we can still find people who want to think about monetary policy in terms of actions rather than state-contingent policy rules, or who want to base policy decisions on things akin to an estimate of the slope of the Phillips curve. People with the resolve of Paul Volcker are unusual, and institutional commitment can be difficult when there are many people with disparate ideas weighing in on a policy decision.

One way to think about the history of macroeconomic thought is as a series of battles. These people thought x, those people thought y. There was a fight between x and y, and y won. Then z came along, tried to beat up y, but y kicked z's butt, etc. That may sound very exciting - people find stories about personal animosity intriguing. But the reality is perhaps not so exciting. We have a set of ideas that we currently find useful, some of which we can trace directly to x, y, and z. Other ideas have morphed in various ways through the work of many people, and through public discussion, so that it's hard to give credit to some unique originator. And we're all "rational expectationists" now. Perhaps it's best to remember Samuelson for the positive things he gave us - the Foundations of Economic Analysis, the overlapping generations model, for example - rather than his carping about "rational expectationists." As well, if you want to know what people really think, look at what they do, not what they say. For example, when Paul Krugman wants a

... core insight that changed ...[his] ... mind about monetary policy in a liquidity trap (and is useful for fiscal policy too),

what does he do? He takes a Lucas cash-in-advance model off the shelf - a model with forward-looking optimizing economic agents having rational expectations - and uses it to learn something. He's a rational expectationist too!
Posted by Stephen Williamson at 1:19 PM 21 comments: