As background for this piece, you can read this forthcoming St. Louis Fed Review article,
"Inflation Control: Do Central Bankers Have It Right?" and/or the accompanying slides from a presentation for the Australasian Macroeconomics Society in Canberra, August 2017. The paper gathers together informal stuff I have written on so-called Neo-Fisherism and monetary policy.

Conventional central banking inflation control is typically driven by Phillips curve (PC) theory. Roughly, PC theory says that current inflation increases as the difference between some measure of actual aggregate economic activity and some measure of potential economic activity decreases, and increases as some measure of anticipated inflation increases. I've never seen a central bank policy statement that didn't contain some explicit or implicit reference to the PC. For example, from the Bank of Canada's press release on September 6:

While inflation remains below the 2 per cent target, it has evolved largely as expected in July. There has been a slight increase in both total CPI and the Bank’s core measures of inflation, consistent with the dissipating negative impact of temporary price shocks and the absorption of economic slack. Nonetheless, there remains some excess capacity in Canada’s labour market, and wage and price pressures are still more subdued than historical relationships would suggest, as observed in some other advanced economies.

So, the Bank tells us that inflation is currently below its 2% target, but is expected to come back to target as "excess capacity" goes away - basically a PC mechanism.

In the old days, Lucas developed a theory of the Phillips curve, the upshot being that, as emphasized in the Lucas critique paper, policymakers should not be using observed PC relationships to guide policy, as such relationships are not structural. Indeed, the theory tells us that PC correlations could be positive or negative, and the slope of the PC curve depends on the policy regime in place. In more recent times, PC theory re-emerged in the New Keynesian (NK literature), but if we take NK models seriously, they give us more reasons to doubt the invariance of PC parameters to changes in policy rules (e.g. wage and price setting should change with policy).

In addition to theoretical concerns, the incoming data has not been kind to PC adherents. Lael Brainard, in her September 5 speech to the Economic Club of New York, recognizes this:

...what is troubling is five straight years in which inflation fell short of our target despite a sharp improvement in resource utilization.

If anything, this understates the case. Here's a plot of year-over-year headline PCE inflation vs. the difference between the unemployment rate and the CBO's measure of the natural rate of unemployment: 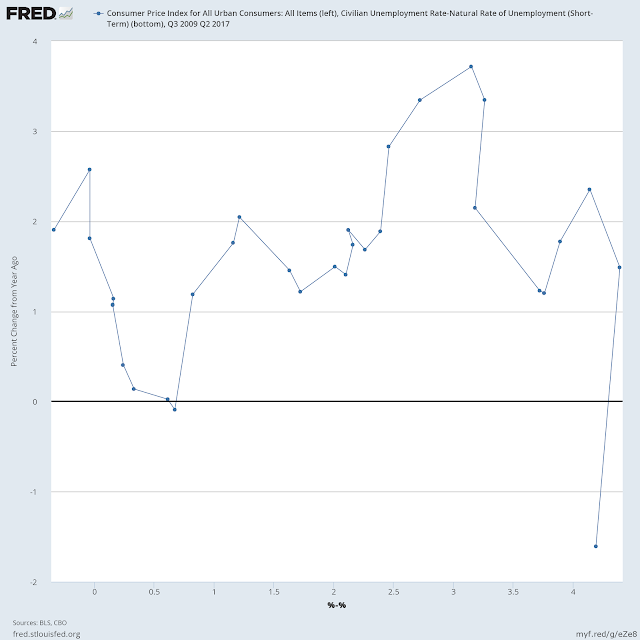 In the chart, the line connects post-recession quarterly observations, from right to left. That's certainly not tracing out a nice PC. More often than not, inflation and unemployment were actually moving in the same direction. And, in case you're thinking the most recent observations look more promising for the PC, consider the PCE deflator data, in levels:

In this chart, you can see a noticable recent reduction in inflation. Year-over-year, the inflation rate is 1.4%, and the average inflation rate since the beginning of 2017 is about zero. Consistent with what Brainard says, it appears the labor market is unusually tight. The unemployment rate is 4.4%, and the CBO claims that the natural rate of unemployment is 4.7%. If you really believe in PCs, that might make you think. Brainard says this is "troubling," which I guess means that the PC is in trouble, policymakers are in trouble, we are all in trouble, or some convex combination of the three.

As Brainard explains, if one has a PC view of the world, it's going to be hard to understand why inflation is so low. But she's going to give it a try:

In many of the models economists use to analyze inflation, a key feature is "underlying," or trend, inflation, which is believed to anchor the rate of inflation over a fairly long horizon. Underlying inflation can be thought of as the slow-moving trend that exerts a strong pull on wage and price setting and is often viewed as related to some notion of longer-run inflation expectations.

This makes is sound like this "underlying inflation" thing resides in most of the models that macroeconomists work with. While some (most?) undergraduates are taught some version of IS/LM/PC with exogenous inflation expectations, no monetary economist I know tries to analyze inflation in a model with exogenous "underlying or trend" inflation. And that's certainly not a feature of typical NK models, except versions with sticky expectations. But trend inflation is indeed a variable in the Board's FRB/US model, if you have the patience to wade through the documentation. Indeed, essentially everything important in FRB/US (real GDP for example) ultimately reverts to some exogenous trend. Board governors and Board economists have certainly been known to treat FRB/US very seriously, so it's not surprising that Brainard is like-minded.

Do we think inflation expectations have fallen? Perhaps the best we can do is to rely on market-based measures, for example the 10-year breakeven rate (nominal 10-year Treasury yield minus 10-year TIPS yield) looks like this:

The most recent observation is about 1.8%, which is certainly lower than the 2.2%-2.7% we typically observed before the financial crisis, but 1.8% is not all that low. Accounting for the fact that TIPS are indexed to the CPI (rather than the PCE), and adjusting for risk and other factors, this might perhaps translate to an anticipated PCE inflation rate of 1.5% or thereabouts for the next 10 years. If people are actually anticipating 1.5% inflation, that would seem to call for a modest adjustment of some sort in monetary policy, as the clear intent of the Fed is that people should anticipate 2% inflation forever, and be pretty sure about it.

But what sort of policy adjustment are we talking about? Is inflation too low because the Fed has been doing a bad job? Brainard says no. According to her, the problem is that the Fed has been constrained.

[An] explanation may be the greater proximity of the federal funds rate to its effective lower bound due to a lower neutral rate of interest. By constraining the amount of policy space available to offset adverse developments using our more effective conventional tools, the low neutral rate could increase the likely frequency of periods of below-trend inflation. In short, frequent or extended periods of low inflation run the risk of pulling down private-sector inflation expectations.

What's Brainard saying? First, the real rate of return on safe assets is low. For example, here's the fed funds rate minus the 12-month inflation rate - a proxy for what we're interested in:

By this crude measure, the real rate of return on overnight fed funds averaged -1.20% post-recession, and the most recent observation is -0.25%. But Brainard doesn't make reference to the actual real interest rate. She has another animal in mind - the "neutral rate of interest." What's that? Central-bank-speak, basically. Start with a standard Taylor rule, for example,

So, given the Fed's inflation target of 2%, if r* is lower, as is consistent with what we can see in the last chart, this means that the neutral rate of interest is also lower. If r* is low, we should observe a low nominal interest rate target, on average, with the Fed responding to random shocks and missing its ultimate inflation and output targets on the low and high sides. But, what's a good estimate of r*? For this we need a model. In standard neoclassical growth models with some sort of appended role for monetary exchange, r* is a constant, and in some models it's endogenous, and dependent on monetary policy, among other things. Certainly, if we want to explain what is going on in the last chart, we can't rely on a theory that implies constant r*.

But whatever is driving r*, (a shortage of safe assets for example), we can certainly agree that r* is low. If it's as low as what we see in the last chart, post-recession, then r* = -1.2%, and the fed funds rate is currently well above where it should be. If r* = 0, say, then the current fed funds rate, at about 1.2%, is only 80 basis points below what Brainard would consider neutral. That's certainly not the way the majority of the FOMC thinks about this problem, as you can see from the last submitted projections. Most committee members think the fed funds rate will be above 2% by the end of 2018, and about 3% in the long run. Of course, the FOMC's actual policy interest rate has come in well below its forecasts for some time, and whether the FOMC now knows its own mind remains to be seen. Thus, if the low inflation readings we have seen this year turn out to be transitory, and the FOMC finds reasons, as it has in the past, to forego interest rate increases, things should be just fine (barring some unforeseen disaster, in which case inflation control is out the window anyway).

But, and this is critical, what should the Fed do if inflation continues on the low side or, alternatively, jumps to the high side of 2%? The views of the FOMC are summarized, for the most part, in this sentence from the last FOMC statement:

The stance of monetary policy remains accommodative, thereby supporting some further strengthening in labor market conditions and a sustained return to 2 percent inflation.

Brainard appears to be disagreeing with that view. According to her, the Phillips curve mechanism is inoperative. But what is she recommending?

If, as many forecasters assume, the current shortfall of inflation from our 2 percent objective indeed proves transitory, further gradual increases in the federal funds rate would be warranted, perhaps along the lines of the median projection from the most recent SEP. But, as I noted earlier, I am concerned that the recent low readings for inflation may be driven by depressed underlying inflation, which would imply a more persistent shortfall in inflation from our objective. In that case, it would be prudent to raise the federal funds rate more gradually.

Brainard suffers from Phillips curve confusion, and so does the rest of the FOMC, though in each case it's a different form of the disease. As I summarize in my recent paper, central bankers generally have inflation control wrong. Mainstream macroeconomic theory tells us that a central bank that raises its nominal interest rate target permanently raises the inflation rate - in the short run and in the long run. These models also tell us that a central banker armed with a Taylor rule and following the Taylor principle inevitably falls into a pit of frustration featuring low nominal interest rates and low inflation. That's in accord with the empirical evidence - with adjustments for factors other than monetary policy that matter for inflation and real interest rates. But central bankers aren't really interested in mainstream macroeconomic theory - for some reason they prefer to be led astray by undergraduate IS/LM/PC models. Why? Beats me.