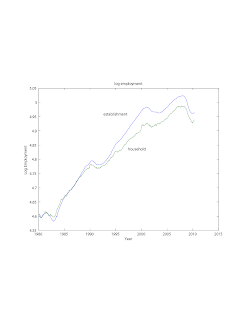 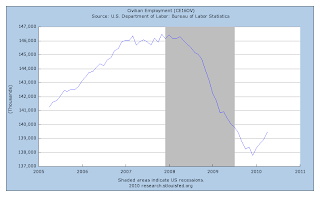 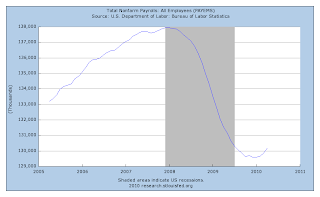 Now, I am not a labor economist, but I understand that there is some notion that the establishment survey number is more trustworthy than the household survey number. However, there are good reasons (and different reasons) to worry about measurement error in both numbers. First, though the establishment number is trustworthy in the sense that it is easy for establishments to report the number of people on their payrolls, the establishment survey misses agriculture and self-employment. Second, though the household survey can have problems due to respondents not understanding what they are being asked, it actually covers everyone.

I don't see any particular reason to discount what I see in the recent household survey numbers, which is reasonably vigorous growth in employment. I'm not sure why people focus solely on the somewhat anemic establishment survey employment numbers. Obviously it makes a big difference if we simply extrapolate based on the recent behavior of establishment employment or household employment. With the working-age population growing at about 1.25% per year, annual growth in employment of 1.3% per year (establishment survey) won't put much of a dent in the employment/population ratio, even over a very long period of time. However, 3.6% employment growth per year (household survey) would get us a long way in a short time.

Consider this. Suppose that the employment population ratio increased from where it is now (58.8%) to its previous peak (about 63%) over a five-year period. This would imply employment growth of about 2.7% per year, which translates into a contribution of the labor input to growth in real GDP of about 2% per year. If we add contributions of about 1% per year from productivity growth and 1% per year from growth in the capital stock, we get 4%, which is well above the average real GDP growth rate of about 3%. The conclusion? Given how highly productive the US economy currently is, it has a huge capacity for growth. The current slack in the labor market is good news, in that we can get a lot of growth just from growth in the aggregate labor input over the next few years. As I commented in this post, I see no reason to see doom and gloom around the corner (aside from Europe's sovereign debt problems).
Posted by Stephen Williamson at 11:56 AM