The April employment report from the BLS seems to have been greeted widely as shockingly bad news. For example, see this story. Here's the key paragraph, which is representative of the viewpoint you will see almost everywhere:

The headline numbers for May suggested reason for optimism — employers added 431,000 jobs and the jobless rate fell to 9.7 percent, from 9.9 percent in April. But the underlying numbers showed that almost all of the growth came from the 411,000 workers hired by the federal government to help with the Census. Most of those jobs will end in a few months.

This is now beginning to look somewhat better for the private sector, but of course private sector employment tends to grow at a high rate in the spring, coming off its low point in January. It's clearly important to account for seasonal variation in some manner. However, let's forget the above numbers for the time being and focus on year-over-year percentage changes in establishment survey employment, and see what that tells us. I have provided the chart. 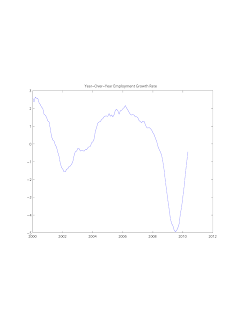 Now, I don't see any reason for pessimism in this picture. Year-over-year employment growth is increasing at a very rapid rate currently, and there is a lot more strength than was the case after the last recession. While government employment has increased 3.3% (April 2009 to April 2010), government employment is currently 17.8% of the total, so most of the strength in the employment picture is coming from the private sector.
Posted by Stephen Williamson at 7:21 AM