Narayana gave a nice speech, posted here, in Marquette, Michigan. I had to look this up on the map - it's in the UP (upper peninsula) of Michigan which, as everyone should know, falls within the 9th Federal Reserve District (Minneapolis).

From our point of view, there are two important issues raised in Kocherlakota's speech, relating to labor markets and the Fed's balance sheet.

Labor Markets
As many have noticed by now, there are important recent anomalies in the behavior of of the US labor market. One way to look at this is in terms of the Beveridge curve relationship, as displayed on Rob Shimer's web page. As Kocherlakota points out:

Beginning in June 2008, this stable [Beveridge curve] relationship began to break down, as the unemployment rate fell much faster than could be rationalized by the fall in the job openings rate. Over the past year, the relationship has completely shattered. The job openings rate has risen by about 20 percent between July 2009 and June 2010. Under this scenario, we would expect unemployment to fall because people find it easier to get jobs. However, the unemployment rate actually went up slightly over this period.

Another way to look at this is to take a standard Mortensen-Pissarides matching function and use that to interpret the data. Suppose that we assume a Cobb-Douglas matching function, with a "share" parameter for unemployment of 0.75, as in Shimer's 2005 AER paper. Following a quick-and-dirty approach, which ignores the not-in-the-labor-force state, various time-aggregation issues, and different units of measurement for the unemployment rate and vacancy rates (all dealt with in Shimer's AER paper, for example), I calculated a "productivity" residual from the assumed matching function and the vacancy/unemployment data for December 2000 to June 2010. Assuming a constant separation rate of 3% per month, I get this picture. 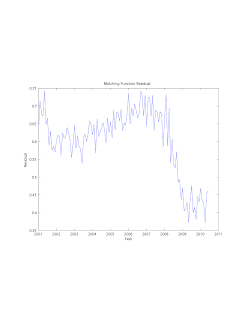 What we get is a measure of matching efficiency in the labor market, analagous to calculating a Solow residual. The picture tells us that, given the same unemployment rate and vacancy rate, the US labor market currently produces about 45% fewer matches of unfilled vacancies with unemployed workers as it did in early 2007.

This is a phenomenal shift and, of course, it would be very useful to understand why this has happened. One possible explanation is that this is just a measurement problem. In terms of matching in the labor market, all we can measure are reports about the number of economic agents who are searching on either side of the market. We do not measure search intensity. One explanation for the current anomalies in the Beveridge curve relationship, and in the chart, could be that firms are posting vacancies but are not very serious about filling them, a view that I have heard attributed to John Haltiwanger (though I haven't verified this).

Alternatively, what we may be seeing in current behavior is an increase in mismatch in the labor market. A plausible story is that the post-2000 housing construction boom in the United States postponed some of the effects of a long-run sectoral shift in resources in the US from low-skill to high-skill occupations. The collapse in the construction industry, along with geographical shifts in production (for example in the auto industry) worked in the other direction to exacerbate the effects of these long-term sectoral shifts. Here is Kocherlakota's take on this:

What does this change in the relationship between job openings and unemployment connote? In a word, mismatch. Firms have jobs, but can’t find appropriate workers. The workers want to work, but can’t find appropriate jobs. There are many possible sources of mismatch—geography, skills, demography—and they are probably all at work. Whatever the source, though, it is hard to see how the Fed can do much to cure this problem. Monetary stimulus has provided conditions so that manufacturing plants want to hire new workers. But the Fed does not have a means to transform construction workers into manufacturing workers.

This I agree with completely. But we could go further. Fiscal policy - at least the short-term stimulus that Krugman has in mind - can't transform construction workers into manufacturing workers either. The role for government here has more to do with long-run educational policy and social insurance.

Perhaps surprisingly, mismatch has not been studied extensively (to my knowledge) in macro/labor economics. Shimer has a somewhat stylized model of mismatch here, which doesn't quite get at the sectoral production issues I have in mind, but certainly is a good start. Conventional Mortensen-Pissarides search models, while seemingly motivated by heterogeneity in the labor market, avoid it altogether. Typical Mortensen-Pissarides workers are all identical, as are the firms, and the friction in matching them is all embedded in the matching function - a non-structural object if there ever was one. This can't be very helpful in addressing the current mismatch issue.

The Fed's Balance Sheet
Kocherlakota provides an explanation for the Fed's recent minor change in policy, which I discussed here. He says:

This kind of fluctuation in prepayments is at the heart of the FOMC’s new policy action in August. Long-term interest rates declined surprisingly fast in the past three months. But the fall in long-term rates meant that more people were prepaying their mortgages, and the Fed’s MBS principal balances were falling. In this sense, the Fed’s holdings of long-term assets were shrinking, leaving a larger share of the long-term risk in the economy in the hands of the private sector. This extra risk in private hands could force up the risk premia on long-term bonds and be a drag on the real economy. The FOMC decided to arrest the decline in its holdings of long-term assets by re-investing the principal payments from the MBSs into long-term Treasuries.

The Fed announced that, rather than letting the mortgage-backed securities (MBS) on its balance sheet run off as they mature (or are prepaid, or defualted on), it would replace them by US Treasuries, keeping the size of the balance sheet constant. Kocherlakota says (and I had not heard this before) that this was in response to prepayments of the underlying mortgages in the MBS. This is a little puzzling, as in the next picture, you can't see any reduction in the the Fed's MBS holdings. Maybe there is a lag in how this shows up in the published statistics, or maybe the Fed anticipates a reduction? Anybody know? 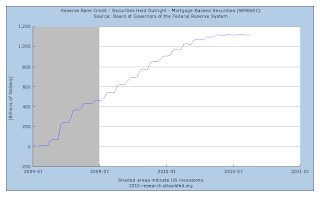 If the recent reductions in long-term Treasury yields is a response to a perceived change in policy, this is even more puzzling than Kocherlakota acknowledges here:

In my view, this reaction is unwarranted. The FOMC’s decisions were largely predicated on publicly available data about real GDP, its various components, unemployment, and inflation. I would say that there is no new information about the current state of the economy to be learned from the FOMC’s actions or its statement.

The Fed does not know more than the rest of us do. As well, the implications of the Fed's announcement are very small. The Fed has announced that they are going to keep something constant - the nominal size of their balance sheet - for the time being. Otherwise, this nominal quantity would have been falling very slowly. Even if the outstanding liabilities of the Fed are constant in nominal terms, they will be falling relative to total nominal GDP, and so the Fed's interventions will ultimately unwind (after a long time of course) even if the Fed does not change policy from what it just announced.
Posted by Stephen Williamson at 9:49 AM