I'm going to attempt to make a case that we could explain some of the anomalies in labor market behavior and in the current sluggishness in real GDP growth by thinking about the housing sector and some of the implications of the financial crisis and the recession for the sectoral reallocation of resources.

The phenomenon of a shifting Beveridge curve has drawn a lot of attention. I first learned about this from a talk Bob Hall gave in early July, and Rob Shimer has for some time featured this on his web page. Basically, the idea is that, given the current vacancy rate in the labor market, the unemployment rate would be much lower if we thought that the Beveridge curve (the observed negative relationship between the unemployment rate and the vacancy rate) were stable. Dave Altig has written about this, and Tasci and Lidner have claimed that the shift in the Beveridge curve we are seeing typically happens in the recovery phase of recessions. However, they are relying on pre-2000 vacancy rate data, which is notoriously poor. Altig's conclusion is that we have to wait and see more data before we can say much about this.

In any event, even if we thought that the Beveridge curve always shifts in this fashion during a recession, that could still indicate that mismatch in the labor market is important. During a recession, and maybe particularly this one, an important element of the recovery is that job vacancies and unemployment may not be well matched, in terms of the skills firms want and the skills workers have, and in terms of where the vacancies and unemployment are located. Further, in another post, I illustrated another way to look at the vacancies/unemployment data. Suppose we think about a standard Cobb-Douglas matching function, of the kind that researchers use when fitting Mortensen-Pissarides search models to the data, and include a "productivity" coefficient that measures the efficiency of the matching process. Then, measure matching efficiency as you would a Solow residual. I did that, in a crude fashion, and found a huge drop in matching efficiency, beginning in early 2008.

Why not look at some other data, to see if we can get more information about what is going on? Wikipedia, my favorite in-depth source of information, actually has a nice summary of BLS unemployment rate data by states, complete with color-coded maps. There is clearly a lot of dispersion, though I have no idea whether this is unusual or not. Unemployment rates differ from a high of 14.3% in Nevada to a low of 3.6% in North Dakota. The states where the housing market crashed are doing particularly poorly (California, Nevada, Oregon, Florida), as are states where manufacturing is in long-run decline (Indiana, Illinois, Michigan, Ohio). States west of the Mississippi and east of the Rockies are faring relatively well, but some of those states are not so populous. However, centers of population such as New York, Texas, Virginia, and to a certain extent Minnesota and Wisconsin, are doing better than average. We would presumably be safe in assuming that a Beveridge curve relationship holds at the state level so that, for example, North Dakota should have a very high vacancy rate and Nevada a very low one. However, we don't know for sure what the state-level vacancy rates are, as that data does not seem to be available.

In any event, it seems safe to say that, if I live in Las Vegas and am seeking employment, I would be much better off looking for work in Fargo, Minneapolis, New York City, Austin, or Washington, D.C., than in Las Vegas. However, there may be unusual factors that are impeding migration. For example, I may be unemployed in Las Vegas and own a house, which is currently underwater, and I do not want to default on my mortgage. Maybe the house is not underwater, but it is very difficult to sell.

Now, what about the general characteristics of the unemployed? From this table, we can see that they are more likely to be men, more likely to be black, and more likely to be less educated, than for the population as a whole. Again, I have no idea what this pattern looks like relative to the typical recession. However, it is certainly consistent with mismatch in terms of skills, i.e. the vacancies are for high-skill workers but the unemployed have relatively low skills. We need the other side of the story though, so we need to look at what has been happening across sectors. 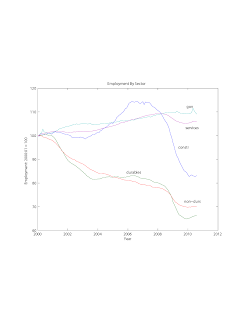 The chart shows employment by sector beginning in 2000, with everything normalized to 100 for the first observation. We see a large and steady decline in durables and nondurables manufacturing, and a steady increase in services and government. Construction booms until sometime in 2007, then tanks. The shift from manufacturing to services has been happening for a long time. This, along with observations on the skill premium in wages, indicate a fundamental shift from low-skill to high-skill jobs. However, the housing boom we experienced, in part due to incentive problems in the mortgage market, which you can see reflected in construction employment in the chart, soaked up some low-skill labor that was being shed by the manufacturing sector. Thus, the housing boom effectively slowed down or negated the long-term adjustment that was occurring in labor markets. Once the housing sector collapsed, the need for sectoral reallocation of labor hit with a vengeance and, we could argue, contributed to the very high unemployment rate we are seeing.

The crash in housing market construction is phenomenal, as you can see in the housing starts time series in the chart. 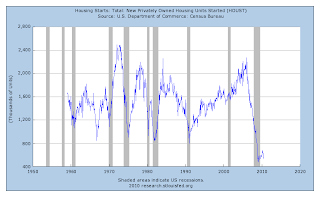 Housing starts fall beginning in 2007, and are currently at a lower level than at any point since 1959. Basically, the incentive problems in the mortgage market caused the US economy to build a large quantity of houses and other structures on false pretenses. Think of what would happen if you take an economy that is on a steady state growth path and drop a large stock of houses on it. That is essentially the state we are in now. This reduces the relative price of housing, and people stop building houses - for a long time. Notice in the chart that housing starts typically bounce back quickly in a recession - housing starts is typically a leading variable. That will not be the pattern in this recession. It will take a considerable time before depreciation and growth in the demand for houses take up the slack, housing prices increase, and new construction starts to pick up. In the meantime, workers formerly employed in the housing sector will be looking for work in other sectors, where their skills may match poorly with what employers are looking for, and the job vacancies may be in other parts of the country.

As further evidence for sectoral reallocation in explaining current labor market behavior in the US, consider what is going on in Canada, as I do here. Canada had none of the US problems in its mortgage market, it experienced a similar pattern of GDP growth during the recession (though their recovery is stronger - further evidence for my claims), and housing construction in Canada has followed a typical cyclical pattern. Indeed, Canada is currently experiencing something of a real estate boom. However, the change in the unemployment rate in Canada during the recession was considerably smaller, to the point where the Canadian unemployment rate is currently lower, whereas the unemployment rate in Canada tends historically to be much higher than in the US.

Finally, the next chart shows a crude measure of average labor productivity - household survey employment divided by real GDP - for the US. 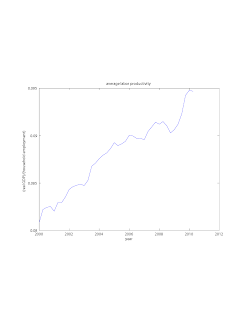 It seems to me that there is a good case for what Kocherlakota says here, that there is little or nothing the Fed can do about the currently-high unemployment rate. This is due to wide dispersion in geographical and sectoral unemployment and vacancies. There is a sense in which the Fed can move resources from once sector to another - indeed, that is part of what it did when it purchased a large portfolio of mortgage-backed securities. That moved resources from other sectors into the housing sector. But the resources moved in the wrong direction, working against the adjustment that needs to happen. I don't see a particular fiscal role that comes out of the sectoral reallocation story, other than a long-term re-evaluation of the adequacy of our unemployment insurance system and our system of public education.
Posted by Stephen Williamson at 12:35 PM