Here is Thoma's reply to my last post. Let's see what he says.

Saying that inflation is always and everywhere a monetary phenomena, and that prices depend upon the amount of outside money in the system, doesn't answer the question about how we get inflation before aggregate demand kicks up.

I don't know what "aggregate demand" is. That's in a language I can't make any sense of.

Exactly how the excess reserves leave banks in a depressed economy is not explained other than through reference to some vague friction that says banks won't want to hold reserves.

Presumably Mark would characterize the current state of the economy as "depressed." And, the fact is that reserves are leaving banks in the form of currency as we can see in this chart. 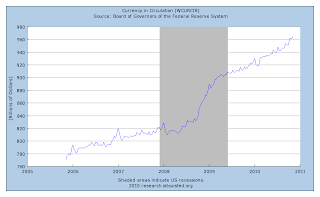 Note in particular that reserves have recently been leaving banks at a more rapid rate. It's possible that we would get more inflation even without QE2.

Is the supply of credit the main constraining factor or is it the demand?

A contributing factor could be that some banks are capital-constrained. It would help to know where the reserves are in the system. Someone at the St. Louis Fed is working on this. I'll find out more this week.

But I still don't see how excess reserves are converted into real investments in plants and equipment...

The reserves aren't somehow converted into loans. You're thinking about the money multiplier, I think, which is misleading. If the opportunities are there, the banks will lend. In the absence of intervention that will happen, though probably not as fast as we would like.

Finally, if claiming someone is a "wuss" is a key component of your argument, I suppose that's fine, but we shouldn't pretend that an opinion about someone's character is based upon any sort economic reasoning.

No, I wasn't disparaging Bernanke's character. I know him well from the old days, though I haven't talked to him for a very long time, and he is a fine person. However, based on his behavior as a central banker, he may be a bit of a wuss. Buying more than $1 trillion in mortgage-backed securities was rather wussy, in my opinion. I'm thinking it's likely that, when push comes to shove, he's not going to be good on his word. There's not much science in that of course.
Posted by Stephen Williamson at 3:23 PM