What is the Treasury Up To?

As I pointed out here, the QE2 Treasury security purchases by the Fed have actually had little effect on the stock of outside money, principally because there have been large inflows into the Treasury's General Account at the Fed. That continues to be the case. The first chart shows securities held outright by the Fed. 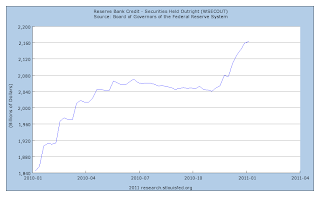 According to plan, the Fed's stock of securities has increased about $122 billion since the QE2 program began in November 2010. However, in the next chart, we see modest increases in currency and reserves. 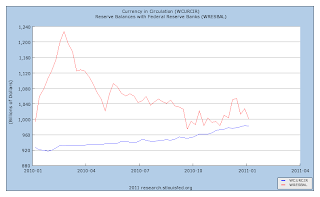 Since early November, the increase in currency is about $18 billion, and in reserves only about $10 billion. The next chart, however, shows that the Treasury accumulated $81 billion in its General Account over the same period. 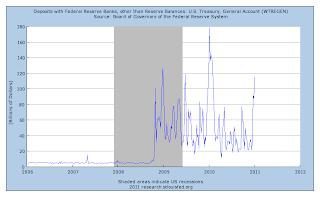 In its General Account and Supplementary Financing Account with the Fed, the Treasury now holds a total of about $315 billion. As one commenter suggested, perhaps what is going on is that the Treasury is hoarding cash in anticipation of a showdown over the federal debt limit, which seems as plausible as anything. In any event, if you thought that some of the effects of QE2 might come through effects on the stock of outside money (e.g. increases in the currency stock as banks dump the extra reserves), there is not that much of that happening.
Posted by Stephen Williamson at 4:44 AM