Pre-FOMC: A Guide to What's on the Table This Week

The upcoming FOMC meeting this week is a critical one, and an important test for Ben Bernanke. In terms of something we can agree the Fed should be concerned with - inflation - here is what is going on. The figure shows the cpi, the core cpi (cpix in the figure) the pce deflator, and core pce deflator (pcex in the figure). I've taken January 2005 as a base period here. This is obviously arbitrary, but that choice is instructive in this context. The figure also shows a 2% trend path, which represents the Fed's quasi-explicit target. I'm not defending the 2% inflation target, and I don't think the Fed can defend it either, relative to 0%, 1%, 3%, or 4%, for example. 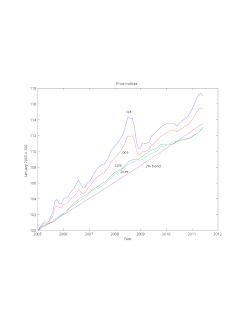 In June, the headline cpi was 3.1% above the 2% trend, the pce 1.6% above, the core cpi 0.4% below, and the core pce 0.6% below. Now, if the FOMC wanted to be consistent with previous FOMC statments and public minutes, and if it were looking only at that picture, there would be grounds for tightening. While core price indexes are a little below where they should be, an increase in the relative price of food and energy has persisted since 2005, and there is no good reason to expect that relative price shift to go away. As I noted here, the FOMC is on record as being focused on headline inflation, and rightly so.

Of course, the FOMC is not looking just at that picture. Indeed, unless you have been living in an isolation tank for the last several weeks, you know that all hell appears to be breaking loose. The Fed is bound by law to speak to its dual mandate, and I think there is little dispute about the role of a central bank in promoting financial stability.

On the real side, the last quarterly GDP numbers were weak, and there is nothing very promising in the monthly data. Things could be worse, but residential construction is still in the toilet, with no pickup in housing starts; consumption expenditure is weak; employment is growing but at a slow pace; the employment/population ratio is also still in the toilet.

In financial markets real and nominal yields on US government debt have recently dropped significantly. Stock prices are falling. Sovereign debt problems in Europe are going unsolved. Our federal government's inability to develop a coherent fiscal plan has the potential to get us into trouble.

How do we make sense out of this, and what should the Fed be doing about it? First, suppose that the turmoil in financial markets is only temporary, but nevertheless forecasts indicate that real growth (absent Fed action) will continue to be more sluggish than we had expected. Should the Fed be doing something? No, there is nothing it can do. The interest rate on reserves has been at 0.25% since fall 2008, and the "extended period" language could be in the FOMC statement until eternity. The Fed could do QE3, but QE2 was irrelevant, so another round would have no effect either. Even if you thought quantitative easing worked as the Fed claims, long-maturity Treasury yields are already low. The problem is not that safe long bond yields are too high.

On the financial front, the big story is uncertainty. One story you hear is that firms are not investing because they are uncertain about future government behavior. While we appear to have a weak executive branch and a goofy legislative branch, I think the uncertainty people are concerned with is rooted in debt problems - in this case sovereign debt. Europe's sovereign debt problems have the potential to produce calamity on the order of what we saw in fall 2008. Mitigating that is our previous experience, and the fact that policymakers have had more time to figure out where the vulnerabilities lie.

A key problem is that low US Treasury yields reflect a scarcity of safe assets in the world. US debt, in spite of our recent fiscal fracas and S&P downgrade, is still viewed as a safe haven. I mentioned above that inflation, if anything, is currently too high in the US, but a continuation of the current financial conditions, or a worsening of the situation in Europe, would ultimately lead to a downward price level adjustment in the US, due to the increase in demand for the liabilities of our consolidated government. Effectively, there is a liquidity problem, but it is not one that can be solved through standard open market operations - this is not a currency shortage (as for example in the Great Depression) but a shortage of consolidated-government debt (i.e. the net debt of the central bank and federal government combined).

What to do about the liquidity shortage? The Fed can of course use conventional discount window lending, but currently the liquidity problem is mainly in Europe, not in the US. There is another tool, though, which is the Fed's swap facilities with foreign central banks. These played an important role during the financial crisis, were discontinued, and then renewed again in May 2010. As far as I can tell, these swap lines are still open, but are currently not being used, and I don't know why. Maybe someone has information on this.

In any event, I'm very curious to see what comes out of this FOMC meeting. Reassuring words? Something big? There is certainly a lot at stake, including the credibility of the institution.
Posted by Stephen Williamson at 8:58 AM