Small and Large Footprints: Reserves and the Fed 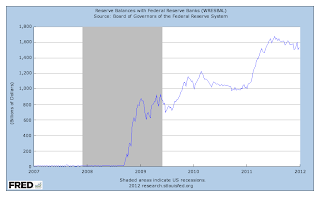 Before the financial crisis, the primary role of reserves was as a means of payment among large financial institutions. Commercial banks of course have to fulfill reserve requirements, but given financial innovation that allows banks to essentially bypass the requirements, it is most useful to think of reserve requirements as irrelevant in the United States. Pre-financial crisis, a stock of $5 billion to $20 billion in reserves was sufficient to support all intraday financial payments and settlement in the United States. It is important to note that this small quantity of reserves was funding a huge quantity of daily payments. Indeed, in 2008, the average daily value of transactions on Fedwire (using reserves) was $2.7 trillion, so the intraday velocity of reserves is immense. It is important to take account of intraday credit extended by the Fed as well, which is essentially outside money created within a day that goes away overnight. In 2008, average daylight overdrafts (as within-day Fed credit is called) were about $62 billion.

Since the financial crisis, as can be seen in the chart, reserves have grown to the neighborhood of $1.6 trillion - more than 100 times the typical stock of reserves in the pre-crisis period. What implications does this have? During the financial crisis and shortly after, it was common for economists and Fed officials to discuss "exit strategies." The typical view was that we were in the middle of unusual circumstances requiring unusual monetary policy interventions, but that these interventions would eventually be unwound. Here's a speech that Charles Plosser made in September 2010. Plosser says:

As I have argued in past speeches, the Fed will need to shrink the size of its balance sheet toward pre-crisis levels and return its composition to all Treasuries.

There are two proposed mechanisms for implementing IOR [interest on reserves], both of which can impinge on central bank independence. One IOR operating mechanism is the floor system, in which the central bank sets its policy rate equal to the IOR. Under this framework, the central bank supplies enough reserves so that the banking system faces a perfectly elastic supply schedule of reserves.16 Under such a floor system, the Fed’s balance sheet is divorced from interest rate policy because an unlimited amount of reserves are available at the IOR-policy rate. Some have described the floor system as the “big footprint” central bank because its balance sheet can be large without directly affecting the monetary policy instrument, the IOR. Some think that this approach has advantages because it would enable the central bank to provide liquidity in a financial crisis without necessarily altering the stance of monetary policy.

The other IOR operating mechanism is the corridor system, in which the central bank’s policy rate is a market rate that is always between the rate charged at the discount window and the IOR. The corridor system does impose constraints on the size of the balance sheet because the supply of reserves would be set at a level that achieves the targeted interest rate. Thus, this might be called the “small footprint” central bank.

Thus, the system the Fed currently operates under is a floor system, whereby there is a large stock of reserves outstanding overnight, and the interest rate on reserves essentially determines the overnight interest rate (with some slippage in the United States due to GSE reserve accounts). the alternative system, the corridor system, is what the Bank of Canada currently adheres to. In Canada, reserves essentially go to zero overnight, and intervention by the Bank determines the overnight rate, which is higher than the interest rate on reserves and lower than the rate at which the Bank lends to financial institutions.

Plosser has some reasons not to like the "big footprint" floor system. Something I could add is that, under a corridor system the Fed gets current information on the daily shocks hitting the payments system and financial markets more generally. If the demand for overnight reserves rises or falls, the Fed has to intervene in the overnight market in order to achieve its target for the fed funds rate. If the same things happen under a floor system, this would have to be reflected somehow in the quantity of reserves outstanding, but there are currently many other factors, such as movements in and out of Treasury accounts, that also affect reserves. Maybe the Fed can untangle all these things; maybe not. The key problem is that the reserves are an accident waiting to happen. The Fed can always counteract higher inflation by increasing the interest rate on reserves under a floor system, but if it does not tighten when the appropriate time comes, the danger is a self-fulfilling expectation of higher inflation.

In my opinion, since quantitative easing is irrelevant under current conditions, one could reverse it with no effect. That is, the Fed could sell $1.6 trillion in Treasury securities and mortgage backed securities, reduce overnight reserves to some small amount on the order of what existed pre-crisis, and nothing much would happen. Then we would transit from a floor system to a corridor system.

There is another argument being made, though, as to why a big-footprint floor system might be a good idea. Unfortunately I can't find a link to this paper, but here are some slides from a presentation by Jamie McAndrews at a recent Bank of Canada conference. People who concern themselves with the economics of payments systems (and there should actually be many more of such people), including Jamie's group at the New York Fed, focus on issues to do with the timing of payments during a given day among financial institutions, the Fed's policies toward daylight overdrafts, and how these things relate to general monetary policy issues. If reserve balances are too scarce during the day, then financial institutions might delay payments they need to make, and a type of coordination failure arises. One could always make a payment by taking out a loan (a daylight overdraft) from the Fed, but that is costly as the Fed charges interest on daylight overdrafts, and there are also credit limits. Why? The Fed is worried about systemic risk. If the Fed extends too much daylight credit, there may be a danger of systemic default where the Fed ends up holding the bag.

But, as McAndrews and company point out in their paper, the large quantity of reserves that has existed in the financial system post-crisis appears to have speeded up clearing and settlement in the payments system, and reduced the quantity of daylight overdrafts. They don't come up with measure of the welfare benefits, but it seems there has to have been a dramatic reduction in payment delay costs.

Is this a serious argument, or just part of an attempt by the Fed to justify the existence of a very large quantity of reserves that now appears to be out there indefinitely? It's important to recognize that reserves held overnight, and daylight reserves are very different animals. Overnight reserves, which is what is measured in the above chart, just sit. They are not used in transactions. Currently, most of the reserves in existence during the day also sit, but some of them are used in clearing and settlement among financial institutions - a transactions role for reserves. If we wanted it, we could have a lot of reserves in daylight hours, and zero reserves overnight. There are different ways to do this: (i) The Fed could inject the outside money every day through daylight overdrafts. If there is some worry about default risk, the Fed could take collateral against the daylight overdrafts, as in other large-value payments systems in the world. (ii) The Fed could conduct an open market purchase each morning. (iii) The Fed could do a reverse-repo in the overnight market at the end of each day.

With regard to the last option, reverse repos have become a bigger deal recently. The Fed once proposed reverse repos (along with term deposits at the Fed) as a "reserve-draining" tool - part of an exit strategy. The second chart shows that the value of reverse repos on the Fed's balance sheet is currently about triple what it was before the financial crisis. 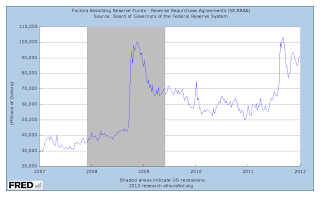 So, there seems a way to have our cake and eat it too. The Fed can have a small footprint, and also make reserves sufficiently plentiful during daylight hours to make large-value financial transactions occur efficiently.
Posted by Stephen Williamson at 2:16 PM