The Beveridge Curve and the Long-Term Unemployed 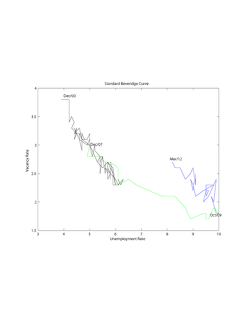 The data in the chart runs up to March 2012, the latest date for which we have JOLTS data. The unemployment/vacancies data from December 2000 to December 2007 (the beginning of the last recession) trace out what is apparently a stable Beveridge curve. As well, the data from December 2007 through October 2009 is consistent with that stable Beveridge curve, but the post-October 2009 observations make it appear that the relationship has shifted. If we had thought that the 2000-2007 Beveridge curve was structural, we would have predicted an unemployment rate of 5.25-5.5%, conditional on the observed vacancy rate in March 2012. But the actual unemployment rate in March 2012 was 8.2%. 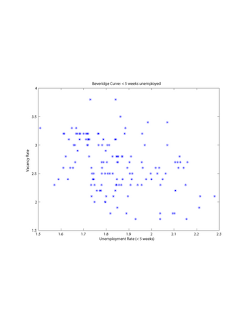 In this chart, you don't see any correlation at all. But in the next two charts, you get nice Beveridge curve correlations, for those unemployed 5 to 14 weeks, and 15 to 26 weeks respectively. 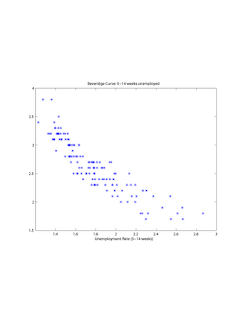 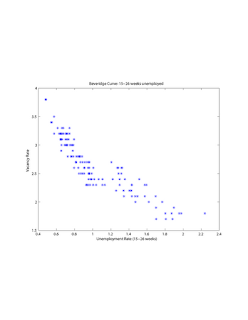 So, now you know what group has to be explaining the shift in the Beveridge curve in the first chart. The next chart is for those unemployed 27 weeks or more. 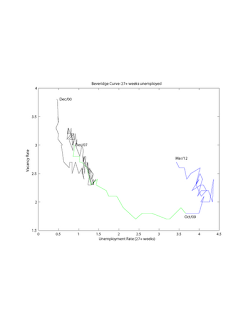 In this chart I have connected the dots and supplied some dates. The shifts you see in the Beveridge curve in the first chart seem to be entirely due to what is going on with the long-term unemployed. Further, in this last chart you can see an earlier shift, which occurred after the 2001 recession.

Finally, let's take a look at the number of those unemployed 27 weeks or more, as a fraction of total unemployed, since 1948. 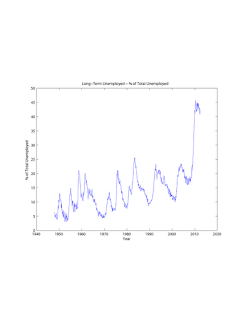 So, where do these observations lead us? The unemployment rate is currently unusually high, and high in a way that does not appear to be consistent with posted vacancies. But if we disaggregate, it seems that the characteristics of the time series might have a lot to do with the fact that there are much more long-term unemployed now than is typically the case. But why has that happened? Especially since the phenomenon appears not to be new (going back to 1990 at least), it's hard to avoid thinking about mismatch. But in order to evaluate that story, we need more information about the long-term unemployed. How many of these are former construction workers? How many are David Autor's middle-skill people? Possibly the financial crisis merely increased the rate of structural change that was already occurring in labor markets? Are there other features of the long-term unemployed we need to be thinking about? The long-term unemployed may have depreciated skills; they may have been picked over as a group and be of perceived low average quality. Their search effort may be low. All of these things matter for policy, particularly for unemployment insurance programs.

What is clear is that conventional models typically have insufficient heterogeneity to explain these facts. In Mortensen-Pissarides models, for example, labor is homogeneous, and mismatch is embedded in reduced-form matching functions. I'm interested in learning about work you know about that either already captures this stuff, or could potentially do so.
Posted by Stephen Williamson at 9:52 AM