The FOMC will meet Wednesday/Thursday this week, so now is a good time to review the current state of monetary policy in the United States. The dominant argument within the committee is likely to be that: (i) The Fed is falling well short of its dual-mandate goals; (ii) Therefore more accommodation is called for; (iii) The monetary accommodation should take the form of more quantitative easing (QE), and the most effective QE action would be the purchase of more mortgage-backed securities (MBS).

How is the Fed doing with respect to its dual mandate? The Fed thinks that a 2% annual rate of increase in the personal consumption (pce) deflator is optimal. The first chart shows the 12-month percentage increase in the pce deflator, and by this measure the Fed is missing its goal on the low side. 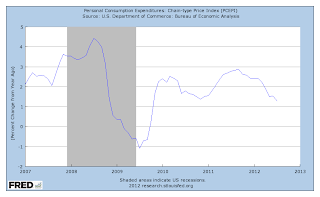 The year-over-year percentage increases in the pce deflator have been well below 2% for several months.

However, it's easy to make the case that inflation is neither too high nor too low, but about right. The next chart shows the pce level, and a 2% growth path from January 2007. 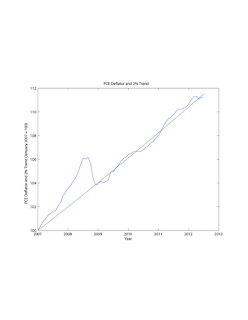 If we adopt a longer time horizon, the pce deflator is only slightly below the 2% growth trend, and it does not particularly matter if we treat the base period as January 2007, or January 2009, for example. If the Fed wants to make up for the period in the recent past of inflation above 2%, it should consider inflation to be currently on track.

Further, financial markets seem to be confident that the Fed will continue to be serious about inflation control into the indefinite future. The breakeven 10-year inflation rate, measured as the difference between the nominal 10-year Treasury yield and the 10-year TIPS yield, is shown in the next chart. 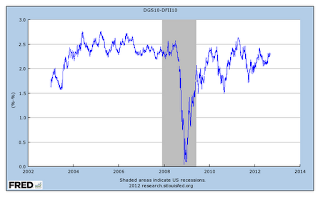 In the chart, the current breakeven rate is a little below the pre-financial crisis average, which seems roughly consistent with a 2% average inflation rate for the next 10 years. While there exists at least one measure of anticipated inflation, the Cleveland Fed's inflation expectations measure that is quite low and falling, I don't take it seriously, principally as it seems inconsistent with what is happening to the breakeven rate.

In conclusion, if the Fed were looking only at inflation and measures of anticipated inflation, it would not find good reasons to change policy.

But what about the "real" side of the Fed's mandate? By most measures, economic performance in the US appears poor. For example, the next chart shows the log of real GDP and a 3% growth trend from the first quarter of 2000. 3% growth is taken as a benchmark, as this is roughly the post-World War II average. 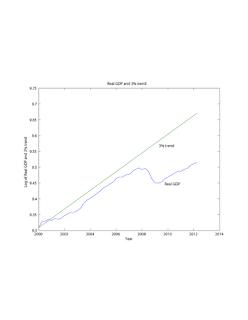 Real GDP was already below the 3% trend when the last recession began, and never made up the ground lost during the recession. Indeed, real GDP post-recession appears to be on a lower growth path with a smaller rate of growth. Labor market observations give an even more sluggish picture.

What is the economy's "underlying potential" anyway? It's the level of aggregate real GDP that we could achieve if, within the set of feasible economic policies, policymakers were to choose the policy that maximizes aggregate economic welfare.

But that is not what the majority of FOMC participants seem to think. My guess is that the consensus view is that the current adjustment to a better future state of the world is taking place too slowly, and that the Fed needs to be more accommodative, whether inflation is low low or about right.

Is more accommodation called for? Before answering that question, we have to ask whether it is actually feasible for the Fed to take any action that is more accommodative. I don't think so, as discussed here and in other posts. But suppose we think that the Fed can intervene, either by way of forward guidance or QE, and move asset prices in the way it says it can. What will lower bond yields do for us? The next chart shows a measure of the real 10-year safe bond yield - the yield on 10-year TIPS. 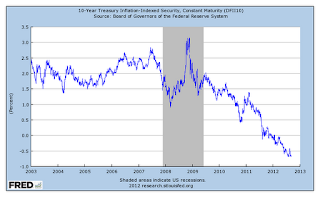 This real yield was at about 2% at the end of the recession, and has fallen on trend to less than -0.5% since then. By any measure, real bond yields are historically extremely low. Suppose that the FOMC were to announce that the target for the policy rate will stay where it currently is until late 2015, or that it will buy a few hundred billion dollars more in long-maturity assets. How much lower could the Fed move real bond yields? How large an effect could this have on any aspect of real activity, for example what investment projects are going to be financed that would not otherwise have been?

Why MBS purchases? Some people in the Fed system and on the FOMC seem to be worried that, if the Fed purchases more Treasury bonds, that this would disrupt markets in these assets. These views, and support coming from this work, for example, are pushing the FOMC toward MBS purchases, in addition to (perhaps) a waning in enthusiasm for the use of forward guidance. The disruption argument seems wrongheaded. First, disruption would seem to be a good thing if one thinks that QE works and is looking for the asset market where the Fed can get the most bang for the buck. By purchasing Treasury bonds and disrupting the Treasury market, the Fed will drive asset market participants elsewhere, which seems to be the whole idea. Second, there are plenty of good reasons for the Fed to favor moving in the direction of a portfolio consisting almost entirely of Treasury debt.

What are the potential costs of further intervention in the form of QE? If QE matters little, what's the big deal? Perhaps the FOMC can vote for another round of QE, hope for GDP growth to pick up on its own, and Ben Bernanke will come out of this looking very good. The problem is that Fed people have bought into QE in a big way. They really think it works, to the point that they believe that reverse-QE will control inflation, which it won't. In the event that it becomes clear that inflation is too high and needs to be curbed, the FOMC will take some time to learn how to do it properly.
Posted by Stephen Williamson at 2:29 PM