Ben Bernanke and the Term Structure of Interest Rates

The FOMC meets today and tomorrow, and will likely vote to continue with its current program of purchases of $85 billion per month in mortgage-backed securities and long-maturity Treasury bonds - "quantitative easing." A few weeks ago, Ben Bernanke publicly articulated some of the economics behind quantitative easing. It's useful reading, but for me it was far from reassuring.

The core of Beranke's talk uses empirical work from a paper coauthored by D'Amico, English, Lopez-Salido, and Nelson at the Board of Governors. We can take this as honest empirical work, I think, but we can infer - as usual - that the work was done in part as reverse engineering. Quantitative easing (QE) came before the empirical and theoretical work that was done at the Fed to justify the policy.

But leaving aside our suspicions for now, what does D'Amico/English/Lopez-Salido/Nelson (henceforth DELN) have to say? The authors think that there are three avenues through which QE might work:

1. Expectations/signaling: QE may move asset prices because it signals something about future Fed policy actions that actually matter - through this channel the QE asset purchases don't matter directly.
2. Preferred habitat/scarcity: QE might matter because markets for assets of different maturities are at least partially segmented. Then, central bank actions that change the relative supplies of assets of different maturities will cause the term structure of interest rates to change.
3. Duration risk: The yield curve may typically be upward-sloping because long-maturity bonds are riskier assets - their prices are more volatile. If the Fed removes long-maturity bonds from public circulation, this could remove some duration risk, and therefore make asset holders more willing to bear duration risk at the margin, thus making the yield curve less steep.

If you've read this previous post, you'll understand that I don't think that either of (2) or (3) hold water. Certainly (1) does, and I wrote about that in my previous post. Basically, for political reasons QE may constrain future Fed actions in particular ways.

To address preferred habitat, we have to think about the asset transformation activities of private financial intermediaries, vs. what the Fed is capable of doing when engaging in the same types of activities. Particular individuals may have well-defined preferences over future payoffs (a preferred habitat, if you like), but private financial intermediaries are in the business of taking assets with particular future payoff streams and transforming them into liabilities with different payoff streams. Banks intermediate across maturities; and derivatives and asset-backed securities are designed to reallocate risk in particular ways, for example. Like private banks, the Fed can also transform long-maturity assets into short-maturity liabilities. If you want to construct a model of "preferred habitat," you need to model intermediation - by the Fed and private financial intermediaries. If QE is to matter in this context - for the better - it must be because the Fed is somehow better at intermediating across maturities than are private sector financial intermediaries. No one has to date carried out such a theoretical exercise. Certainly Vayanos/Vila, cited by DELN, do not do that. In the Vayanos/Vila model, preferred habitat is represented by defining preferences over assets - a poor place to start.

(1)-(3) is the "theory" in the DELN paper, but most of the authors' effort went into the empirical work. Basically, they construct measures from the data that allow them to decompose nominal bond yields in ways that they think will give us a handle on the effects of QE. That part of the paper is summarized in Bernanke's speech. Here's a chart of Bernanke's that helps to explain it. 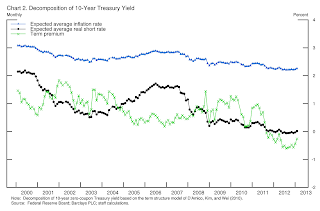 In the chart, the 10-year nominal bond yield has been broken down into three components: (i) expected average inflation (inflation premium); (ii)expected average real short rate; (iii) term premium. With risk neutrality, the first two components should explain everything. That's basically the expectations theory of the term structure, which implies that the real yield is the average of the real future short rates, plus average anticipated inflation (that's Irving Fisher). The "term premium" is then just a residual. It's not at all clear what it means, but Bernanke wants to think of it this way:

In general, the term premium is the extra return investors expect to obtain from holding long-term bonds as opposed to holding and rolling over a sequence of short-term securities over the same period.

In any case, what you see in Bernanke's chart is: (i) a slow decrease in the measured expected average inflation rate, beginning in 2007; (ii) a decrease in the expected average real short rate from about 1.5% in 2007 to about 0% today; (ii) a volatile term premium that declines into negative territory beginning in the latter half of 2011. Bernanke wants to claim credit for that term premium decline - he thinks that's driven by QE. But do we trust the measurement?

I'm finding it hard to square what DELN and Bernanke are seeing with what I can eyeball in the 10 year nominal bond and TIPS yields, and in the inflation data. Here's a plot of the breakeven inflation rates from the 10-year bond yield data, and the twelve-month pce inflation rate (I know that TIPS is contingent on the CPI - I used PCE here for a specific reason). 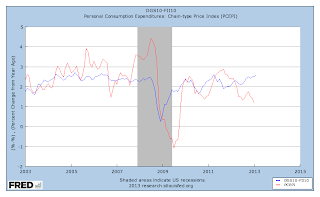 Before the recent recession, the breakeven rate seemed roughly consistent with the average rate of inflation we were actually observing. And the breakeven rate has roughly returned to pre-recession levels, which might lead us to believe that the expected average inflation rate is about at what the average was for 2003-2007, which my eyeball tells me is 2.6-2.8%. But Bernanke is telling me that anticipated inflation has fallen, to about 2.2% currently.

Next, let's look at the raw 10-year nominal and TIPS yields. 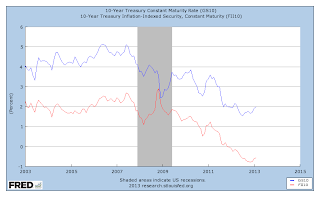 Note in particular that Bernanke is telling us that the TIPS yield has dropped by about 2.3 percentage points from the end of the recession, but he wants us to believe that the expected average real short rate has dropped by only 1.5 percentage points. We are supposed to believe that 10-year TIPS prices are so high because TIPS have become really scarce and/or because market participants think there is less duration risk. Well, to the best of my knowledge, the Treasury has been working away to extend the average duration of the government debt, and that effect outweighs the effects of Fed asset purchases, on net. Thus government/Fed actions have made long bonds less scarce. Further, the contortions the Fed is going through would surely make most market participants more uncertain about real future rates, which would tend to increase any duration risk that might exist out there.

1. DELN estimate their model for the period 2002-2011. Obviously the monetary policy regime changed dramatically after the financial crisis. How can we think of the pre-2008 data as useful for thinking about the problem?
2. The current scarcity of safe assets (for use as collateral and in financial exchange) implies that Fisher relations don't hold, so inflation premia aren't going to work as in the crude theory outlined in DELN.
3. The key problem is that the Fed is lacking a structural model. They need a model that can successfully explain the term structure of interest rates, and capture the key details of how monetary policy works - both pre-crisis and post-crisis. Without that QE, and attempts like Bernanke's to rationalize it, are just mumbo-jumbo.

Posted by Stephen Williamson at 3:08 PM