Here's a quote from today's Wall Street Journal, which I think summarizes public perception of what the Fed is up to.

Fresh signs that the Fed is considering pulling back on efforts to support the U.S. economy rattled markets. The dollar rose, while stocks, emerging-markets currencies and bonds all fell.

So what are these "fresh signs?" The Fed's approach to monetary policy at the zero lower bound is two-pronged:

1. Forward guidance The Fed has effectively tied its hands with respect to the target for its policy rate. The previously-announced policy is that policy rate target will remain where it is (0-0.25% for the fed funds rate) at least until the unemployment rate passes the 6.5% threshold. Bernanke clarified the forward-guidance policy in his press conference following the FOMC meeting.

First, today the Committee reaffirmed its expectation that the current exceptionally low range for the funds rate will be appropriate at least as long as the unemployment rate remains above 6-1/2 percent, so long as inflation and inflation expectations remain well-behaved (in the senses described in the FOMC’s statement). As I have noted frequently, the phrase “at least as long” in the Committee’s interest rate guidance is important; the economic conditions we have set out as preceding any future rate increase are thresholds, not triggers. For example, assuming that inflation is near our objective at that time, as expected, a decline in the unemployment rate to 6-1/2 percent would not lead automatically to an increase in the federal funds rate target, but rather would indicate only that it was appropriate for the Committee to consider whether the broader economic outlook justified such an increase.

2. Quantitative easing (QE) Recall that the Fed embarked on "operation twist" in September 2012, which evolved into outright asset purchases of $85 billion per month - $40 billion per month in mortgage-backed securities, and $45 billion in long-maturity Treasuries. Since March, the FOMC's stated policy is that these asset purchases should be explicitly contingent on the state of the world, much as policy-rate changes are contingent in "normal" times:

The Committee will continue its purchases of Treasury and agency mortgage-backed securities, and employ its other policy tools as appropriate, until the outlook for the labor market has improved substantially in a context of price stability. The Committee is prepared to increase or reduce the pace of its purchases to maintain appropriate policy accommodation as the outlook for the labor market or inflation changes. In determining the size, pace, and composition of its asset purchases, the Committee will continue to take appropriate account of the likely efficacy and costs of such purchases as well as the extent of progress toward its economic objectives.

Bernanke added some more detail in his press conference:

If the incoming data are broadly consistent with this forecast, the Committee currently anticipates that it would be appropriate to moderate the monthly pace of purchases later this year; and if the subsequent data remain broadly aligned with our current expectations for the economy, we would continue to reduce the pace of purchases in measured steps through the first half of next year, ending purchases around midyear. In this scenario, when asset purchases ultimately come to an end, the unemployment rate would likely be in the vicinity of 7 percent, with solid economic growth supporting further job gains—a substantial improvement from the 8.1 percent unemployment rate that prevailed when the Committee announced this program.

So, given the stated policy rule, how would a rational forecaster have updated his or her forecast given recent information? The key news is that:

1. The measured inflation rate has fallen, as shown in the chart. 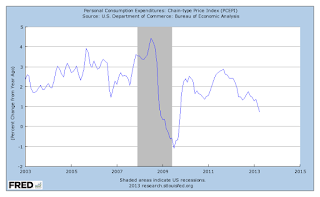 2. Anticipated inflation, as measured by breakeven rates (nominal Treasury yield minus TIPS yield for the same maturity) has fallen, as shown in the next chart. 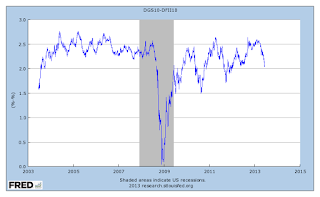 One difference is worth mentioning: While participants continue to think that, in the long run, the Federal Reserve’s portfolio should consist predominantly of Treasury securities, a strong majority now expects that the Committee will not sell agency mortgage-backed securities (MBS) during the process of normalizing monetary policy, although in the longer run limited sales could be used to reduce or eliminate residual MBS holdings.

The first two pieces of news might make a rational forecaster predict a more accommodative policy, given the announced policy rule. Inflation is lower, and expected to be lower, so we should anticipate, from the forward guidance language, that the policy rate should stay where it is for a longer time beyond the point at which the 6.5% unemployment rate threshold is crossed. But, given the QE language, we would expect that a lower current inflation rate would produce an upward adjustment in the size of asset purchases, and that wasn't in the FOMC statement. Maybe the rational forecaster might be a little confused. Adding to that confusion is this part of the FOMC statement:

Of course the word "stable" is open to interpretation, but it seems that a drop of about a half point in the breakeven rate could not be characterized as stability. A rational forecaster might think that the Fed is misrepresenting information, or not acting in a way consistent with its promises. Thus, more confusion.

The third piece of news (the likelihood that the Fed will never sell any of its MBS portfolio) is important if we buy the Fed argument that QE matters - for quantities and prices - and that monetary policy actions far in the future can make a big difference for current prices. If we accept all of that, policy just became more accommodative.

So all the news points to more accommodation, though perhaps in a muddled way. But the public - to the extent it cares - is drawing the opposite conclusion. What gives? There must be a communication problem. I'm guessing that's what Bullard's dissent is about:

Voting against the action was James Bullard, who believed that the Committee should signal more strongly its willingness to defend its inflation goal in light of recent low inflation readings...

Bullard has been worried in past about low inflation (see this paper) and seems to have been a supporter of contingent QE. Maybe he was pushing for an increase in asset purchases in response to the recent news? In any case, Bullard is likely to comment publicly on his dissent soon, so watch for that.

My conclusion is that the monetary policy actions of the Fed, and the public statements of the FOMC and Fed officials, have become too difficult for the average person - or even the most sophisticated financial market participants - to process. Up against the zero lower bound on its policy rate, the Fed embarked on a bold experiment involving forward guidance and (very) large-scale asset purchases. Fed officials are perhaps as confused as everyone else about the effects of those policies. For example, this is an excerpt from an interview with Narayana Kocherlakota. He's discussing what we know about the effects of QE.

The benchmark thinking about QE, actually, was done by Neil Wallace and later by Gauti Eggertsson and Mike Woodford, following up on Neil’s work. And that baseline economic modeling would say these kinds of interventions should have no impact on yields and no impact on the economy at all.

Now, the empirical work that I mentioned has validated that there does seem to be an impact on yields. What that means in terms of the impact on economic activity, I’m still sorting through, to be honest. As of now, I would say that I think quantitative easing works in the right direction, but gauging the actual magnitude of its impact remains challenging.

With regard to the theory behind QE, the Wallace paper Kocherlakota is referring to is this one. Wallace writes down a model and derives conditions under which an open market operation is irrelevant (for prices and quantities). That does not relate specifically to QE - it applies to any open market operation. Presumably a model that would make sense out of QE would also tell us that "normal" monetary policy matters in the way the Fed thinks it does. The Eggertsson/Woodford paper doesn't help us much either. They work with a model where the only friction relates to sticky prices - hardly a good starting point for thinking about the effects of asset swaps by the central bank. So there is not theory to back up what the Fed is doing - and they are doing it in a big way. Kocherlakota seems to put some faith in the empirical evidence, but as he should know we can't interpret data without a theory. Conclusion: The people running the Fed know no more nor less about QE than anyone else. And what we know is: not much.
Posted by Stephen Williamson at 1:50 PM