The FOMC meets today and tomorrow. Here's what the committee members will be discussing. Since May, expected inflation has fallen and real bond yields have risen, as you can see in the first chart. 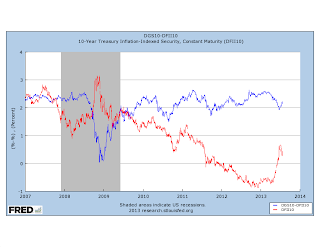 The chart shows the breakeven rate (10-year nominal Treasury yield minus TIPS yield) and the 10-year TIPS yield. The breakeven rate tends to be biased upward as a measure of anticipated inflation (TIPS insure inflation risk, and a TIPS-holder does not have to pay the Treasury if the CPI inflation rate falls below zero), but typically moves in the same direction as anticipated inflation. As well, if we compare the path for the PCE deflator to a 2% growth path from January 2007, we get the next chart. 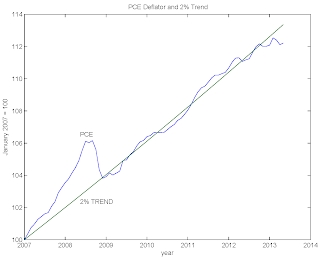 Since late 2012, the PCE deflator has been south of the 2% growth trend, and the last observation (May 2013) is about 1% on the low side. If you care about year-over-year inflation rates, you'll come to the same conclusion - the inflation rate is too low, relative to what the Fed wants.

Given that the goal of the latest QE (quantitative easing) exercise, which has been proceeding at a pace of $85 billion in asset purchases ($45 billion in long Treasuries, $40 billion in mortgage-backed securities) per month since fall 2012, was to reduce bond yields and presumably to increase current and anticipated inflation, things are not moving in the right direction.

On the other side of the dual mandate, the unemployment rate is still above where the Fed wants it to be. 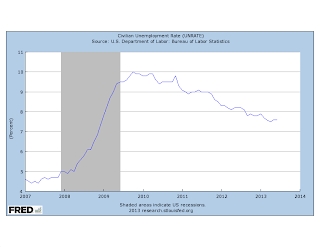 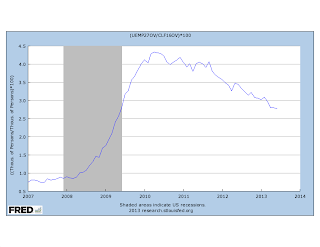 1. If the FOMC wants to be consistent with its previous policy statements, and what Bernanke has said in public, it should plan to purchase assets at a higher rate. The news has been on the down side on inflation, anticipated inflation, and long bond yields, with nothing dramatic happening one way or the other in the labor market. So, in order to keep its promises, there should be more QE, and Bernanke should not be talking about "tapering."
2. It seems almost certain that Bernanke will not be in his current job in six months, so why do we care what he says? If we knew the next Chair would be Janet Yellen, then we care what Bernanke says now, as it seems Yellen would just follow through on that. If Larry Summers gets appointed, then things change entirely. Summers is on record as thinking that QE probably doesn't matter much, and that we might have to revise our views about what the capacity of the U.S. economy is. Maybe QE, thresholds, etc. all go out the window.

In an ideal world, what should the Fed be doing? In the past I've argued that QE shouldn't matter, for quantities and prices. But suppose I were working for the Fed full time, and someone asked me to come up with a rationale for QE. What would I do? The answer is this paper, which is the best I can do at the moment, to come up with a model where QE actually makes a difference. You can read the paper to your heart's content, but here's the idea. To take QE seriously we have to be specific about fiscal policy and its relationship to monetary policy, what private financial intermediaries and the central bank can and cannot do, and the roles of assets in exchange and as collateral. The paper does all that, I think. Start with a world where the fiscal authority is doing something stupid. It issues nominal government debt - in short and long maturities - and sets taxes in such a way that the real value of the consolidated government debt is constant forever, at a value V. The central bank can issue reserves, which are perfect substitutes for short-maturity government debt, and currency. The private sector needs currency for some kinds of transactions, and there are other transactions where people trade intermediary liabilities that are backed by short and long-maturity government debt and reserves. Banks serve to allocate liquidity (currency, reserves, government debt) efficiently to the appropriate transactions. The central bank can execute asset swaps - its job is to manage the composition of the outstanding consolidated government debt, consisting of currency, reserves, short maturity bonds, and long maturity bonds.

But we can't trust banks, which need to (implicitly) collateralize their deposit liabilities. The collateral consists of the bank's assets - reserves and government debt. But collateral is imperfect, in the sense that the bank can abscond with some fraction of any asset in its portfolio (a Kiyotaki-Moore problem). To get a term premium - an upward sloping nominal yield curve, it must be easier to run away with long-maturity government debt. This is definitely a short cut, as I discuss in the paper, but a useful starting point. Also, for there to be a term premium, there must be a shortage of liquidity, i.e. V must be small enough that we can't get efficient exchange - of assets for goods.

What does QE do? A QE experiment involves a purchase of long-maturity government debt by the central bank, holding constant the short-term nominal interest rate. This essentially mitigates the asset shortage. The central bank is swapping good collateral for collateral that is less good. This reduces the term premium, the nominal long bond yield falls, and the yield curve flattens. So far so good for Ben Bernanke. But because collateral is now less scarce in the aggregate, real bond yields rise - at both the short and long end of the real yield curve. Further, the inflation rate falls. That's certainly not how Ben Bernanke thinks QE works. The usual story is that QE will cause real bond yields to fall and inflation to rise. In the model, QE is a good thing to do, though.

Another interesting feature of the model is that, if the central bank holds the short-term nominal interest rate constant at zero, and V increases, then inflation falls, and real bond yields rise. Looks like what is going on in the first two charts, right? V is a convenient catchall in the model. Including private assets in the model (loans, equity) should not be a big deal. Better private opportunities is like having a larger V, and we could also think of higher demand for domestic government debt coming from abroad as lowering V. Currently in the real world, if we think that private investment opportunities are looking better and with a better outlook on sovereign debt problems reducing the demand for U.S. consolidated government debt, we can translate this into a reduction in the scarcity of collateral in the aggregate, and a smaller V in the model. So far so good.

So what does this tell us? We're in a world where real interest rates on government debt are endogenous. Those interest rates include liquidity premia that reflect the marginal value of different classes of government debt as collateral and in financial transactions. Currently real interest rates are going up, so it should not be surprising, with the short-term nominal interest rate pegged close to zero, that inflation is falling. Conclusion: People will definitely call me stupid for saying so, but as Cartman says, screw you guys. The Fed can make all the confusing promises about the future it wants, and purchase all the assets it wants, but it may not be able to increase the inflation rate to the 2% it wants unless the nominal interest rate on reserves goes up. That's what the model says.

Holy crap, who would want to be one of those inflationphobe characters? To save myself from banishment to Krugmaniac hell, I'm going to appeal to multiple equilibria. I haven't written this up yet, but I've worked out some stuff on what happens when a naive central banker, who follows a Taylor rule, and believes erroneously that the real interest rate is exogenous, goes to work in my model. You can get two equilibria: zero lower bound, low real interest rate, low inflation, or positive nominal interest rate, high real interest rate, and high inflation. That's essentially been my point. There's nothing inherently inflationary about a large central bank balance sheet. The potential for inflation comes from how the central bank behaves given the state of its balance sheet. The multiple equilibrium story is somewhat related to this paper by Jim Bullard, with some important differences, I think.
Posted by Stephen Williamson at 12:13 PM