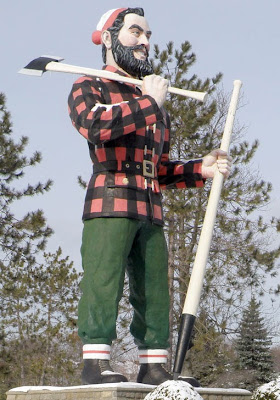 When someone is using the wrong tool, we at least hope that they're using the tool properly. For example, suppose Paul Bunyan wants to cut down a very large tree with a very small hatchet. It will certainly work better if he holds the hatchet by the handle and strikes the tree with the head, and not the other way around. Case in point: this "wonkish" post by another Paul.

Krugman obviously didn't read this post of mine, where I try to figure out what he is up to. You'll see in Krugman's post that his current preferred AD/AS configuration is Figure 3 in my post. AD is steeper than AS, and upward sloping. Here's what Krugman says about his second Figure "AS-AD with ZLB," which is my Figure 3:

Now, the reality is that prices and especially wages are sticky — which is why we don’t see runaway deflation. But that stickiness isn’t what’s keeping unemployment high, it’s just something we have to let into our models to make sense of what we see out there.

The AD/AS model Krugman has constructed is indeed a sticky wage model. If he's thinking about the quantity of output that gets determined as being less than "full employment," then the stickiness is that the nominal wage wants to rise but it can't. You would get full employment with an increase in the nominal wage, which shifts the AS curve left, and increases the price level and output. Output goes up because the increase in the price level deflates the value of private debt, and shifts the IS curve right. So what's going on in the labor market in the background of Krugman's second figure? There is an excess demand for labor. Firms really want to hire workers, but they can't find enough people to work at the market wage. That's a very funny kind of unemployment. Maybe Krugman can explain it to us.**

The other problem is that the Krugman narrative seems to be that we would be in a deflation, but for the wage stickiness that is holding up wages and prices. But what's going on in Krugman's second figure and my Figure 3 is that the increase in prices and wages that would give us full employment is being suppressed. I'm really confused.

I've been trying very hard to understand what Krugman thinks a liquidity trap is. As far as I can tell, price stickiness seems necessary to get it. But the liqudity traps I'm familiar with are summarized nicely in this paper by Cole and Kocherlakota and in a more recent paper by Ricardo Lagos. Those papers are about Friedman rules - monetary policies that will give you zero nominal interest rates forever. The basic idea is that the restrictions on the policies that will give you this are weak. That's a liqudity trap - at the zero lower bound we can alter policy in various ways and it doesn't matter. An interesting result I can get in this paper and this one is that you can get a liquidity trap away from the Friedman rule. That's due to an asset scarcity which makes the real interest rate low. If assets are extremely scarce you can have very high inflation rates at the zero lower bound. In all of those models prices are flexible. Conclusion: Liquidity traps need have nothing to do with sticky prices and wages.

**Addendum: Can't believe I woke up in the morning thinking about this. In the short run in Krugman's figure, the real wage is indeed too high, and there is an excess supply of labor, which is part of Krugman's narrative. The key problem in the narrative for this case is that the flexible price equilibrium has a higher nominal wage and higher price level, so the problem can't be a failure of wages to fall. Further, now I'm wondering how Krugman excludes Figure 4 in my previous post. That's the one where the slope of the AD curve is smaller than the slope of the AS curve and you have excessive aggregate demand. Does he know something about how strong that negative wealth effect is?
Posted by Stephen Williamson at 3:54 PM