Paul Krugman has an interesting post on Phillips curves and monetary policy. There are two pieces of "theory" at the heart of his argument: (i) the Phillips curve; (ii) the "deflationary trap." He shows us annual observations on the unemployment rate and core inflation for 2007-2014, estimates a linear Phillips curve, then argues, assuming anticipated inflation is 2% for the whole period, for an estimate of 4.9% for the natural rate of unemployment. Then, he draws a policy conclusion, which is:

Raise rates “too late”, and inflation briefly overshoots the target. How bad is that? (And why does the Fed sound increasingly as if 2 percent is not a target but a ceiling? Hasn’t everything we’ve seen since 2007 suggested that this is a very bad place to go?) Raise rates too soon, on the other hand, and you risk falling into a deflationary trap that could take years, even decades, to exit.

I'm going to use quarterly data, and link the points in the scatter plot so that we can see what's going on. Here, I'll use the pce deflator (excluding food and energy) and stick to 2007-2014, as Krugman does. This produces: 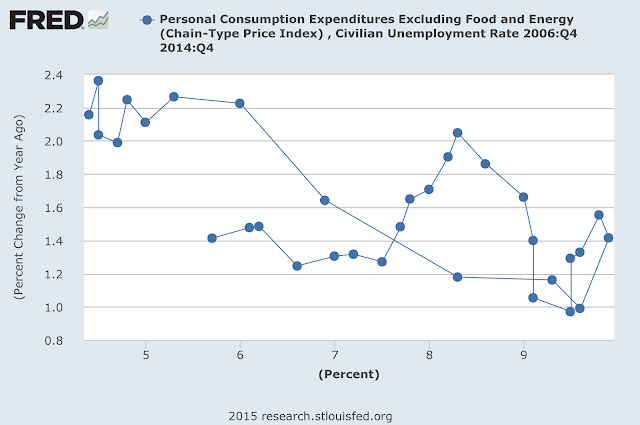 The Phillips curve is an elusive thing. Sometimes you see it in the data, and sometimes you don't. In this particular data set, the observation in the top left-hand corner is 2007Q1, and the line traces observations to 2014Q4. From 2007Q1 until unemployment reaches a peak in the recession, there is a decline in inflation that coincides with the increase in unemployment, which of course is consistent with a Phillips curve story. But, as many people have noted, the implied Phillips curve is quite flat. Over that period, there's a drop of about 0.8 percentage points in the inflation rate, coupled with an increase of more than 5 percentage points in the unemployment rate. Then, from the peak in unemployment (the observation furthest to the right) to 2014Q4, there's a drop of more than 4 percentage points in the unemployment rate, and the inflation rate does not change at all. You can see that, over this later period, the economy is hardly tracing out a Phillips curve. This makes me wonder why anyone would be confident in using the Phillips curve as a basis for forecasting inflation, or thinking about policy. I have some ideas, none of which has anything to do with sound scientific practice.

Just for good measure, we could look at a similar plot, but using the raw pce deflator without stripping out food and energy. That's the measure the Fed focuses on, of course. Here's what we get: 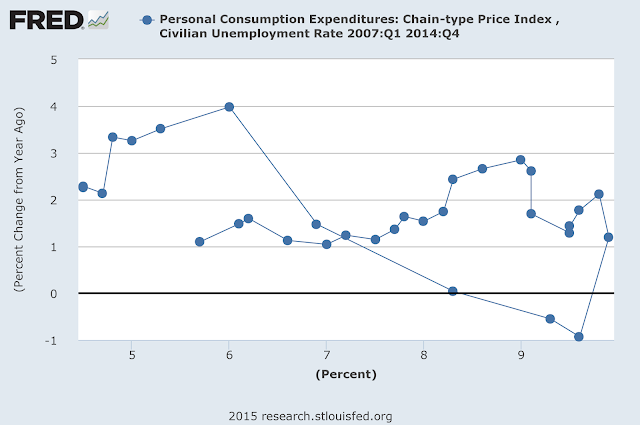 So, look again at the first sentence in the quote from Krugman's post, above. Clearly, Krugman thinks that, if the zero interest rate policy (ZIRP) continues, and barring unforeseen negative aggregate shocks, the unemployment rate will continue to decline, and the inflation rate will rise - at worst we go above 2% for a short time. But what makes the experience of the last five years make Krugman think that inflation will start to rise? We've had five years of declining unemployment and ZIRP, but no net change in the inflation rate. Further, we might look at Japan, where the Bank of Japan is an old hand at ZIRP. Here's the overnight interest rate in Japan from mid-1995: 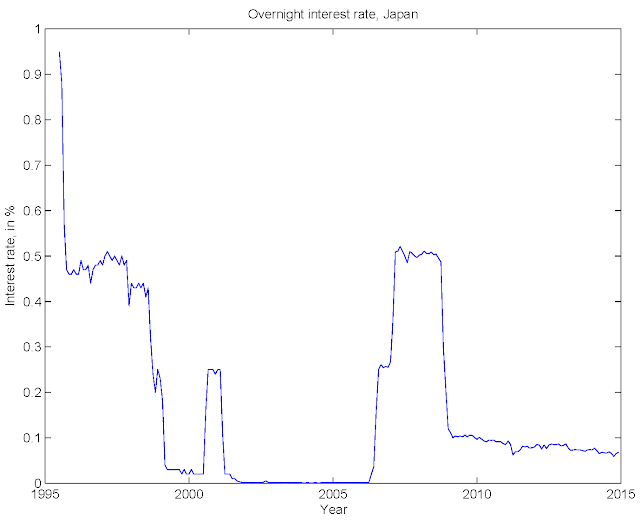 As you can see, the overnight rate has been below 0.5% for most of this period of almost 20 years, and below 0.1% for the last five years. Here's the Japanese CPI for the same period: 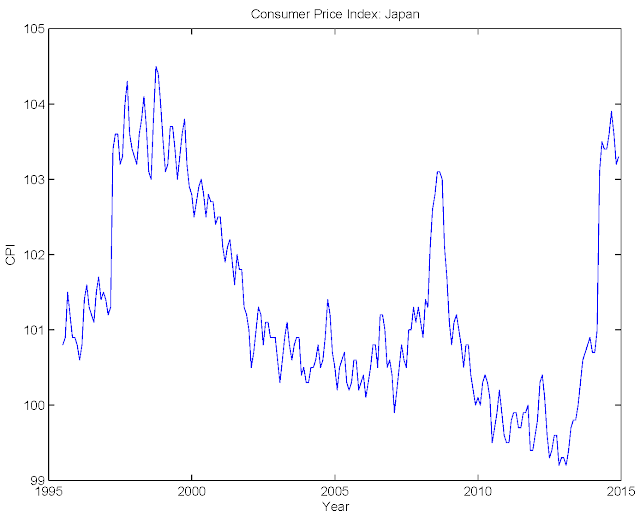 As you can see, on average the inflation rate has been about zero over the whole period (there's also a story about the last large increase in the CPI in April 2014 - that goes away if you take out the effects of the consumption tax). So, if I looked at the last two time series, that would not give me much confidence that a long period of ZIRP will produce more inflation.

Krugman's chief concern is the risk of deflation - a "deflationary trap." He's been worried about that before, and we know how that turned out. I've discussed deflation terror in an earlier post. The deflation trap is another myth, like the Phillips curve, that we would be better off without. This is in part what formal economics is for. We're forced to write down our theories in the form of internally consistent mathematical language, and subject these models to the scrutiny of our peers, and the public at large. That weeds out a lot of nonsense. The "deflationary trap," while it may sound like convincing economics, particularly when it comes out of the mouths of Larry Summers, or Paul Krugman, has no formal economics behind it. I have seen plenty of models (and have written down some myself) in which there are liquidity traps, and deflation, but I've never seen a model of what Krugman is describing - a vortex that sucks you in and won't spit you out for a very long time. On the empirical side, there's nothing to suggest that we have ever seen such a phenomenon. The Japanese experience of the last 20 years doesn't indicate that deflation is some self-sustaining trap - even given ZIRP, average inflation was zero over that period, as I already noted. Also, this paper by Charlie Plosser has some examples of how deflation need not be associated with horrible stuff.

If there is a deflation trap, or a low-inflation trap, I think it's a policy trap, as I argued in my last post. As such, Paul Krugman and Larry Summers are part of the trap phenomenon. We could start calling this the Krugman/Summers advice trap, I think.

Posted by Stephen Williamson at 1:50 PM