After the latest revisions to U.S. real GDP by the Bureau of Economic Analysis (BEA), the estimate for real GDP growth in the first quarter of 2015, seasonally adjusted at an annual rate, was -0.7%. So, have we entered a recession or what? In answering that question, we can learn something about how GDP is measured, and how seriously we want to take GDP measurement and the interpretation of quarterly real GDP growth rates.

Real GDP in the United States since the beginning of 2007 looks like this: 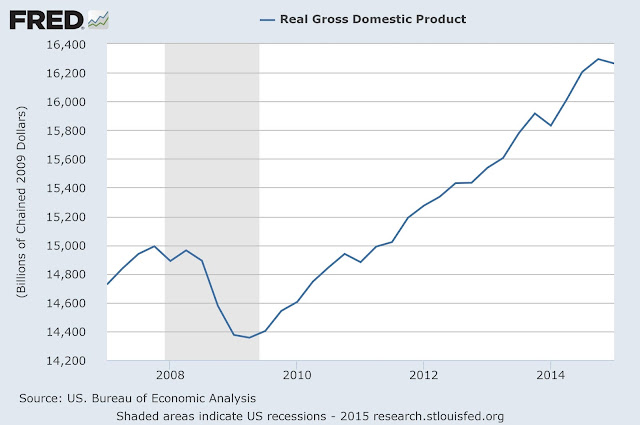 If you focus on what's happened since the end of the last recession, in 2009Q2, you'll notice that GDP has not grown in every quarter. Indeed, if we focus just on the quarterly growth rates in the first quarter, we get:

So, the average first-quarter growth rate since the end of the recession has been 0.4%, while the average growth rate over that period was 2.2%. This might make you wonder whether there is something funny going on with the seasonal adjustment of the data. The same thought occurred to Glenn Rudebusch et al. at the S.F. Fed, and they showed that, in fact, there is residual seasonality in the real GDP time series. They ran the supposedly-seasonally-adjusted real GDP time series through Census X-12 (a standard statistical seasonal adjustment filter), and came up with an estimate of first-quarter 2015 real GDP growth that was 1.6 percentage points higher than the reported number at the time (before the latest revisions). Apparently the BEA has been made aware of this problem, and is working on it.

Why do we have this problem? In the United States, the collection of economic data is a decentralized activity, conducted by several government agencies. The Bureau of Labor Statistics collects labor market and price data (why the consumer price index is a labor statistic I'm not sure), the Fed collects financial data, the Congressional Budget Office collects data on government activity, and the Census Bureau collects demographic data. Finally, the Bureau of Economic Analysis collects data for the National Income and Product Accounts (NIPA), and international trade statistics. It's this hodgepodge of data collection that makes FRED useful (shameless advertising), as FRED puts all of that data together (plus much more!) in a rather user-friendly way.

When the BEA constructs an estimate for real GDP, it uses as inputs data that comes from other sources, including (I think) some of the other government statistical agencies listed in the previous paragraph. Some of the data used by the BEA as inputs has been seasonally adjusted before it even gets to the BEA; some has not been adjusted. What the BEA does is to seasonally adjust all the inputs, and then construct a real GDP estimate. It might be surprising to you, as it is to me, that the resulting GDP estimate could exhibit seasonality. But, behold, it does. Maybe somebody can explain this for us.


As economists, what we would like from the BEA are estimates of real GDP that are both seasonally adjusted and unadjusted, for reasons I'll discuss in what follows. But given how the BEA currently does the data collection, that's impossible, and the BEA reports only seasonally adjusted real GDP. It might help if we had a single centralized federal government statistical agency in the United States, but if you have ever dealt with Statistics Canada, you'll understand that centralization is no guarantee of success. Statistics Canada's CANSIM database is the antithesis of user-friendliness. Go to their website and do a search for anything you might be interested in, and you'll see what I mean. For example, the standard GDP time series go back only to 1981, and the standard labor market time series to 1990. Why? Statisticians in the agency have decided that GDP prior to 1981, for example, is not measured consistently with post-1981 GDP, so they don't splice together the post-1981 data and the pre-1981 data. You have to figure out how to do that yourself if you want a long time series.

Getting back to seasonal adjustment, why do we subject time series data to this procedure? Many time series have a very strong seasonal component, for example, monthly housing starts: 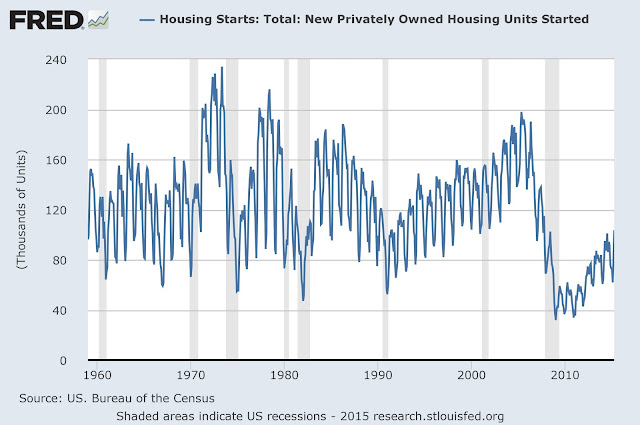 That's not too bad, as we can eyeball the raw time series and roughly discern long-run trends, cyclical movement, and the regular seasonal pattern. But try getting something out of the monthly percentage changes, where the seasonal effects dominate: 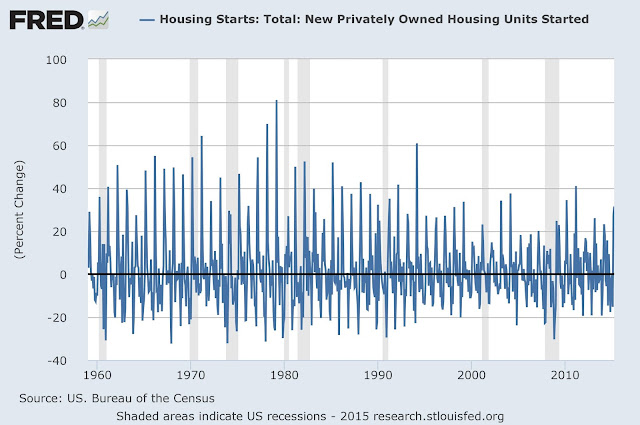 However, if we take year-over-year (12-month) percentage changes, we get something that is more eyeball-friendly: 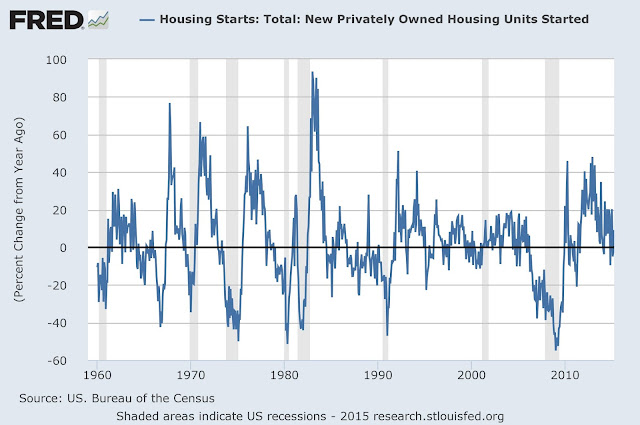 As macroeconomists or macroeconomist policymakers, if we're making use only of seasonally-adjusted data, we're throwing away information. Basically, what we're getting is the executive summary. I don't think we would like it much, for example, if the government provided us only with detrended time series data - detrended using some complicated procedure we could not reverse-engineer - and wouldn't provide us with the original time series. I have not been able to find much recent work on this, but at one time there was an active (though small) research program on seasonality in macroeconomics. For example, Barsky and Miron wrote about seasonality and business cycles, and Jeff Miron has a whole book on the topic. Is the seasonal business cycle a big deal? It's hard to tell from U.S. data as, again, the BEA does not appear to provide us with the unadjusted data (I searched to no avail). However, Statistics Canada (though they fall down on the job in other ways) publishes adjusted and unadjusted nominal GDP data. Here it is: 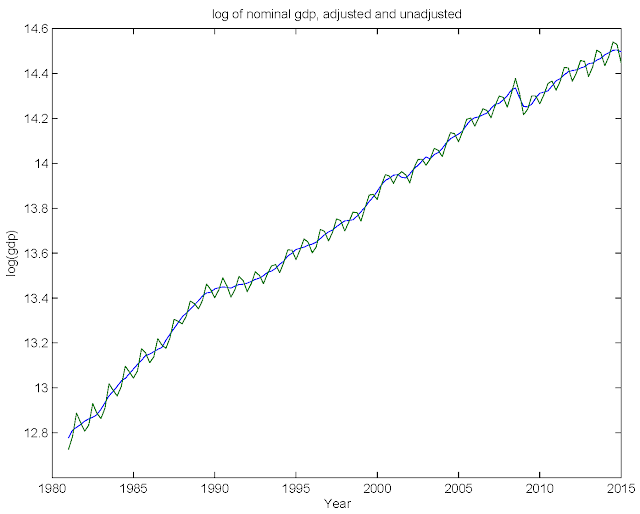 So, you can see that the peak-to-trough seasonal decrease in nominal GDP in Canada is frequently on the order of the peak-to-trough decrease in nominal GDP in the last recession. Barsky and Miron found that the seasonal cycle looks much like the regular business cycle we see in seasonally adjusted data, in terms of comovements and relative volatilities. So, the seasonal ups and downs are comparable to cyclical ups and downs, in terms of magnitude and character. Not only that, but these things happen every year. In particular, we get a big expansion every fourth quarter and a big contraction every first quarter. That raises a lot of interesting questions, I think. If seasonal cycles look like regular business cycles, why isn't there more discussion about them? There are macroeconomists who get very exercised about regular business cycles, but they seem to have no interest in seasonal cycles. How come?

Aside from seasonality, what else could be going on with respect to first-quarter 2015 U.S. real GDP? A couple of years ago, the Philadelphia Fed introduced an alternative GDP measure, GDP-Plus. As we teach undergraduates in macro class, there are three ways we could measure gdp: (i) add up value-added at each stage of production, for every good and service produced in the economy; (ii) add up expenditure on all final goods and services produced within U.S. borders; (iii) add up all incomes received for production carried on inside U.S. borders. If there were no measurement error, we would get the same answer in each case, as everything produced is ultimately sold (with some fudging for inventory accumulation), and the revenue from sales has to be distributed as income. In most countries, we don't actually try to follow approach (i), but there are GDP measures that follow approaches (ii) and (iii). In the U.S. we call those GDP (actually a misnomer, as it's really gross domestic expenditure) and GDI (gross domestic income). Over a long period of time, the two measures look like this: 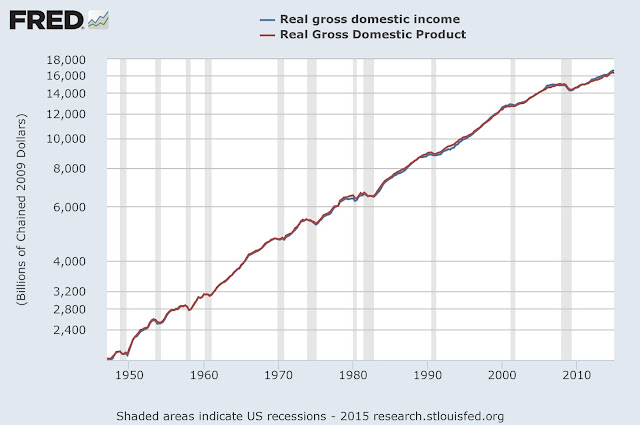 You can see that for long-term economic activity, it makes little difference whether we're looking at GDP or GDI. Over short periods of time, it does make a difference: 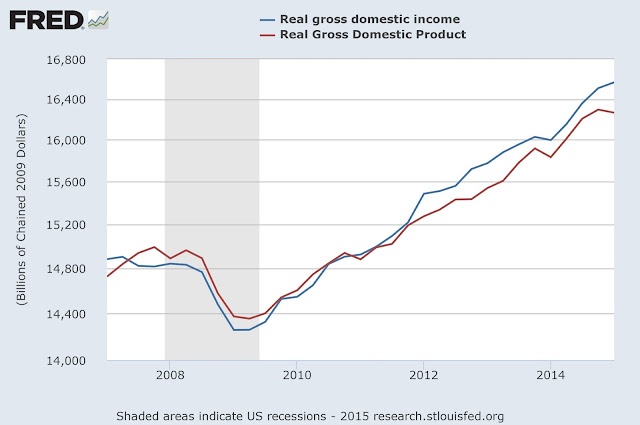 You can see in this last chart that the differences in quarterly growth rates could be large. Note in particular the first quarter of 2015, where GDI goes up and GDP goes down.

The GDP-Plus measure, developed by Aruoba et al., uses signal extraction methods to jointly extract from GDI and GDP the available information that is useful in measuring actual GDP - treated as a latent variable. The most recent GDP-Plus observation is +2.03% for first-quarter 2015. So that's another indication that the BEA estimate, at -0.7%, is off.

Further, the recent labor market information we have certainly does not look like labor market data for an economy at the beginning of a recession. Employment growth has been good: 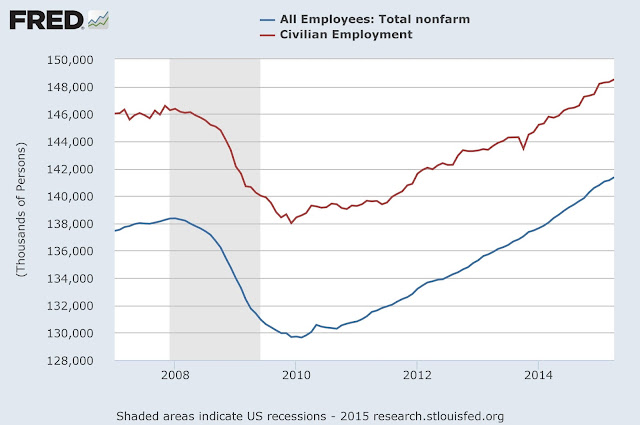 Weekly initial claims for unemployment insurance, relative to the labor force, are at an all-time low: 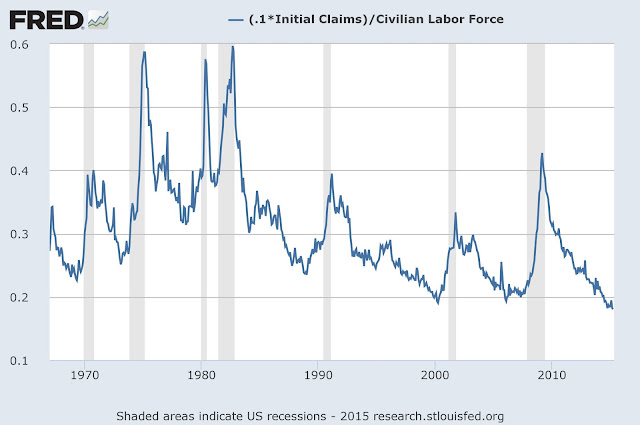 And the unemployment rate is at 5.4%, the same as in February 2005, in the midst of the housing market boom.

So, it would be hard to conclude from the available data that a recession began in the first quarter of 2015 in the U.S. But, I think the more you dig into macroeconomic data, and learn the details of how it is constructed, the more skeptical you will be about what it can tell us. Most macro data is contaminated with a large amount of noise. We can't always trust it to tell us what we want to know, or to help us discriminate among alternative theories.
Posted by Stephen Williamson at 12:09 PM