The goal in this post is to provide some more illumination with respect to Narayana's note, and my previous post. As well, if I could eliminate Nick Rowe's confusion, that would be great.

The problem at hand is one of multiple equilibria. Sometimes multiple equilibrium models are used in an attempt to explain real-world phenomena. That's Roger Farmer's approach - maybe we're stuck in bad, suboptimal states because of self-filfilling low expectations. Sometimes policy rules can lead to multiple equilibria in models we study. That's considered problematic as, to analyze policy in a coherent fashion, we would like to have a unique mapping from policy rules to outcomes, so that the optimal policy problem we're solving is well-specified. That's the problem that comes up in New Keynesian models, but it's certainly not unique to that class of models, as we'll show in the example below.

For people who work in monetary economics, multiple equilibria are ubiquitous. In any model that builds up a role for valued fiat money from first principles, there is always an equilibrium in which money is not valued - if people believe that money will not have value at any date in the future, it will never have value. Fiat money has no intrinsic payoffs, so if people believe that others will not accept it in exchange, they will not accept it either - valued money is supported as an equilibrium because everyone has the self-confirming faith that it will always be valued. So in models of fiat money, there is an equilibrium in which money is not valued, and typically many equilibria in which it is.

One old workhorse of monetary economics is Samuelson's overlapping generations model. The specific example I'm going to use comes from Costas Azariadis's 1981 paper. Time is indexed by t = 1,2,3,..., and at t = 0 there are some old people endowed with M(0) units of money. In each period there are N two-period-lived people who work when they are young and consume when they are old. Each has preferences

where c is consumption and n is labor supply. One unit of labor input produces one unit of consumption good. In equilibrium, the young work, purchase money from the old in exchange for goods, and then sell the money for goods when they're old. The government can inject money each period through lump sum transfers to the old. The money stock in period t is M(t). Assume preferences have standard properties: u is strictly concave and v is strictly convex, etc.

In equilibrium, everyone optimizes, and markets clear. There can be plenty of equilibria, including sunspot equilibria and cycles (see Azariadis's paper), but we'll focus on the deterministic ones. In general, we summarize equilibria as sequences {n(t)} that solve the difference equation

where p(t) is the price of money - the inverse of the price level.

Here's an example. Let M(t)=1 for all time, and assume u has constant relative risk aversion a, with v just n to the power b. Here, a > 0 and b > 1. Then, if we write the difference equation (2) in logs (don't know how to deal with exponents in html), we get 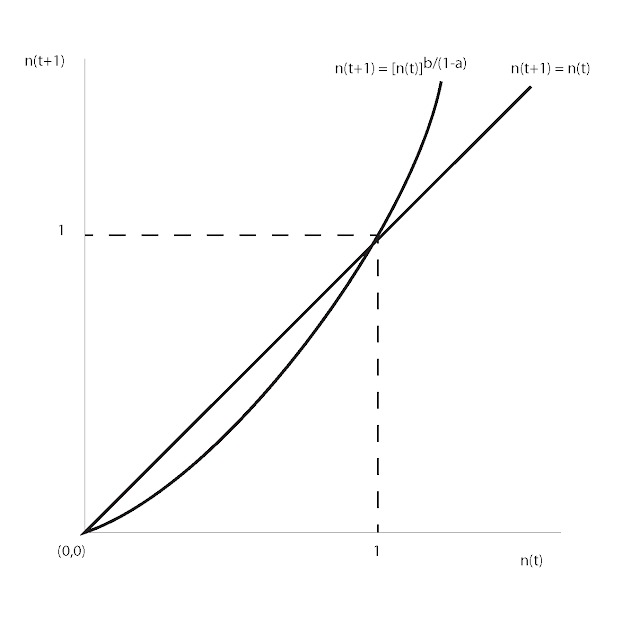 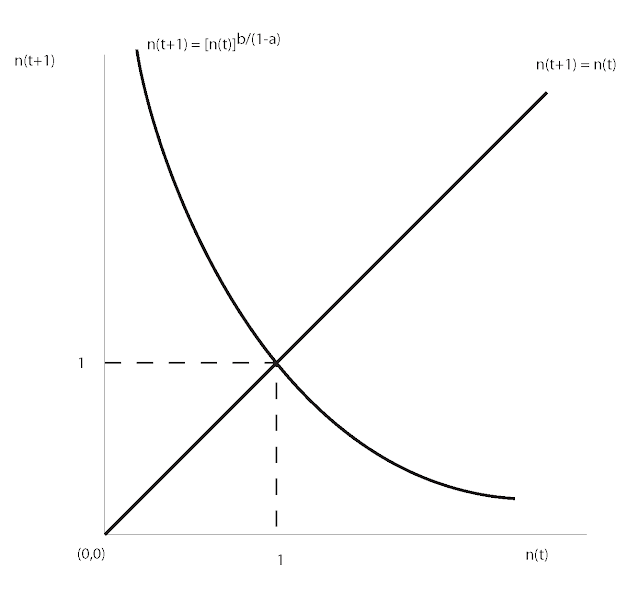 In either case, there are two steady states: (i) n = 0, where money has no value forever, and nothing gets produced. You can't see that in the second picture, but it's an equilibrium nevertheless. (ii) n = 1. The second steady state is the quantity-theoretic equilibrium. The money growth rate is zero, the inflation rate is zero, the growth rate in output is zero, and the velocity of money is constant forever. But there are also other equilibria, depending on parameters.

So, those are all the equilibria for that case (I think there are no cyclical or sunspot equilibria either - see Costas's paper). What would Narayana's note say about this? He's interested in the limiting equilibria of finite horizon economies. If we looked for such equilibria here the search is not difficult. Suppose we fix the horizon at length T, where T is finite. Then p(t)=0 for all t. No one would want to hold money in any period, because it has no value in the final period. So, the only finite-horizon equlibrium is n = 0 for any T, so if I take the limit I get n = 0. So, Narayana's claim that a limiting equilibrium of the finite horizon economy is an equilibrium in the infinite horizon economy is correct, but we only found one equilibrium by this approach - the one where money has no value.

We could take a broader view, however. Take the infinite horizon economy, fix p(T), solve the difference equation (4) backward, then let T go to infinity. In this case, the difference equation is stable backward. So, this picks out two equilibria, n = 0 and n = 1. That's an equilibrium selection device which, if we took it seriously, would permit us to ignore all the non-steady-state equilibria that converge to n = 0 in the limit. But that approach shouldn't fill us with confidence. By conventional criteria, in this case n = 0 is "stable" and n = 1 is "unstable."

Next, consider the case 1 < a < 1 + b. In this case, the slope of the difference equation in the second figure is not too steep at n = 1. In addition to the two steady states, there are now many equilibria with n(0) > 0 that converge in the limit to n = 1. Again, literally following Narayana's advice gives one equilibrium, n = 0, but if we following our other limiting approach, the difference equation is unstable backward, and there are three limiting equilibria: (i) n = 0; (ii) n = 1; (iii) a two cycle {...,0,inf,0,inf,0,inf,...}. So that's an example for which Narayana's claim is not correct, as that's not an equilibrium of the infinite horizon economy, since n = 0 is a steady state.

One problem with the model I've specified is that it permits, under some conditions, hyperdeflations in which output grows without bound. A simple fix for that is to put an upper bound on labor supply, keeping preferences as we've specifed them. That will kill off all the hyperdeflationary equilibria, as well as the limiting two-cycle we get by the Narayana method. Then, the Narayana method, taken literally, gives us one equilibrium: n = 0. The Narayana method, taken liberally, gives us two equilibria: n = 0 and n = 1. Note that Narayana's NK model is misspecified in a similar way (see my previous blog post). Given his Phillips curve, he finds equilibria for which i = inf and i = -inf. But in the first such equilibrium, output is rising at an infinite rate, and in the second it is falling at an infinite rate. An upper bound on labor supply would put an upper bound on output, and kill the first equilibrium. As well, in Narayana's model, the Phillips curve is derived by assuming that a fraction of firms charge last period's average price. So, if i = -inf the sticky price firms sell no output, but the flexible price firms have to sell some output. This puts a lower bound on output, which kills off the i = -inf equilibrium. Thus, by the liberal Narayana method, there is only one equilibrium in his NK model - the Fisherian one.

What about the literal Narayana method in his NK model? Here we have a problem. In spite of the fact that this is a cashless model, nominal bonds are traded as claims to money. But in a finite horizon model, the value of money must be zero in the final period, and thus in all periods. So the price of nominal bonds is zero. Thus, we can't even start discussing the usual NK approach, which is assuming that the central bank can set the price of a nominal bond. The central bank is stuck with a price of zero.

Of course, we can wave our hands at this point, and claim that, in a finite horizon monetary model, the price of money is pegged in the last period through fiscal intervention. But that would be a different model, and we might ask why the fiscal authority doesn't do that intervention in every period - then we're done. The central bank should abandon its assigned job and hand it over to the fiscal authority.

Here's something interesting. In line with my previous blog post, there is an optimal monetary policy in this model that kills off indeterminacy. It looks like this:

where n* solves u'(n*)=v'(n*). In equilibrium, the money supply is constant, and the policy rule specifies out-of-equilibrium actions that eliminate the indeterminacy.

Question: Does Narayana have a point? Answer: Nah.
Posted by Stephen Williamson at 12:19 PM