In most respects, President Erdogan of Turkey is not known for his progressive instincts, but in economic policy he may be the only convinced Neo-Fisherite on the planet who potentially has any power over monetary policy decisions. Erdogan has been at odds with the Central Bank of Turkey, and seems intent on changing the Bank's approach to inflation policy. In a recent interview in the UK, and recent speeches, Erdogan has made clear that he thinks that high nominal interest rates are the cause of high inflation in Turkey, and that disinflation can be achieved if the Central Bank reduces its policy rate.

Erdogan's views have been derided by market participants, and some panic ensued, manifested in a depreciation in the Turkish currency. But, apparently Erdogan's ideas aren't coming out of thin air, as his economic advisor Cemil Ertem has written a defense of Erdogan's views, which does a good job of finding the relevant supporting evidence. He cites John Cochrane's work, and speeches by central bankers, including Jim Bullard, that support neo-Fisherite ideas.

So, what's been going on in Turkey? Here's the time series of CPI inflation rates: 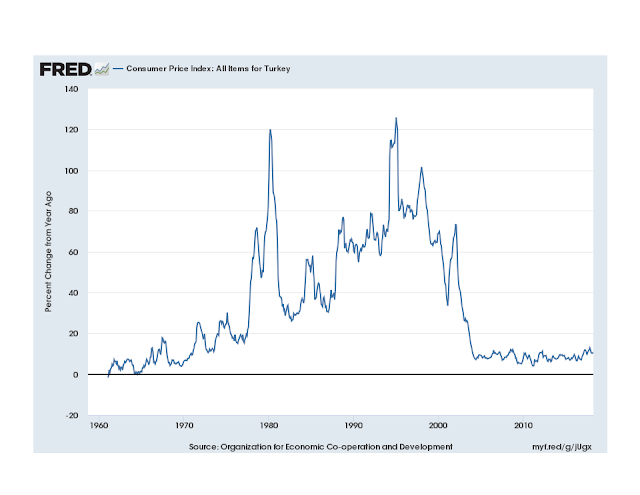 Turkey had very high inflation from the early 1980s until 2002, with the inflation rate sometimes exceeding 100% per annum. But, there was a large disinflation, with the inflation rate falling from a peak of 73% in 2002 to 7% in 2004. Since 2004, inflation has been much lower than over the previous 20 years, and much more stable. However, if we compare the path of recent inflation in Turkey with the United States, the picture looks like this: 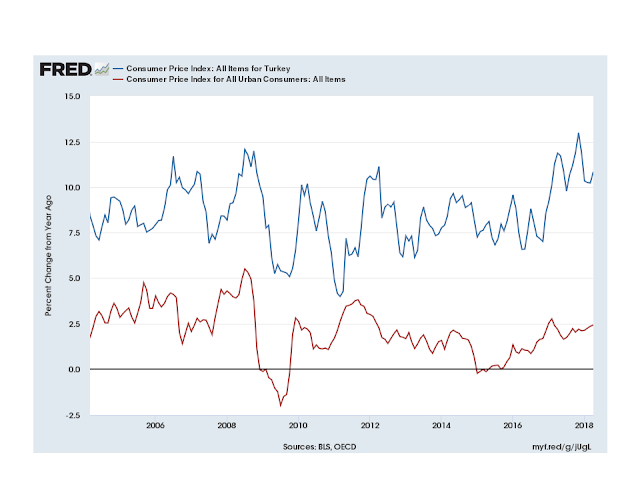 So, inflation in Turkey is still considerably higher than in the United Stages, averaging about 8% since 2004, and it has recently been creeping up above 10%. Further, the Turkish central bank has had inflation targets that it has been persistently overshooting for more than 10 years: 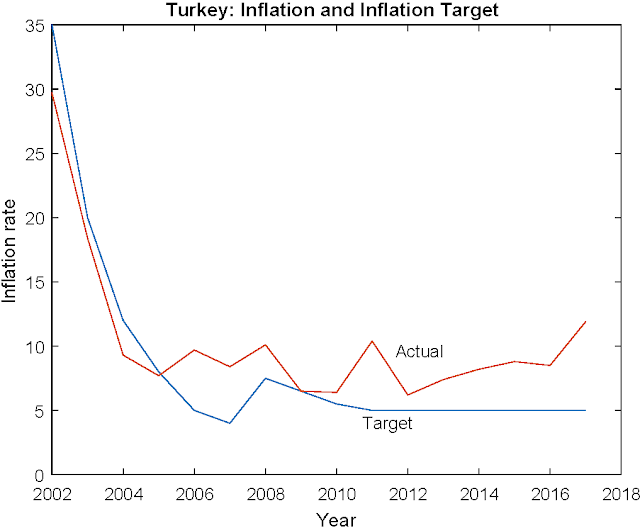 What has the Turkish central bank been doing, and what does it propose to do in an attempt to hit its inflation target? From the central bank's most recent Inflation Report:

Given a tight policy stance that focuses on bringing inflation down, inflation is projected to converge gradually to the 5-percent target...

...the disinflation process will continue in 2018 due to the decisive implementation of the tight monetary policy and convergence of economic activity and loan growth to a milder growth path.

So, that seems like boilerplate central banking. "Tight" monetary policy, i.e. a high nominal interest rate target, will lower inflation, and this disinflationary process will get some help from the Phillips curve, i.e. "a milder growth path" will reduce inflation, according to the central bank.

This is the Turkish central bank's inflation forecast: 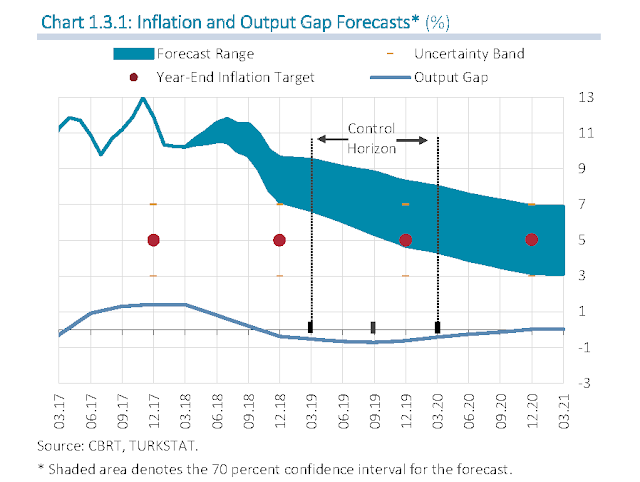 So, in a little over two years' time, the central bank thinks it will have inflation down to its 5% target. Of course, that's what it thought in 2016: 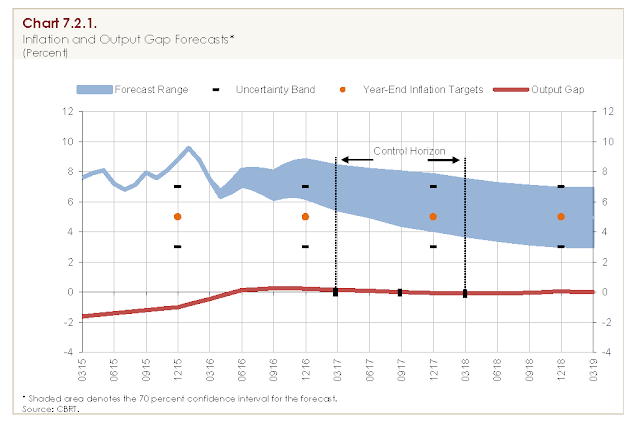 In contrast to that optimistic forecast, inflation went up, not down, in the intervening period, and is currently well outside what was denoted the "forecast range" in the 2016 forecast.

So, you might conclude that the Turkish central bank is not capable of reducing inflation. But that's a puzzler. A central bank that could reduce inflation by about 66 percentage points in a two-year period from 2002 to 2004 can't get inflation down from 7% to 5% from 2016 to 2018? What's that about? Well, what did the central bank do to produce the 2002-2004 disinflation? Let's look at the path for short-term interest rates and inflation over the same period as in the first chart. Here I'm using an overnight interbank nominal interest rate (the only short-term interest rate I could find for Turkey - if you know where to find other interest rate data, please let me know): 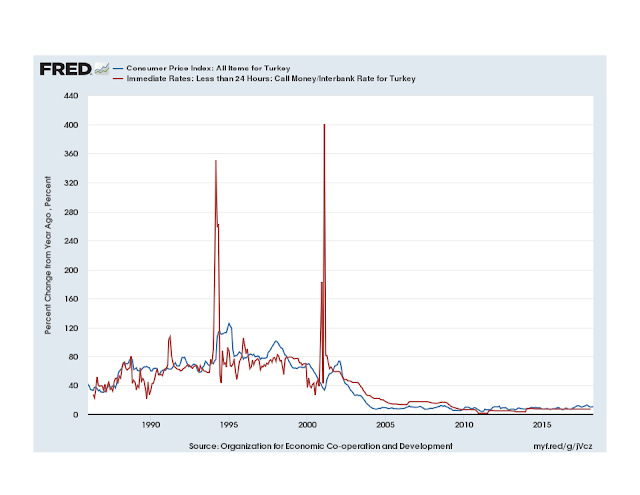 So, in that chart we're seeing a typical Fisher effect - higher inflation is associated with higher nominal interest rates. The spikes in the overnight rate occurred during 1994 and 2001 financial crises in Turkey. Next, let's focus on the disinflationary period and after: 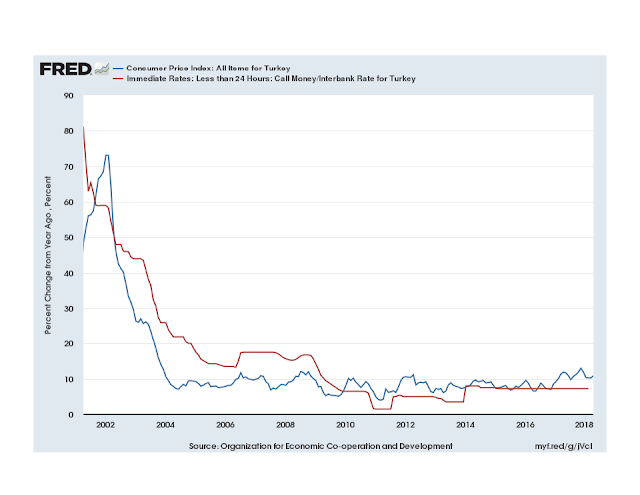 There's a lesson here for countries like Canada and the United States, where central bankers are currently hitting their inflation targets. The Bank of Canada and the Fed avoided becoming Japan - falling into the low-inflation policy trap - because they either kept nominal interest rates off zero (Canada), or lifted off from zero (US). But interest rate hikes can be overdone - the risk as that you become Turkey.
Posted by Stephen Williamson at 6:06 PM